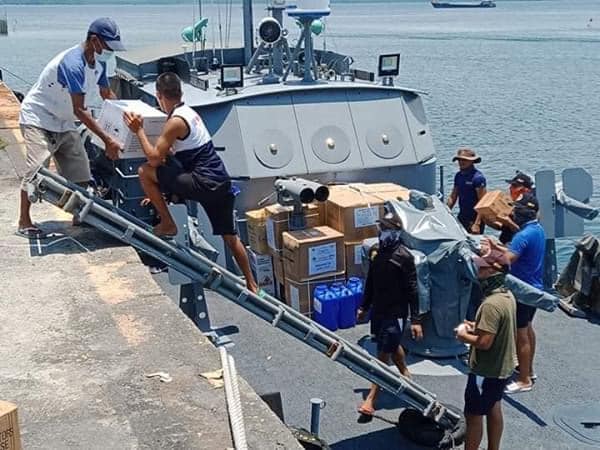 BARMM Cabinet Secretary and Inter-Agency Task Force (IATF) on COVID-19 Spokesperson Mohammad Asnin Pendatun said the Bangsamoro Government procured hundreds of PPE and medical supplies to support the healthcare and frontline workers in the island provinces in fighting the COVID-19.

The supplies, packed by the Bangsamoro IATF on COVID-19 and Rapid Emergency Action on Disaster Incidence (READI-BARMM) workforce, were transported via navy vessels of the Western Mindanao Command (WestMinCom) to the BARMM’s referral hospitals and health offices in BaSulTa.

The supplies include PPE such as hazmat suits, surgical and N95 masks, gloves; and other medical supplies such as gallons of alcohol, isolation gowns, disinfection solution, thermal scanners, and medicines.

Recently, the Bangsamoro Government has also augmented the PPE and medical supplies in the three COVID-19 referral hospitals in the region such as Cotabato Sanitarium Hospital in Sultan Kudarat, Maguindanao; Cotabato Regional and Medical Center in Cotabato City; and the Amai PakPak Medical Center in Marawi City.

The MOH has also allocated additional P20,000 to all Rural Health Units’ (RHUs) monthly Maintenance and Other Operating Expenses (MOOE) to maximize its crucial role in combating COVID-19 in the region.

“This is an initiative from the Office of the Chief Minister to intensify the LGUs’ efforts in containing the spread of COVID-19,” Sinarimbo said.

Each of the BARMM’s five provinces—Maguindanao, Lanao del Sur, Basilan, Sulu and Tawi-Tawi will receive P5 million. Its three cities—Cotabato, Marawi and Lamitan will receive P2 million each. Its 116 municipalities will receive P1 million each, while the 63 barangays in North Cotabato will receive a total of P8 million. (Bureau of Public Information)