BARMM doubles efforts to monitor the influx of LSIs, ROFs 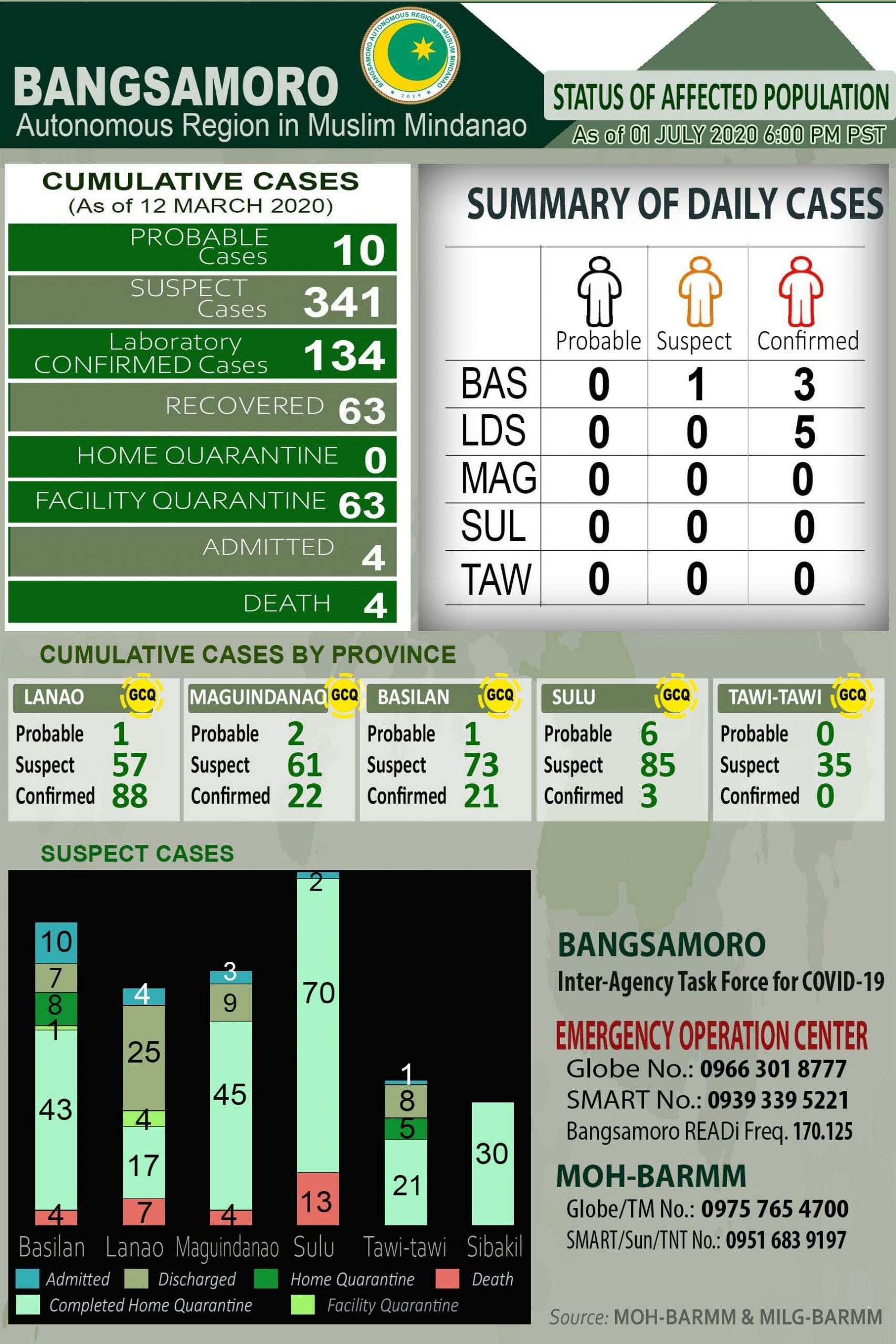 “As of today, we have 8 new cases, all of these are LSIs and ROFs, 5 in Lanao del Sur and 3 in Basilan, they are all asymptomatic,” Pendatun said.

With 67 active cases, 63 recoveries and 4 deaths, of the 134 total cases, 88 are from Lanao del Sur, 22 from Maguindanao, 21 from Basilan, 3 from Sulu, while Tawi-Tawi remains to have recorded zero cases.

Pendatun noted that more than a hundred of the total cases in BARMM are LSIs and ROFs.

“Before the ‘Hatid Probinsya’ program, we only had around 12 cases in the BARMM, but we will continue accommodating LSIs and ROFs, because we are not only duty-bound but morally bound to do so,” he stressed.

As of today, BIATF has already accommodated 6,447 LSIs and ROFs in the entire BARMM.

“We assure that we will follow strict protocols, and these LSIs and ROFs will go directly to our isolation facilities so they will not be exposed to the communities,” Pendatun said.

On Wednesday, BARMM’s Rapid Emergency Action on Disaster Incidence (BARMM-READI) has set up tents outside the Cotabato Airport in Awang, Maguindanao. This will serve as a waiting area for LSIs and ROFs before further instructions from their respective Local Government Units and Health Offices.

The BIATF is also preparing for the arrival of a conservative estimate of 5,000 deportees from Malaysia.

“We don’t have to worry because we already have an agreement with our counterparts from the government of Malaysia to have all the deportees undergo PCR testing before sending them back to the region,” Pendatun said.

He said these deportees will be returning to the region by batch every two weeks, and the first batch is expected to arrive in the BARMM this week.

“There is 395 first batch of deportees, they already have undergone testing and they all tested negative,” Pendatun stressed.

Minister of the Interior and Local Government Atty. Naguib Sinarimbo, also head of BARMM-READI, has deployed a team to Zamboanga City, on Wednesday, to facilitate the arrival of the deportees.

MGCQ in BARMM until July 15

Meanwhile, the entire BARMM remains to be under Modified General Community Quarantine (MGCQ) until July 15.

“In Maguindanao and Lanao del Sur, since they have high cases, there will be strict local action, meaning we will strictly impose the minimum health standards as per National IATF’s directive,” Pendatun said.

BARMM’s Darul-Ifta also announced the extension of its Religious Guideline No. 11, allowing the conduct of congregational prayers provided that only 50 percent of the total capacity of the mosque shall be utilized, prayer should not exceed 30 minutes, and the minimum health standards shall be strictly followed.(Bureau of Public Information)