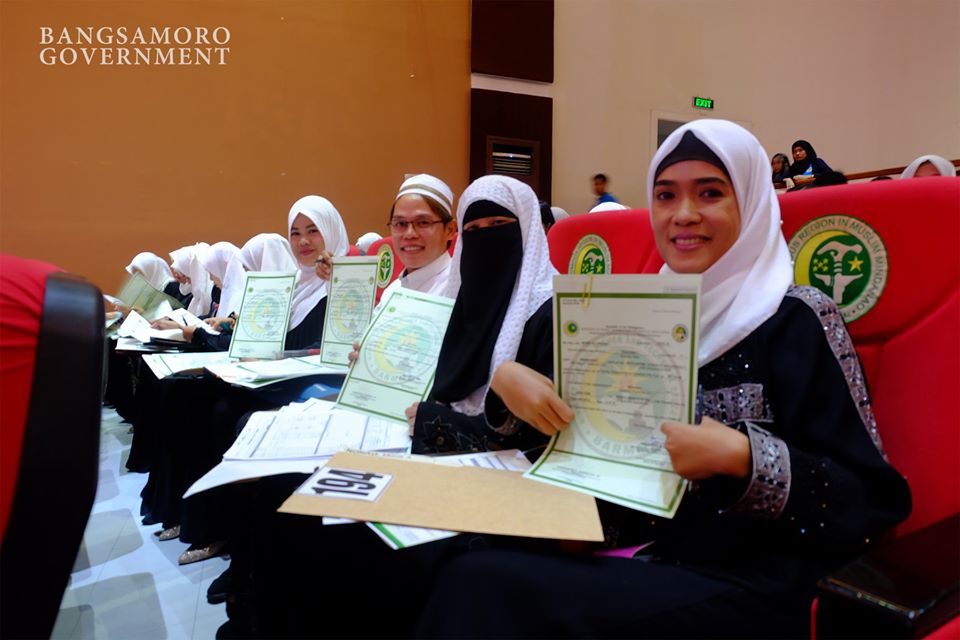 Cotabato City (February 7, 2020)—To elevate the quality of the educational system in the Bangsamoro region, the Ministry of Basic, Higher, and Technical Education (MBHTE-BARMM) hired a total of 1, 156 licensed teachers for the two districts of Maguindanao province.

569 newly-hired elementary and secondary teachers for Maguindanao I signed their appointment and deployment orders during the BARMM’s first mass signing and oath-taking ceremony on Thursday, February 6, held at the Shariff Kabunsuan Cultural Complex, Bangsamoro Government Center, in Cotabato City.

A similar ceremony was held on Friday, February 7, for the 586 newly hired teachers for Maguindanao II.

According to Education Minister Mohagher Iqbal, “Our goal is to have a balanced, inclusive, relevant, and quality Bangsamoro Educational System for our children. The vision is possible if we have quality teachers.”

“Teachers are perhaps the most influential role models for young people,” Iqbal noted, reminding the teachers to uphold the regional government’s advocacy of moral governance.

The teachers were hired after they passed a strict hiring process that includes assessment and competency examination, an interview, and a demonstration teaching.

Tarhata Balabagan, 31, who will be deployed in Maguindanao Division I, said she is thankful to the Bangsamoro Government now that she’s finally employed as a public teacher.

Balabagan said she passed her Licensure Exam for Teachers (LET) in 2017 and started her luck teaching in North Cotabato, but was unsuccessful. She then volunteered in a school in her area before applying in the BARMM.

Meanwhile, Aisah Calim, 22, also volunteered in a school in her area, with hopes that someday she will secure a teaching job just like her father. She passed the LET on December 2018.

For Balabagan and Calim, this serves as their first professional career as licensed teachers. They are now teachers for secondary students in the Maguindanao’s first district.

Chief Minister on the teachers’ mission

Bangsamoro Government Chief Minister Ahod ‘Al Haj Murad’ Ebrahim delivered a message, through his Assistant Executive Secretary Abdullah Cusain, stating that reforming the MBHTE was one of their immediate actions to ensure the region has “credible teachers on the ground to provide a high quality of education to our students.”

He said, “I hope that beyond the basic ABCs of teaching, you will also embed the importance of moral values in your classes. We hope to raise a Bangsamoro that is not just intellectually apt, but morally guided, especially with our shared values as a people.”

According to him, these licensed teachers were “given the chance to reshape this region” and “re-engineering the educational system of the Bangsamoro.”

“You have the rare opportunity of shaping an entire generation who will eventually succeed in the direction of the Bangsamoro,” he stressed.

This month, the MBHTE-BARMM will be conducting a selection and screening process for aspiring teaching applicants in the divisions of Basilan and Tawi-Tawi, while the selection process schedule for the divisions of Sulu and Lanao del Sur is yet to be announced by the ministry. (Bureau of Public Information)