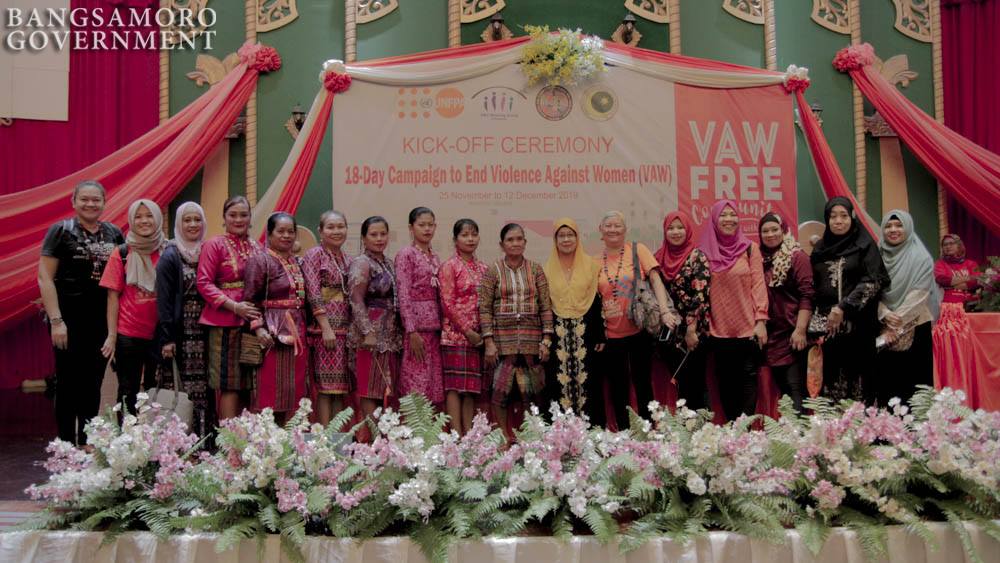 Cotabato City (November 25) – In support to the global campaign against gender-based violence (GBV), the Ministry of Social Services and Development (MSSD) and the Regional Commission on Bangsamoro Women (RCBW) kicked off today, November 25, the 18-Day Campaign to End Violence against Women (VAW) and girls.

This year’s 18-day campaign carries the theme “VAW-Free-BARMM starts with me” and will focus on three specific forms of gender-based violence such as rape, trafficking and child-marriage. It will also underscore a multi-sectoral response to the problem.

State of the Bangsamoro Women

In her State of the Bangsamoro Women Address (SOBWA), Member of Parliament Hadja Bainon Karon, RCBW chairperson, said “reports show high rate of sexual violence” in the region with the province of Maguindanao recording the highest incidence of rape in the last three years.

Most of the victims of sexual violence are minors aged 4-14 years.

MP Karon said the objective of this annual event is to raise awareness among stakeholders that VAW is a public issue of national concern.

“The fight for a VAW-free community is not just the fight of the women but also of the men,” she said. “We cannot do this alone. We need the cooperation of everyone.”

For his part, Bangsamoro Chief Minister Ahod Ebrahim, who was represented by Assistant Executive Secretary Abdullah Cusain, emphasized the important role of women in the Bangsamoro.

“It is a must for all of us to come together in reshaping the region to make sure that there is equal opportunity for everyone,” he said.

In collaboration with United Nations Population Fund (UNFPA) there will be series of events that would focus on raising consciousness on VAW and other forms of GBV; roles of women, girls and youth combating VAW; and promoting programmatic approach to end VAW in the region.

There will be a ‘Youth Forum on Child Marriage’ on November 28 where youth of different schools and out-of-school youth organizations around Cotabato City and Maguindanao areas will gather to learn more about child marriage and its health implications from Islamic perspectives.

A ‘Referral Pathway’ will be launched on December 12. It aims to provide direction and guidance to survivors/witnesses of child protection issues and gender-based violence. (Bureau of Public Information)