BARMM, Military, and Police to conduct parallel investigation on mortar shelling in Maguindanao 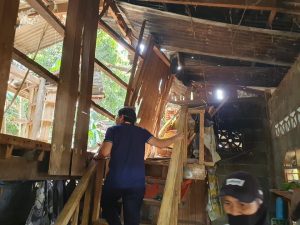 Cotabato City (May 26, 2020) —The Bangsamoro Government, through its Ministry of Interior and Local Government (MILG), the Armed Forces of the Philippines’ (AFP) Western Mindanao Command (WestMinCom) through its 6th Infantry Division (6ID), and the Philippine National Police (PNP) will conduct a parallel investigation on the recent mortar shelling in Maguindanao that killed two (2) minors and wounded several others.

MILG Minister Atty. Naguib Sinarimbo on Monday, May 25 said he met with WestMinCom’s Lieutenant General Cirilito Sobejana and 6ID’s Major General Diosdado Carreon to plan for the investigation in order “to get to the bottom of this incident and to avoid making hasty conclusions pending the completion of the investigations.”

Sinarimbo, who is also the spokesperson of BARMM, assured that the Office of the Chief Minister (OCM) will take care of the needs of the victims.

“He (Chief Minister Ahod ‘Al-Haj Murad’ Ebrahim) has directed the appropriate offices in the regional autonomous government to conduct an impartial investigation to unearth the truth,” Minister Sinarimbo stressed.

The minister, on Monday, also visited Sitio Amai Zailon, Barangay Kitango in Datu Saudi Ampatuan municipality —where the mortar shelling happened— to conduct site inspection and community dialogue with the victims, including the father of the two minor female victims who died.

“We also visited the victims both at the Cotabato Regional and Medical Center (CRMC) and Maguindanao Provincial Hospital to provide them assistance and learn the facts first hand from them,” Sinarimbo said.

Early on, the Bangsamoro Government issued condemnation against the violence that took lives of innocent minors and injured many others including the mother of the victims.

“This violence committed against hapless civilians is totally inhumane and evil, occurring as it did on what is supposed to be a festive day of Eid’l Fitr,” the statement underscored.

The statement also stressed that the violence “also compounds the present difficulties of our people as they struggle through with the COVID-19 pandemic. Only the heartless criminals can commit such a wicked act.”

Meanwhile, the Bangsamoro Human Rights Commission will also conduct separate investigation to secure justice for the victims of the tragedy.

On Sunday, May 24, around 4 p.m., an alleged 81-mm mortar projectile hit at least four (4) houses in Barangay Kitango that killed two kids, aged ten (10) and seven (7) while, 14 others were injured. (Bureau of Public Information)