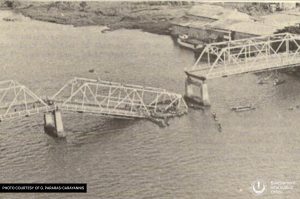 Photo of Quirino Bridge in Cotabato City destroyed by the massive earthquake on August 17, 1976. (Photo from G. Pararas-Carayannis)

Eleven minutes past midnight of August 17, 1976, while people were in deep sleep, an 8.0-magnitude earthquake rocked the Moro Gulf in Mindanao. The initial widespread trembling was felt as far as the central islands of Visayas.

Approximately 10 minutes later, without any warning, the violent temblor spawned a tidal wave or ‘tsunami’ about 9 meters high that washed the residents away.

The tsunami affected 700 kilometers of coastline bordering the Moro Gulf in the North Celebes Sea, resulting in destruction and death in the coastal communities of the Sulu Archipelago, Southern Mindanao, and in Zamboanga Peninsula.

It was believed to be the deadliest and strongest quake in the archipelago within 58 years since the 1918 Celebes Sea 8.3-magnitude earthquake that struck the Moro Gulf. According to reports, 8,000 people were officially counted as dead or missing, 10,000 injured, and 90,000 homeless, making it one of the most devastating disasters in the history of the Philippine islands.

The tsunami caused 90 percent of the deaths in Lebak, Sultan Kudarat; Alicia Sibugay, Basilan, and Sacol island in Zamboanga peninsula; and in Jolo, Sulu.

A story of horror

Reports said Cotabato City was the most badly hit in terms of casualties and infrastructure damages. In a city of 100,000 population, 1,500 died when housing blocks, restaurants, a college building, and a two-storey hotel collapsed.

In Pagadian, its coastal also grieved over 2,000 fatalities, many of the victims already had bloated bodies after being recovered from the seashores. Some corpses were buried in mud. Meanwhile in Zamboanga City, 14 buildings were partially damaged. The city was spared from serious damages by the tsunami because of both the Basilan and Sta. Cruz islands served as a buffer and diverted the ravaging tidal waves.

At present, President Ferdinand Marcos, Jr. emphasized in his State of the Nation Address (SONA) in July 2022 that natural disaster response should be prioritized and intensified.

“Capacity building for our natural disaster resiliency is, therefore, a must. Investment in science and technology is imperative to enable us to have accurate weather forecasts and on-time disaster alerts,” he said.

In the Bangsamoro region, its government capacitated its communities and component local government units on the importance of preparedness and capability-development against the risks of any disaster. Recently, the Bangsamoro Rapid Emergency Action on Disaster Incidence (READi) concluded its training for Incident Command System (ICS) with 84 new graduates.

The ICS is a disaster response system that integrates the complex inter-agency structures of various agencies during operations institutionalized by virtue of NDRRMC Memorandum Circular No. 4, series of 2012.

Recently, tremors are felt in some parts of Mindanao and brought concern to people living in coastal areas. In the month of August alone, three strong quakes above magnitude 5 shook the island; 5.6-magnitude on August 2 in Lebak, Sultan Kudarat, a 5.8-magnitude jolted South Upi, Maguindanao on Aug. 13, and another 5.6-magnitude quake in Magsaysay, Davao del Sur.

Last July 27, 2022, a 7.0 magnitude quake destroyed Bangued, Abra province, in Luzon. Approximately Php1.6 billion worth of damages to infrastructure and agriculture was recorded.

The vulnerability of the Philippines to natural disasters is not surprising to many because of its geographical location along the typhoon belt and the Pacific Ring of Fire, where the most volcanic and seismic activities are recorded.

Despite these perennial natural catastrophes, the Philippine government continues to develop strong defense strategies and its people remain climate-resilient citizens.

The 1976 massive earthquake did not just leave a story but a lesson that preparedness and resilience will save a lot of lives come the emergencies. (Majid Nur/Datu Norhamidin Mamasainged)