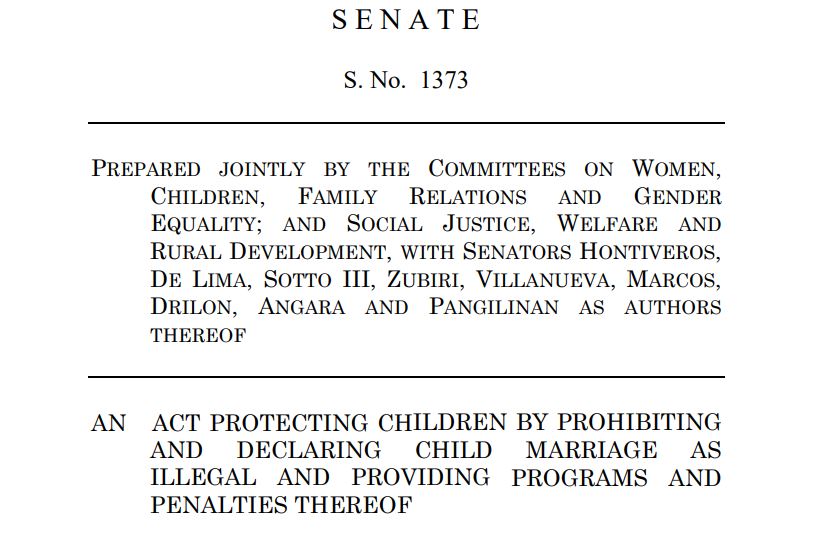 COTABATO CITY – The Bangsamoro Autonomous Region in Muslim Mindanao (BARMM) Government has submitted its position paper on Senate Bill 1373 or the “Girls not Brides Act” that declares child marriage illegal.

In a letter addressed to the Senate and House of Representatives dated September 13, 2021 and signed by BARMM Chief Minister Ahod B. Ebrahim, the Bangsamoro Government reiterated its position on the proposed legislation and reechoes the need to be more responsive on issues on child marriage and exploitation.

The four-page position paper also highlights the unique context of Muslim Filipinos and indigenous communities and the need to reconsider the bill’s application to the said sectors.

Exemptions on its applications

The Bangsamoro Government hopes that the application of the bill not be made to Muslim Filipinos and indigenous peoples.

According to the position paper, “certain provisions therein are antithetic to established laws, Islamic principles, and other cultural practices.”

It further highlights that by criminalizing early marriages among Muslims, it will instigate litigation among immediate family members at the expense of the family as a social institution whose unity and harmony the Shari’ah and Constitution seek to maintain and protect.

The regional government states that its position is principally founded on the provisions of Presidential Decree No. 1083 or the “Code of Muslim Personal Laws in the Philippines.”

The said decree recognizes the legal system of the Muslims in the Philippines as part of the law of the land and seeks to make Islamic institutions more effective.

The position paper stresses that PD No. 1083 provides that marriage between Muslims, even below 15 years, is permissible, subject of course to the essential requisites of marriage under Article 15 of the same law.

The Bangsamoro Government, however, stays committed in promoting, protecting, and recognizing the rights and welfare of the Bangsamoro people and those residing therein.

Chief Minister Ahod B. Ebrahim says that the position of the Government of the Day is aligned with their mandate in Republic Act 11054, otherwise known as the “Bangsamoro Organic Law,” where various ministries are provided for the duty to address concerns such as child marriage.

“The Bangsamoro Government remains steadfast in promoting the rights and welfare of our children. We will not let any individual take advantage of our dear children. Several ministries, agencies and offices are tasked to monitor cases of early child marriages in the region and assure that there are no exploitations taking place,” Ebrahim said.

In a forum conducted by the Bangsamoro Women Commission (BWC) concerning the similar topic on October last year, Senior Minister Abdulraof A. Macacua said that the Bangsamoro Government reaffirms its commitment to promote the welfare of young girls, and to ensure that they are protected at all times, especially in this difficult time of pandemic.

“As we transition towards change, we should also be preparing the future leaders of the Bangsamoro,” Macacua added. (Bangsamoro Information Office)