Bangsamoro region ranks 5th in terms of economic growth in 2018 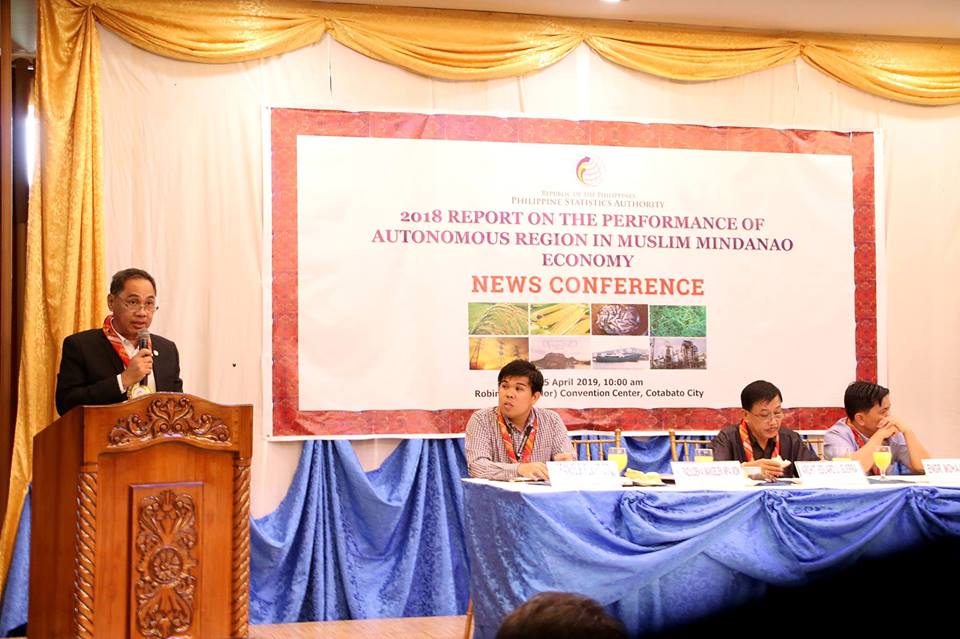 Cotabato City (April 25, 2019) – The Autonomous Region in Muslim Mindanao (ARMM), which now make up the core territory of the Bangsamoro Autonomous Region, ranked fifth among the 17 regions in the country in terms of regional economic growth for year 2018.

This was announced by Razulden Mangelen, Director of the Philippine Statistics Authority – BARMM, during a news conference held here on Thursday, April 25. He said that in 2018, the region has posted a 7.2 percent growth rate in its Gross Regional Domestic Product (GRDP).

With 55.6 percent contribution, Agriculture, Hunting, Forestry and Fishing (AHFF) remained to have the largest share in the region’s total economic performance. It is followed by the Services sector with 38.5 percent, and Industry sector with 5.9 percent.

“ARMM or the now BARMM, remains as persistent and predominantly agriculture based,” said Mangelen.

In 2015, the ARMM’s economy contracted and registered a negative 0.4% growth rate. It partially recovered in 2016 with a positive 0.3% increase. While in 2017, its growth rate peaked at 7.3% – the highest economic growth rate in the region’s history.

In his message read by Finance Minister Eduard Guerra, Bangsamoro Chief Minister AlHaj Murad Ebrahim said the region’s growth rate proves that the Bangsamoro can be at par with other regions. “This is a great development for us. Your Bangsamoro Government vows to continue this feat as part of our moral governance,” he said.

Since the establishment of the new Bangsamoro government, Ebrahim said investors have signified their interest in investing in the region. “Numerous entities have trusted and showed support in generating jobs for the Bangsamoro people. It will help with the growth of our GRDP,” he said.

He ended his speech by directing all the Bangsamoro ministries to “have an in-depth study and find the factual causes in order to provide a real solution to the poverty situation in the BARMM”.