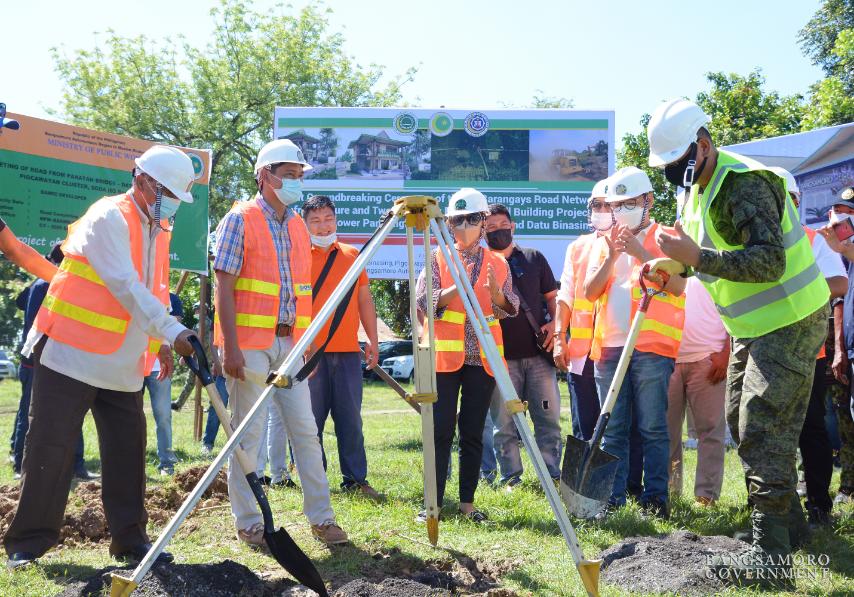 COTABATO CITY – A sixty-three (63) kilometer road network is expected to improve the transport connectivity in the 63 barangays of North Cotabato province under the Bangsamoro Autonomous Region in Muslim Mindanao (BARMM).

This was following a joint ground breaking ceremony for the concreting of roads in the barangays and construction of two-storey barangay halls for the villages of Lower Pangangakalan, Lower Baguer, and Datu Binasing in Pigcawayan municipality of the province.

According to Minister Guerra, a one kilometer road worth Php16-million will be constructed to each of the barangays. He further said that this year’s budget for infra projects in the 63 barangays is worth Php1.8-billion.

He also mentioned that the Bangsamoro Government is planning to group the 63 barangays into 5-7 municipalities which can qualify as one (1) province.

Meanwhile, Minister Sinarimbo said that the barangay halls in Lower Pangangakalan, Lower Baguer, and Datu Binasing in Pigcawayan shall be worth Php3.5 million each. It will be funded through the Ministry of Interior and Local Government’s (MILG) Local Government Facilities Development Program (LGFDP).

“We have to ensure that we will provide better services for our people, especially those on the far flung communities,” Sinarimbo said.

This year, MILG have already started the construction of infrastructure projects such as executive halls, public markets, and legislative buildings all throughout the region.

For her part, Governor Catamco praised the BARMM government for always prioritizing the needs of its people, especially those in the 63 barangays who opted to be included in the Bangsamoro territory.

“Truly, the newly established government is the best example of a good governance,” Catamco said.