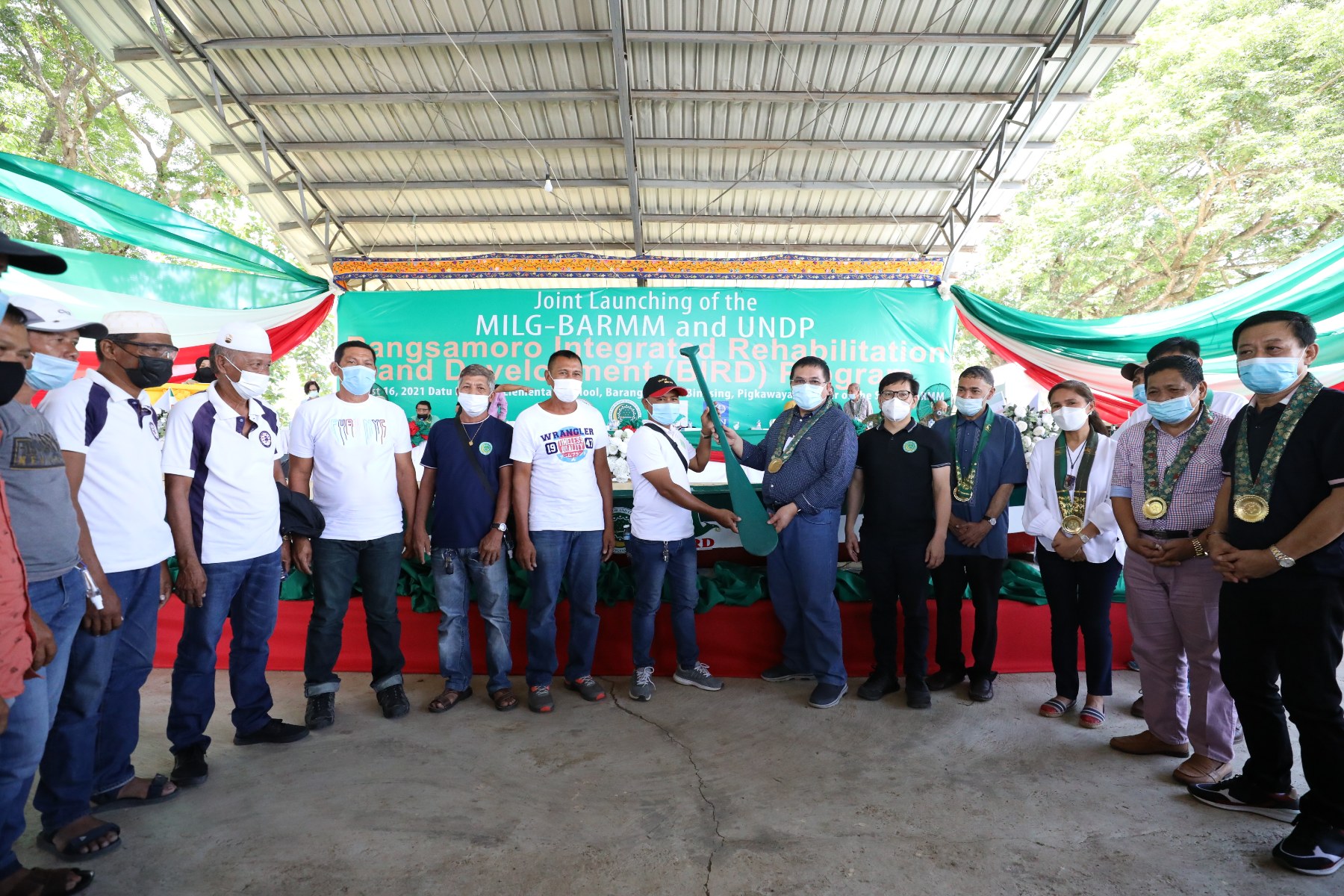 Fishermen in Libungan Marsh received motorized ‘banca’ during the launching of the Bangsamoro Integrated Rehabilitation and Development (BiRD) Program on Monday, Aug. 16, in Pigcawayan, North Cotabato.

NORTH COTABATO—Simultaneous community infrastructures and livelihood projects under the Bangsamoro Integrated Rehabilitation and Development (BiRD) Program, intended for BARMM’s Special Geographic Area (SGA), were launched and inaugurated on Monday, Aug. 16, at Brgy. Datu Binasing, in Pigcawayan Municipality in this province.

Spearheaded by the Ministry of Interior and Local Government (MILG) and the United Nations Development Program, the BiRD program will run for at least five years. It is a convergence plan of all BARMM ministries which aims to improve the lives and transform the conflict-affected areas of Bangsamoro communities.

Monday’s event highlights the inauguration and soft opening of the 900-meter of road linking the 63 barangays to the BARMM, illumination of newly installed solar street lights of the Brgy. Datu Binasing, and initial handover of 20 out of 100 units of motorized Banca for target fishermen beneficiaries, and provision of wheelchairs for Persons with Disabilities (PWDs).

Further, also part of the activity is recognition of 150 Bangsamoro widows of the late ‘Mujahideens’, who were given food items (10 kilos of rice, canned goods, coffees, vitamins, and facemask), and received an initial tranche of cash assistance worth Php25,000.00.

BARMM Spokesperson and MILG minister Atty. Naguib Sinarimbo underscored that it is important to address the immediate needs of the Bangsamoro constituents and provide them long-term sustainable development programs.

The components of the program, he said, are strengthening governance in barangays through capacity building programs, rural infrastructure development, and livelihood program.

Twelve (12) barangays of Pigcawayan Cluster will benefit from the initial various projects implemented with funding from the Special Development Fund (SDF) of the Bangsamoro Government.

BARMM Senior Minister Abdulraof Macacua, representing Chief Minister Ahod B. Ebrahim, reiterated that BiRD Program includes all the areas of the Bangsamoro region, and the regional government is currently focusing on the first phase which is the 63 barangays under the SGA.

Meanwhile, Cotabato Province Governor Nancy Catamco affirmed her support for the proposed extension of the Bangsamoro Transition Authority (BTA) and postponement of the first regional parliamentary election in BARMM.

Samaya Kintua, 70, widow of a Mujahideen and a resident Brgy. Lower Baguer expressed her thanks and gratitude to the Bangsamoro Government leaders for the livelihood assistance and recognition they received.

[We appreciate the relief assistance provided by our leaders to communities in far-flung areas. We wish them good health and longer life.]