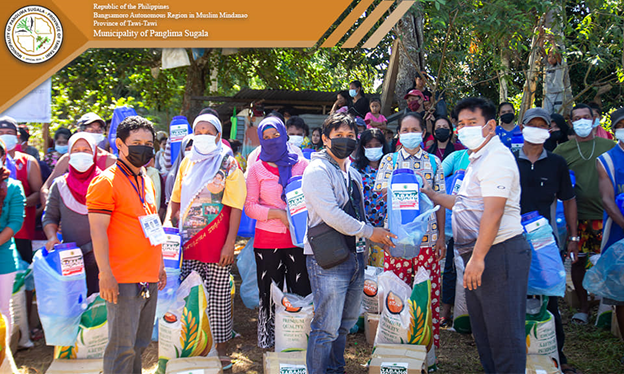 Mayor Nurbert Sahali (right) personally led distribution of Project Tabang to the displaced families of 90 affected by the re-acquisition of a military reservation area at Ems barrio in Batu-Batu, Panglima Sugala, Tawi-Tawi.

TAWI-TAWI—A total of 229 out of 600 target beneficiaries have already received aid from the Project Tulong Alay sa Bangsamoro Nangangailangan (TABANG) in local government unit (LGU) of Panglima Sugala as of August 18, this year as it continues to roll out aid to marginalized sector of the Bangsamoro region.

Atara said, the first distribution was conducted on July 27, during the medical mission of the LGU to Barangay Tongbangkaw, where 100 beneficiaries received 1 sack rice (25kg), 1 family food pack, and 1 blue water container each from the Project TABANG.

The second wave of distribution, Atara added, was on August 17 to some 39 identified recipients of Barangay Silubbug in Buan (most remote area in the municipality), who also received similar aid from the same project.

Meanwhile, 90 displaced families affected by re-acquisition of military reservation at Ems Barrio of Barangay Batu-Batu, who were relocated by LGU Panglima Sugala to a new site and identified as beneficiaries composed the third wave of recipients, obtained similar aid from Project TABANG.

The LGU also helped each of them with 10 pieces of GI sheets, eight gypsum boards, 1 sack of (25 kls) rice, and cash assistance to erect their shelters.

Mayor Nurbert Sahali personally partook in the distribution of the Bangsamoro Government Project TABANG to the beneficiaries of Panglima Sugala.

“In the name of public service, I will do my best for the people of this municipality […] I am so much grateful to the Bangsamoro Government for the help through this Project TABANG, which manifests the true concern of the BARMM to its marginalized constituency,” Mayor Sahali said.

Meanwhile, Atara said the distribution will continue simultaneously with the identification of more beneficiaries by the LGU. (Bangsamoro Information Office)