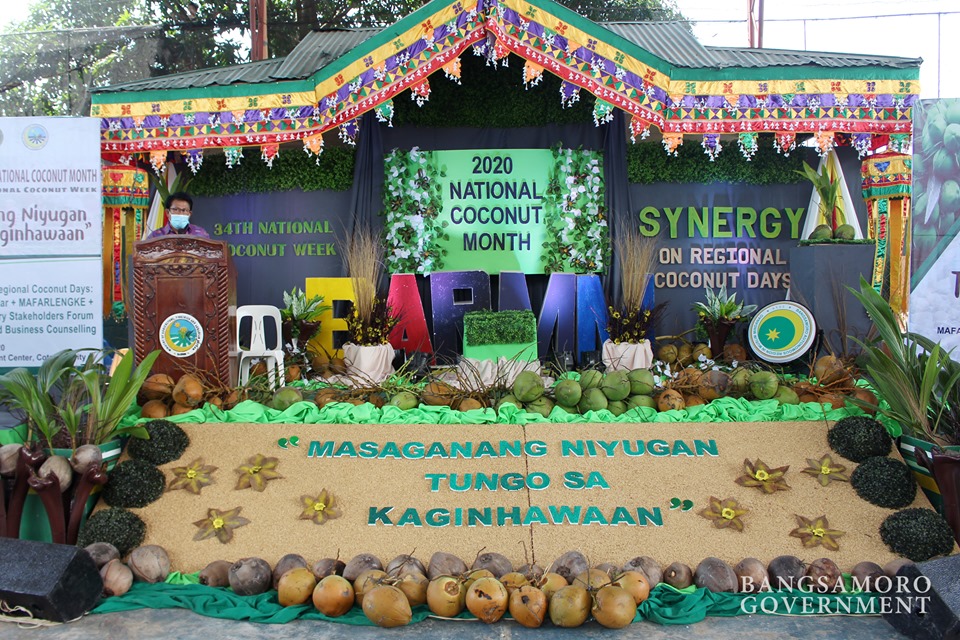 Cotabato City (August 25, 2020)- Bangsamoro Government Chief Minister Ahod “Al Haj Murad” Ebrahim said that in a region like that of Bangsamoro, which is heavily reliant on agriculture, a strong coconut industry can translate into economic opportunities for everyone even outside its core territory.

CM Ebrahim said this during the kick off ceremony of this year’s national coconut week celebration in the region on Tuesday, August 25, held at the Bangsamoro Government Center in the city.

The ceremony was spearheaded by the Ministry of Trade, Investment and Tourism (MTIT), Ministry of Agriculture, Fisheries and Agrarian Reform (MAFAR), and the Department of Agriculture-Philippine Coconut Authority (PCA XIV-BARMM).

Ebrahim emphasized in his video message that the work that PCA XIV-BARMM brings to the ground has been fundamental in the growth of the region’s economy.

“PCA brought the coconut hub projects, the exportation of coconut products and its upcoming tie-ups with MAFAR and MTIT,” he added.

“I am personally grateful to see the partnership inked between the PCA, MAFAR and MTIT to continuously help our thriving coconut industry. After all, the socio-economic diversity and potential of this industry crosscuts various agencies and sectors,” CM Ebrahim said.

Among the highlights of the coconut week celebration in the region, which will run from August 25-27, include exhibits, forums, and business lectures dubbed “Synergy on Regional Coconut Days: Coco Bazaar+ MAFARlengke + Regional Coconut Industry Stakeholders’ Forum + Business-to-Business Matching and Business Counselling”.

MAFAR Minister Mohammad S. Yacob said that this year’s theme brings with the unified goals of ensuring abundant harvest and sustainable income for the growers and entrepreneurs in the region.

“This activity is one way to raise the morale of coconut growers by providing them a venue and chance to prove technically and to display their products with a possible connection to the market,” Yacob said.

Meanwhile, PCA-XIV BARMM regional manager Marina B. Wahab, shared that currently the coconut farmers is composed of roughly more than ¼ of the population of BARMM.

“Let us patronize our local products and improve the quality of lives of the Bangsamoro people,” Wahab said.

Wahab shared that initially, BARMM had no processing centers and most of the local products are transported to the other neighbouring regions.

Furthermore, MTIT Minister Abuamri A. Taddik stressed the importance of collaboration to further improve the agriculture industry in the region.