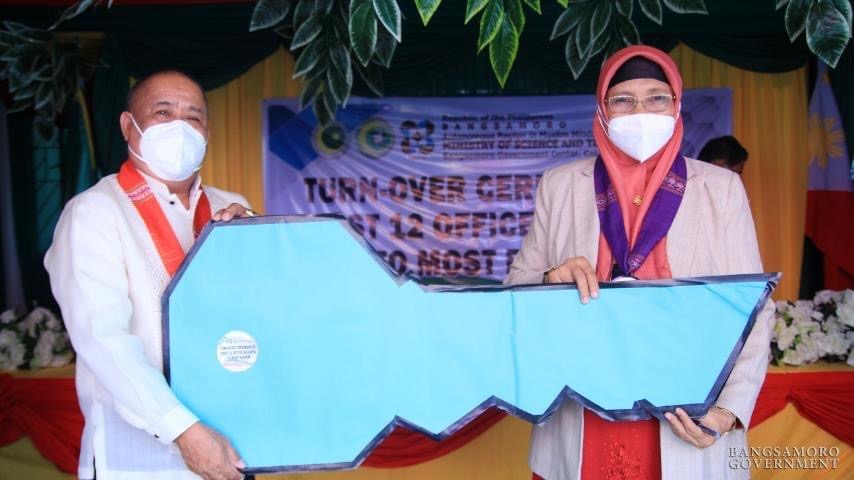 A ceremonial turning over of key between DOST-12 and MOTC-BARMM was held on Thursday, March 25, 2021.

MOST Minister Engr. Aida Silongan and DOST-XII Regional Director Engr. Sammy Malawan led the signing of Memorandum of Agreement (MOA) and ceremonial turning over of key on Thursday, March 25, in Cotabato City.

In her speech, Silongan expressed her appreciation to the prompt action of the DOST to formally entrust the said facility.

“After a series of negotiations with the DOST-XII, we are now at the final stage of the lot and building hand-over to the Bangsamoro Government,” she said.

DOST-XII RD Malawan emphasized that they are open for a new level of collaboration, particularly in the development of the halal industry.

“We hope that partnership between us will be strengthen. We are happy to mention that DOST-12 Philippine National and Laboratory Center is open for collaborative undertakings,” he added.

Meanwhile, Assistant Executive Secretary Abdullah Cusain emphasized the importance of science and technology for the economic development in the region.

As stated in the Bangsamoro Organic Law (BOL) Article 16, Section 11, “Properties and and assets shall be transferred to the Bangsamoro Government within three (3) months from the organization of the Bangsamoro Transition Authority (BTA), except those properties, land, and structures located outside of the Autonomous Region in Muslim Mindanao. Furthermore, the transfer of properties and assets is without prejudice to the power of the BTA to organize the bureaucracy during the transition period.” (Bangsamoro Information Office)