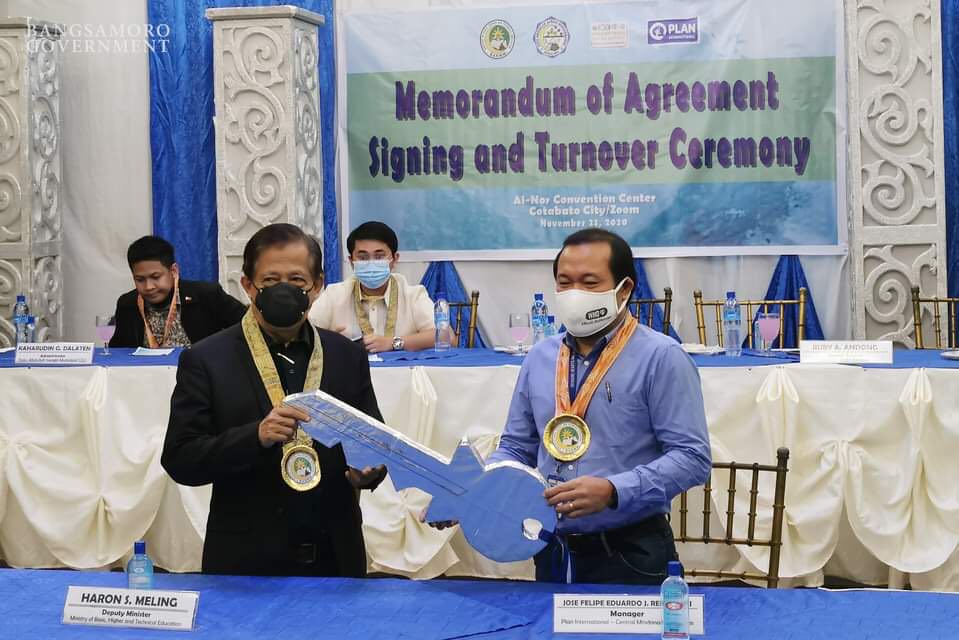 COTABATO CITY – Ministry of Basic, Higher, and Technical Education (MBHTE) signed a memorandum of agreement with Plan International, Inc. Philippines on Monday, Nov. 23, for the provision of a 1-unit mobile training facility (14-footer wing van) that will serve as a mobile training laboratory in order to reach vulnerable communities, youth, and persons with disabilities in the region.

Plan International is a development and humanitarian organization that has been operating in the Philippines since 1961 that focuses on promoting children’s education, health, protection, and a high quality of life.

On the same day, MBHTE also inked a MOA with the Local Government Unit of Datu Abdullah Sangki Municipality (LGU-DAS) in Maguindanao for the latter’s donation of a 1-hectare lot for the construction of Maguindanao Provincial Training Center located at the town’s Brgy. Talisawa.

The signing of the agreements, both held at Alnor Convention Center in the city, aims to advance the promotion and expansion of Technical Vocational Education and Training (TVET) at the community level of the Bangsamoro region.

Minister Iqbal said that currently, MBHTE has only three TESDA Training Institutions in the region, one Regional Training Center in Brgy. Rebuken and the other two are provincial training centers which are located in Basilan and Lanao del Sur.

“Maguindanao, being the largest in BARMM in terms of population, does not have a provincial training center until this day. One of the reasons for this is the absence of a lot to house the training center,” Iqbal said in his speech.

“We would like to thank the honorable mayor Datu Pax Ali Mangudadatu for partnering with us and for his generous and noble act that will benefit not just his constituents in DAS municipality but the entire province of Maguindanao,” he added.

According to MBHTE, for the meantime, only the provinces of Sulu and Tawi-Tawi have no provincial training centers. Nevertheless, the LGUs of both island provinces have already committed to providing pieces of lands and the ministry is just waiting for the issuance of the deed of donations.

Furthermore, Mayor Mangudadatu expressed his utmost willingness to donate more portions of land to advance the services of the ministry.

“Along with our SANGKAD ka DAS Program, alam ko na matutulungan tayo ng ministry, the Municipality of Datu Abdullah Sangki is willing to donate 10 or even 20-hectares of land to MBHTE, in order for us to have a Bangsamoro University, Polytechnic College, or a State University,” Mangudadatu said.