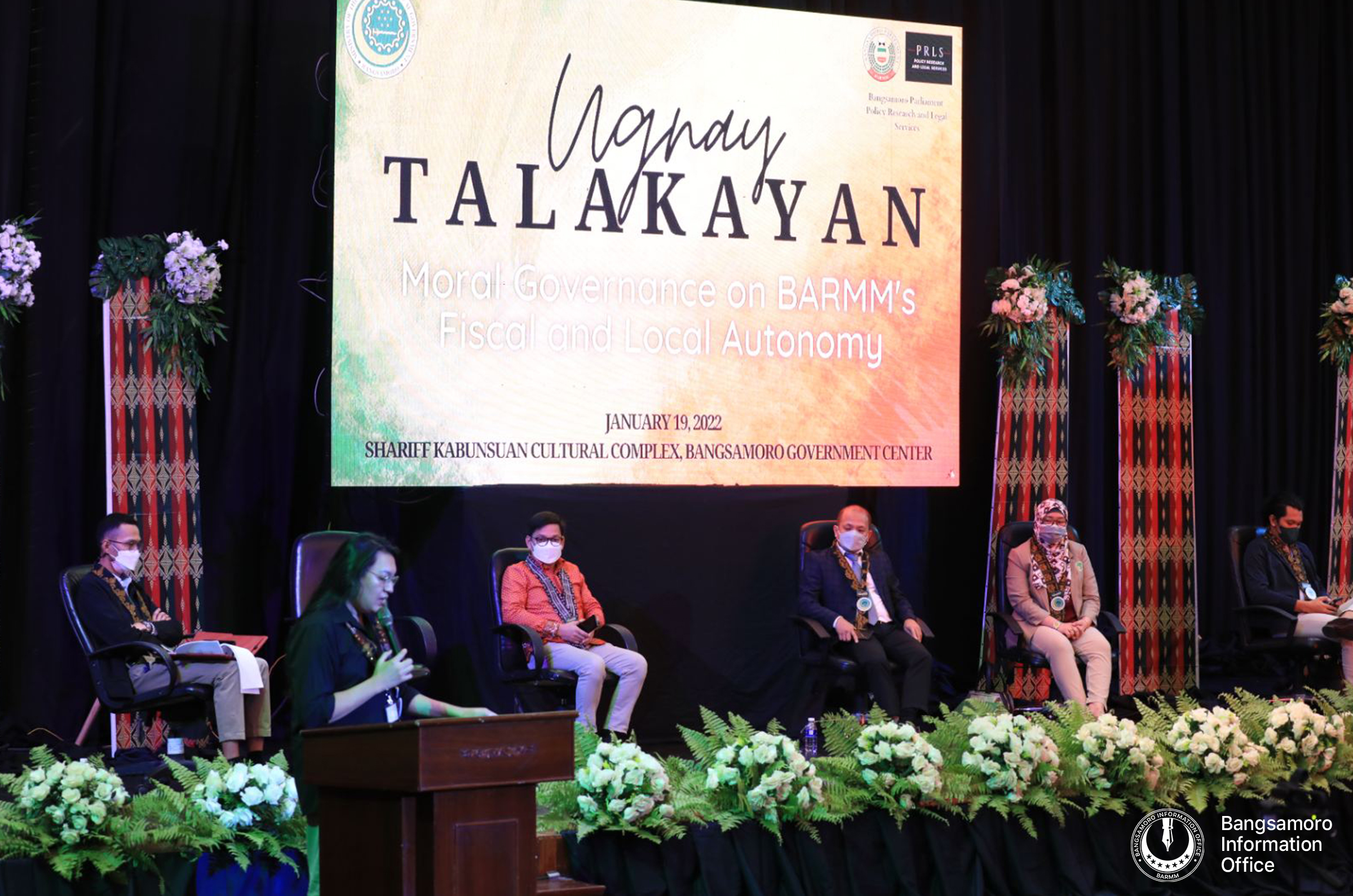 COTABATO CITY – Local government units (LGUs), regional authorities, and development partners of the Bangsamoro Government gathered Wednesday, Jan. 19, in an activity dubbed ‘Governance Day’ to have a discourse on the emerging trends in local governance.

Organized by the Ministry of Interior and Local Government (MILG) in this city, the event highlighted three activities such as the Ugnay Talakayan: Forum on Moral Governance and BARMM’s Fiscal Autonomy, Ugnay Kaalam: Expo Showcasing LGUs’ Innovative Practices, and the Pagkilala: Awarding Ceremony for the region’s performing LGUs.

Speaking to the participants, MILG Minister Atty. Naguib Sinarimbo emphasized that “dialogue to the experts is necessary so that everyone can help formulate a policy that benefits not just of the region but also of the local government units.”

On the Ugnay Talakayan discourse, Director II of the Bangsamoro Parliament’s Policy Research and Legal Services (PRLS) Nassef Adiong pointed the tenets of moral governance according to the distinct belief, culture, and aspirations of the Bangsamoro.

Meanwhile, Attorney General of the Bangsamoro Sha Elijah Dumama-Alba enlightened the audiences on the relevance of Intergovernmental Relations (IGR) between the National and Bangsamoro Government.

In her 30-minute lecture, Atty. Alba explored the etymology of IGR including its legal basis in the Bangsamoro Organic Law (BOL), its principles in the Bangsamoro Administrative Code, and some of the challenges that they have faced for the past three years since BARMM’s inception.

Alba explained IGR is “a term intended to designate an important body of activity or interaction occurring between government units of all types of and levels within a government system.”

Lack of critical appreciation of IGR is one of the challenges that they faced within the three-year transition period which she thinks can be resolved by cascading it properly and involved everyone.

Casil said that one of the main problems in the ruling in national perspective is that “it lacks clarity in terms of implementation”, while Atty. Biruar explored some legal issues pertaining to the law.

Garcia-Mandanas ruling pertains to Executive Order No. 138, s. 2021 which detailed the full devolution of certain functions of the national government to LGUs.

On the Ugnay Kaalam: Expo Showcasing LGUs’ Innovative Practices, a number of LGUs put up their booth at the Shariff Kabunsuan Cultural Complex lobby to showcase their products and services.

One of the exhibitors was the LGU of Paglat, represented by their Municipal Disaster and Risk Reduction Management Officer (MDRRMO) Bainot Kalanganan. LGU Paglat showcased their project dubbed “Community Leaders and Military Police Advisory Council” or CLAMP-AC.

Kalanganan, who is also the program officer of Local Government Units Grant Assistance for Innovative Practices (LGAIP), explained that the project started in the height of Marawi siege where there was massive recruitment of youth to join terrorisms.

“What we did in our locality is we prevented it by formulating a council that will counter violent extremism, including (use of) illegal drugs,” she added.

Also held during the event was the awarding ceremony for high performing BARMM LGUs, including the