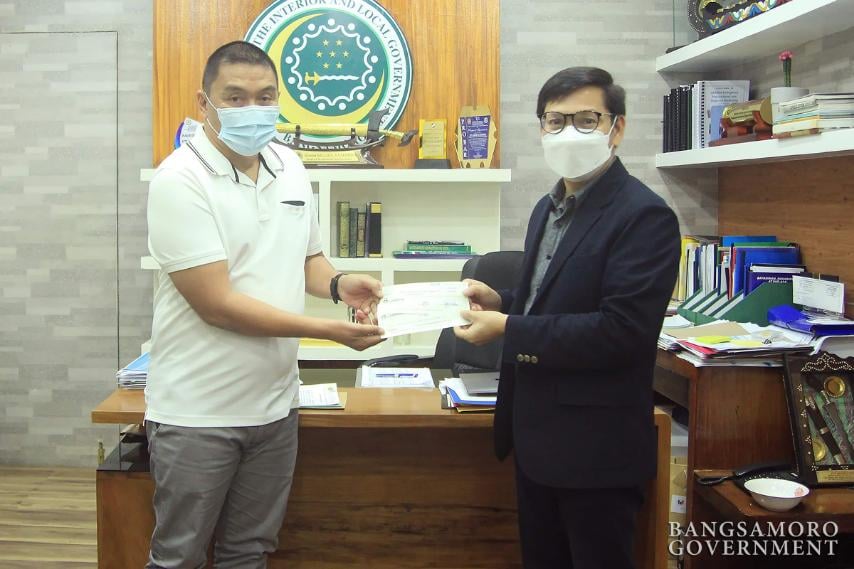 The check was worth 12.5 million pesos representing 50% of project’s total budget amounting to Php25-million.

The remaining 50% budget will be given upon the 80% physical completion of the project.

The project, subsidized under MILG’s regular funds and contingency fund provided by the Office of the Chief Minister, aims to enhance local government units’ service delivery for their constituents.

Earlier on January 18, Sinarimbo and Chief Minister Ahod Ebrahim signed a memorandum of agreement with the town mayors of Talayan, Kabuntalan, South Upi, Datu Blah Sinsuat, and Sultan Kudarat for the constructions of their respective two-storey municipal halls.

A similar agreement was inked in December 2020 between the MILG and the towns of Sultan Dumalondong, Butig, Poona Bayabao, and Lumbaca Unayan in Lanao del Sur, and Pandag in Maguindanao for the construction of similar two-storey buildings.

Minister Sinarimbo emphasized that the establishment of town halls across the Bangsamoro region will strengthen the LGU’s reach on the communities at the grassroots.

“We have given the contractors 330 days to complete the construction of the buildings,” he added.

The minister further stressed that a project management team was assigned in the different areas to monitor and ensure that the construction follows the project standards.

MILG is set to conduct tomorrow, April 29, the ground breaking for the two-storey municipal hall in South Upi, Maguindanao.