Rido settlements, a key to progress and development – MPOS 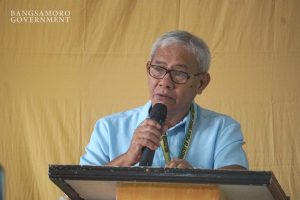 Minister Hussein Muñoz of the Ministry of Public Order and Safety (MPOS) said it is crucial to involve the public in discussions and consultations on “how we can maintain peace and order, and resolve rido which contributed to violence, displacement and untold sufferings our people.”

Cotabato City (June 8, 2020) – As part of its efforts to prevent and settle family feuds or “rido” in the region, the Bangsamoro Government’s Ministry of Public Order and Safety (MPOS) is holding a series of consultative assembly on conflict resolution all over the region’s five provinces.

The first leg of the activity was conducted in the city on June 8-9 for the participants of Maguindanao Cluster I. Participants include experts, influential leaders, and members of various organizations whose efforts are related to prevention and settlement of rido.

“Beyond work on governance, we need to focus on resolving rido since the unrest and unstable peace situation in our region hinders our economic development,” MPOS Minister Hussein Muñoz said.

During the assembly, the participants took part in workshops on resolving rido and conflicts, such as: conflict tree analysis on the causes and effects of rido; identification of best practices, compromise gaps and challenges in mediating conflicts; and formulations on workable solutions and recommendations.

He said is it crucial to involve the public in discussions and consultations on “how we can maintain peace and order, and resolve rido which contributed to violence, displacement and untold sufferings our people.”

“Rido greatly affects the peace and order, as well as the progress of our place. While major skirmishes are not common anymore, clan war is still prevalent in some parts of the BARMM. There is a need to settle these rido if we want development and progress takes its course in our region,” Muñoz emphasized.

A similar activity will also be conducted in the areas of Maguindanao Cluster II on June 10-11 and Lanao del Sur on June 15-16. The schedule intended for the island provinces of Sulu, Basilan and Tawi-Tawi will be finalized as soon as travel restrictions in the area are lifted.

The outputs of activity will be consolidated and will form part of the MPOS’ general strategy in settling Rido in the region.

“This is a prelude to a long term and methodical framework on settlement, reconciliation and unification efforts in the BARMM. The success of this activity will lay the solid foundation of our collective efforts to maintain peace and reconcile those involved in rido,” Muñoz said. (Bureau of Public Information)