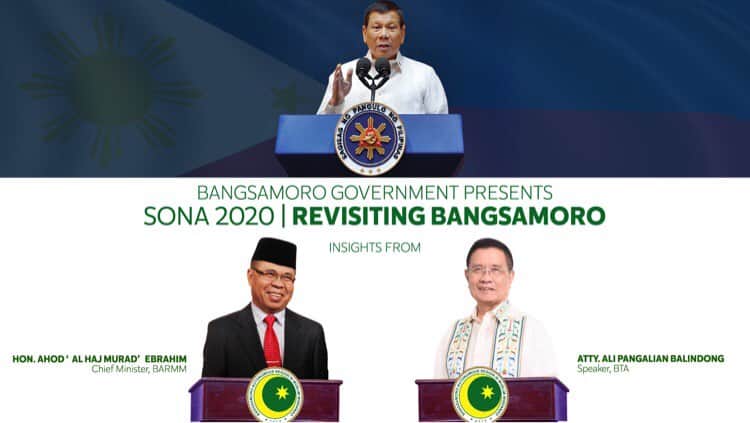 Ebrahim stated during the “SONA 2020: Revisiting Bangsamoro” held on Monday, July 27, that the establishment of the Bangsamoro Autonomous Region in Muslim Mindanao (BARMM) will remain as one of President Duterte’s significant legacy.

Since the inauguration of the BARMM in March 2019, it has established its call for “moral governance” and has created programs like the Project Tulong Alay sa Bangsamorong Nangangailangan (TABANG), Ayudang Medikal Mula sa Bangsamoro (AMBAG) Program, and Bangsamoro Job Portal, among others, for the benefit of its constituents.

“We pray that the Bangsamoro Autonomous Region will continue to succeed for the benefit of the people,” Ebrahim stated.

Meanwhile, the Bangsamoro Administrative Code, Local Government Code, and the Civil Service Code were introduced during the July 2020 BTA parliament sessions, and are currently on the committee level being deliberated by the Committee on Rules.

“The laws that we have enacted are consistent with the national laws,” Balindong noted. “There are other legislations that we’ve lined up and hopefully, this will be done within the year, including the six priority legislations stated in the Bangsamoro Organic Law.”

On March 23, 2020, BARMM turned one year. Due to the emergence of Coronavirus Disease (Covid-19), the Bangsamoro Government commemorated its first anniversary through public service delivery, instead.

As of today, there are 448 recorded Covid-confirmed cases with 9 fatalities. Despite this, the regional government continues to accept the arrival of Locally Stranded Individuals (LSIs) and Returning Overseas Workers (ROF) through Duterte’s Hatid Probinsya Program.

“These are the challenges that we continue to address, because they are our people and we need to serve them for their benefit. The BARMM government will continue to supply the needs to fight the pandemic,” Ebrahim stated. (Bureau of Public Information)