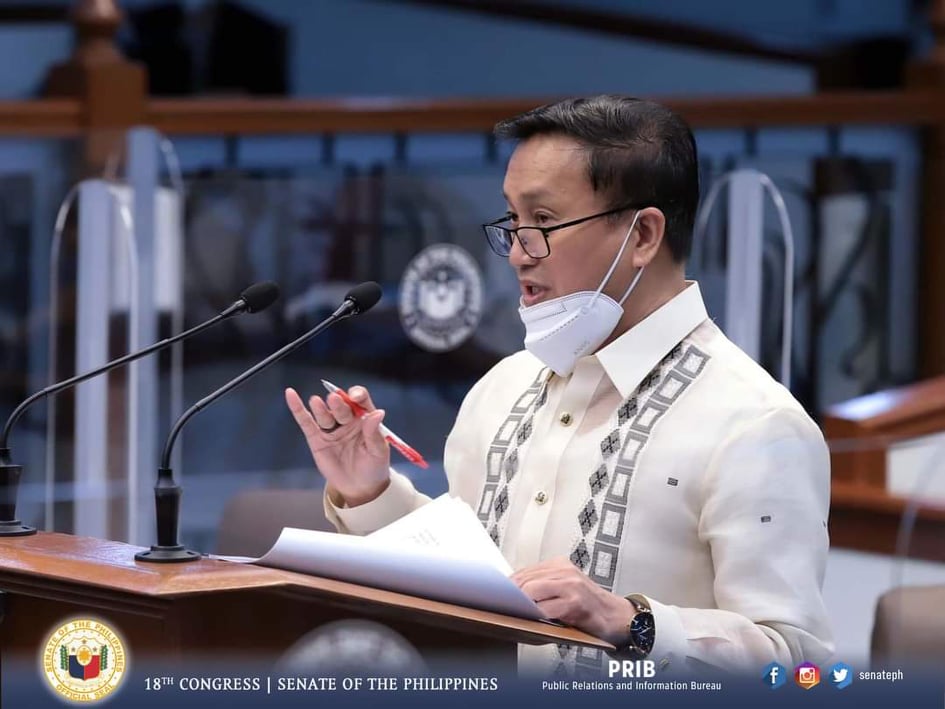 Senator Francis Tolentino defends Senate Bill (SB) No. 2214 and reiterates “no need to hold a plebiscite” to amend Sec. 13, Article XVI of the Bangsamoro Organic Law during the 7th plenary session on Aug. 24, 2021. (Photo courtesy of Alberto Calvelo/Senate PRIB)

COTABATO CITY—Senator Francis Tolentino presented and incorporated some legal opinions and resolutions amid interpellation with Senator Panfilo Lacson regarding Senate Bill (SB) No. 2214 on Tuesday.

SB No. 2214 is a measure that appeals to extend the term of the Bangsamoro Transition Authority (BTA), thereby moving BARMM’s first regional parliamentary elections from May 2022 to 2025.

Senator Lacson, during the interpellation, pointed out that if the said election is going to be postponed, then “it is proper for that Bangsamoro people to be also consulted by way of a plebiscite.”

Accordingly, he said the people of BARMM already ratified the Bangsamoro Organic Law and that election would be held on May 9, 2022.

“Part of the ratification that they voted on, Mr. President, is that election should be held next year. And since we are postponing the election three years from now, wouldn’t be unconstitutional if we don’t consult in a plebiscite the people who ratified originally the BOL?” said Lacson.

On the other hand, Tolentino said that “there is [only] a need for a plebiscite if it [situation] constitutionally affects the structure of the Bangsamoro.”

“Theoretically Mr. President, that [plebiscite] should be done, but we likewise consider the plenary powers of the congress to amend existing laws that would not transgress the constitution,” Tolentino, who is also the chairman of the Committee on Local Government, stressed.

Tolentino also read some letters and resolutions and incorporated them in the journal of Tuesday’s proceedings, as follows:

• On March 17, 2021, a legal opinion coming from the Commission on Elections (COMELEC) stated that there is no need to have a plebiscite because “there is no similar provision in the 1987 constitution which would require another plebiscite for an effective amendment of the organic act, particularly the date of elections.”

• On June 25, 2021, the Department of Justice Opinion stated: “We, while we agree with the petitioner’s underlying premise that sovereignty ultimately resides in the people, we disagree that this legal reality necessitates compliance for plebiscite requirement for amendments to RA 9054.”

• On June 29, 2021, a letter from COMELEC Executive Director Atty. Bartolome J. Sinocruz addressed that enacting the Bangsamoro Electoral Code (BEC) and other codes such as Bangsamoro Local Government Code (BLGC) is crucial as they shall provide substantive elements for the conduct of the BARMM elections.

• On August 11, 2021, through a COMELEC Resolution No. 10713 promulgated by the Commission and Elections En Banc, it states that the allocation of elective positions for the BARMM parliamentary elections cannot yet be determined at this point. The reasons were due to the unavailability of the a) Bangsamoro Electoral Code; b) apportionment of the BARMM into parliamentary districts; c) manner of election and reserve of electoral seats, and d) treatment of the 63 barangays in North Cotabato for that election.

Further, Tolentino expressed that the filing of candidacy is within 37 days, which would be insufficient for the BTA to pass the electoral code and craft a fair and equitable redistricting of the entire BARMM area. (Bangsamoro Information Office)