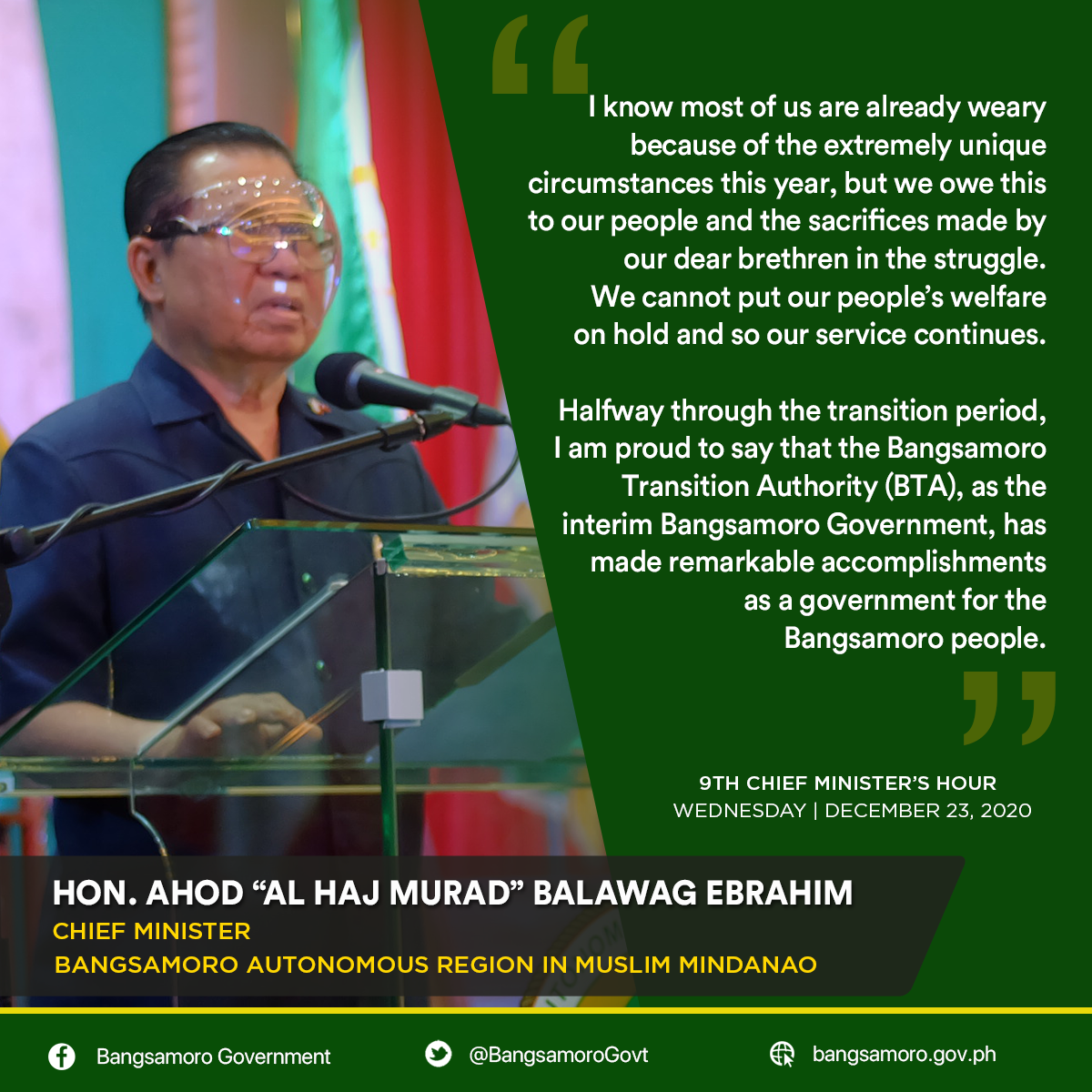 One year and nine months ago, we convened inside this very hall to set a course towards the future. We swore our moral oath and promised to redefine the future of the Bangsamoro.

We began building the foundation of moral governance.

We were, of course, in anticipation that the transition period will be filled with birth pains, anxiety and uncertainties. By this time, we can already attest that those expectations were dramatically met with the addition of an unprecedented global crisis that would impact all walks of life – including the lives of our people.

I know most of us are already weary because of the extremely unique circumstances this year, but we owe this to our people and the sacrifices made by our dear brethren in the struggle. We cannot put our people’s welfare on hold and so our service continues.

On the other hand, the Intergovernmental Relations Body (IGRB), co-chaired by Sec. Carlos G. Dominguez for the National Government and Min. Mohagher M. Iqbal for the Bangsamoro Government, is a partnership worthy of commendation. Since its first consultative meeting in December 2019, the IGRB has met five times.

While the IGRB exerts maximum efforts to cooperate and coordinate, as well as resolve issues in a non-adversarial manner, the complexity of issues and the processes to be observed understandably pose constraints in timely moving forward.

The following are the issues still being discussed in the IGRB:

The BTA also admittedly still has numerous tasks to complete through the transition period, which by law, is set to end in June 2022. To name a few:

The challenges that the BTA now face in carefully navigating the transition period are daunting. The transitional environment sets some limitations in instituting changes and reforms in the BARMM, such as:

As of the moment there is slow progress in the implementation of the components of Normalization for the following reasons:

It is along these exhaustive list and reasons where the recommendations to extend the transition period until 2025 are rooted. As initially proposed by the various civil society organizations who continue to be our critical partners for peace and development in the Bangsamoro, the extension is necessary so that the BTA is afforded sufficient time within which to satisfactorily accomplish its tasks and commitments under the Bangsamoro Organic Law and for the National Government to deliver the pending programs under the normalization process.

Mr. Speaker, esteemed colleagues, we are all aware that for the past few weeks, the conversation in the Bangsamoro circled around the call for extending the transition period. Allow me to take this opportunity to share important updates towards this end.

On November 23, 2020, I together with some members of the Cabinet met with President Rodrigo Roa Duterte in Davao City to update the President about the progress of our work here in the BTA, the challenges we face, and opportunities we see as we fulfill our mandate entrusted to us. We also took this opportunity to relate pertinent issues on the normalization process as I have mentioned earlier. The idea is to discuss ways forward that would ensure the success of not only the BTA or the transition period but also of the Bangsamoro Peace Process.

As a true son of Mindanao and to some extent, a Bangsamoro himself, President Duterte acknowledges that the transition period is too short to begin with and he understands the profound reasons behind the call for extending the transition period. Needless to say, however, this would entail amendments to RA 11054 and as such, an act of Congress is imperative.

Shortly after the meeting with the President, we met with Sen Zubiri, the champion of the BOL in the senate, to have essentially the same conversation and hopefully to start the legislative process in the upper house. As expected, the good majority floor leader was also very supportive of the bill extending the transition period. He even initially promised to sponsor this important legislation.

Two weeks ago, the team met with the leadership of the House of Representatives. Speaker Lord Allan Velasco, Majority Floor Leader Martin Romualdez, and Minority Floor Leader Joseph Stephen Paduano all expressed their support and as a testament to this, the House already created a joint committee to deliberate this important legislation.

As we speak, there are now four House Bills filed in the lower house – HB 8116 by Rep. Loren Legarda, HB 8117 by Rep. Toto Mangudadatu, HB 8161 by Majority Floor Leader Romualdez, and HB 8222 by Rep. Khalid Dimaporo. Several representatives have likewise co-authored the bills and we are expecting that many more will do the same.

Mr. Speaker and dear colleagues, we also had separate meetings with Senate President Tito Sotto and Senators Tolentino, Pimentel, Zubiri, Angara, and Poe. The discussions were very fruitful and many expressed intents to be co-authors once the equivalent bill is sponsored in the Senate upon its resumption next year.

We are aware that there are concerns from some local chief executives. We respect and heard their opinions, after all this is part of our democracy. In keeping with our call for moral governance, there is a continuing engagement with them and with other key stakeholders to address their concerns and promote mutual understanding and cooperation. Our initial engagements showed promising results and I am confident that together, we will be able to move as one for the sake of the Bangsamoro.

With several bills filed in Congress and the unwavering support of His Excellency President Rodrigo Road Duterte and his Cabinet, we are optimistic that we can push through this important goal.

But for everyone in the Bangsamoro who believes in lasting peace and development.

My dear brothers and sisters, I thank you for joining us in this dream and for tirelessly representing our people and their hopes. We have come along way, but the road is still a long way to go. We cannot and we must not stop until we build a government reflective of our sacrifices, history, and a proud future for those who will follow, In shaa Allah.

Thank you so much and Wassalam.

Chief Minister Ahod B. Ebrahim’s Message on the 7th Year Anniversary of the Signing of the Comprehensive Agreement on the Bangsamoro
March 27, 2021