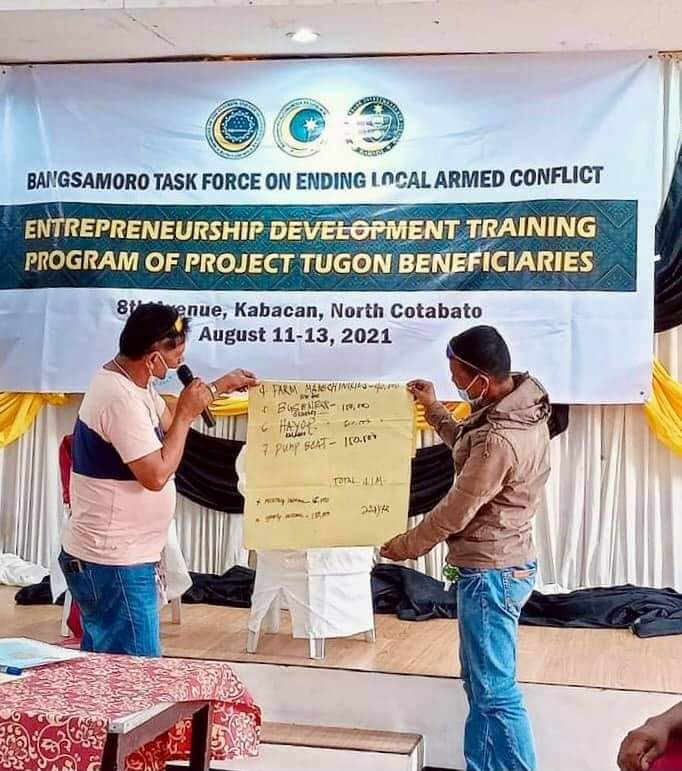 The trainings, which were conducted on Aug. 3-5 and Aug. 11-13 held simultaneously at Radjah Buayan, Maguindanao; President Quirino, Sultan Kudarat; and Kabacan, North Cotabato, respectively, was in collaboration with the Ministry of Trade, Investments and Tourism (MTIT).

From the assistance coming from 33rd IB, 601st BDE and 602nd BDE of the Philippine Army, the entrepreneurship development training was part of the assistance of Project TuGoN purposely to capacitate former combatants on starting up business, financial literacy, business resiliency, and other important areas of entrepreneurship.

These are in preparation for their reintegration into mainstream society and become more productive Bangsamoro citizens.

Project TuGoN also plans to do the same activity in the provinces of Lanao Del Sur, Basilan, Sulu, and Tawi-Tawi to cater former combatants to avail of the skills trainings that could help them in reshaping their lives.

The Bangsamoro Government will continues its drive to end local armed conflict and encourages other lawless groups to re-integrate to the mainstream, society, and avail themselves of the Project TuGoN program and services, and other government assistances which provide skills trainings, basic services, benefits, and support to the former rebels. (Bangsamoro Information Office)