Bangsamoro is founded on blood, sweat and tears of mujahideens — Ebrahim 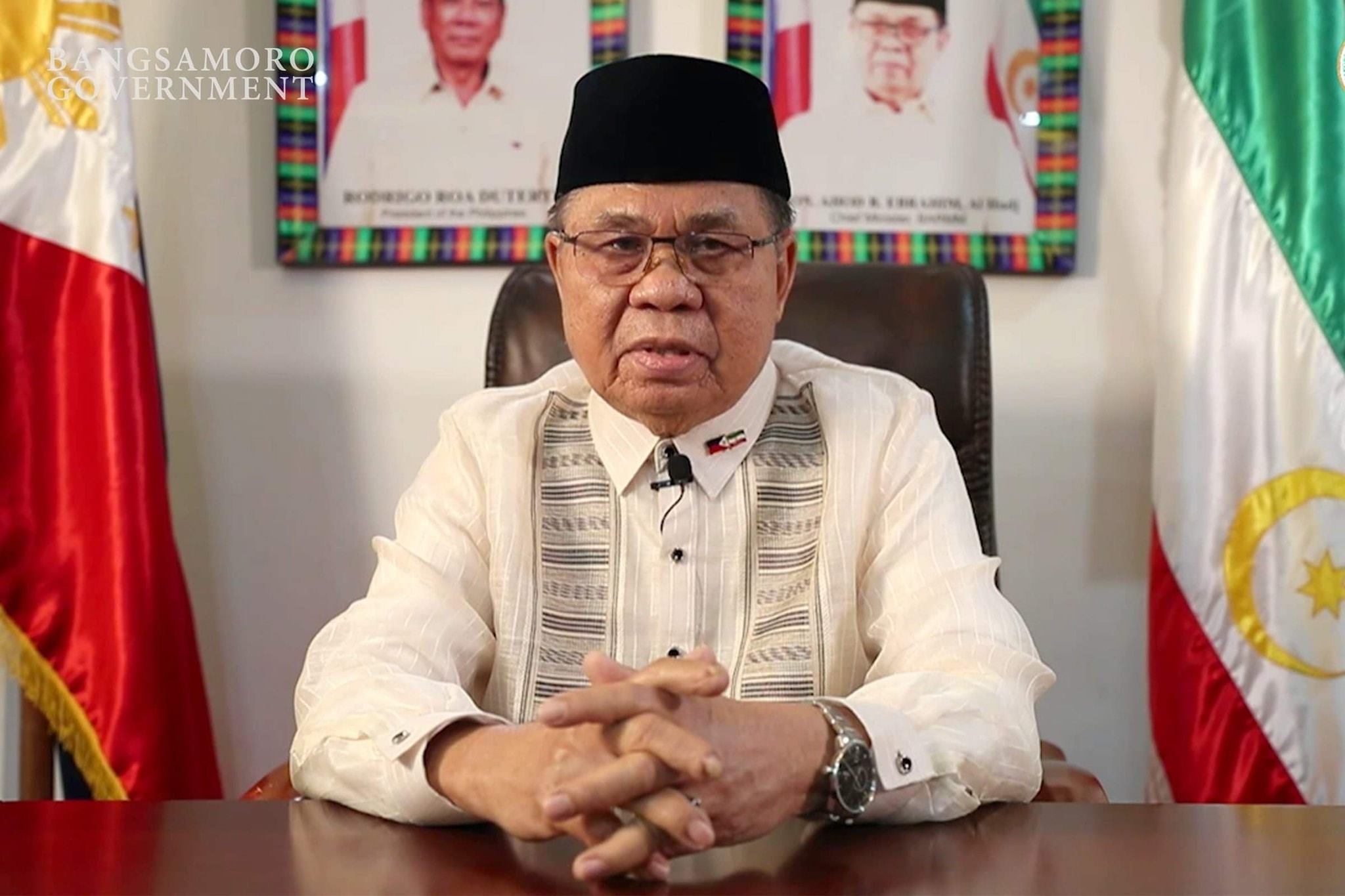 COTABATO CITY—Chief Minister Ahod Balawag Ebrahim emphasized during his Report to the Bangsamoro Thursday, Jan. 21, that the autonomous regional government is “not an end, but a continuation of our [Bangsamoro] struggle.”

The establishment of the Bangsamoro Autonomous Region in Muslim Mindanao (BARMM), according to Ebrahim, is a product of the sacrifices and pains of the mujahedeens and communities for the sake of the struggle.

“It is important to constantly remind ourselves that what we achieved so far is founded on the blood, sweat, and tears of our brethren, our mujahedeens,” Ebrahim noted.

“Two years ago, the Bangsamoro people decided to ratify a legislation that will ultimately change the direction of their future and honor our struggle towards self-determination,” Ebrahim added.

Ebrahim also highlighted the gains of the interim government during the transition period and the challenges it faces.

The Organic Law for the BARMM, or the Republic Act 11054, enumerates the mandates of the Bangsamoro Transition Authority (BTA) that it needs to fulfill during the transition period.

Ebrahim said the Bangsamoro Transition Plan, which was approved on 17th of June, 2019, is the guiding document that lights the regional government’s path throughout the transition.

“We are proud that the transition plan reflects our shared direction as a new government,” Ebrahim said.

The administrative code thay was approved in October 2020 “defines the very structure, the relationships, and systems of our [BARMM] bureaucracy.”

“Proud, unique, and responsive – these are the simple words we can use to describe our approved regional structure,” Ebrahim said, noting that the Bangsamoro is a unique region and government—a Parliamentary bureaucracy under a unitary State.

Other priority codes are underway at their respective committees and cabinet level deliberations.

With the employees of the replaced Autonomous Region in Muslim Mindanao (ARMM) phased out and given their separation pay and benefits, Ebrahim said government services were not negatively affected. In late 2019, the BARMM launched the Bangsamoro Job Portal, an online platform for submission of applications to positions for both regional and provincial posts.

Government of the Day’s programs

Local government units in the region also posted higher number of awardees of Seal of Local Good Governance (SGLG) from the Department of the Interior and Local Government (DILG) central office. The region garnered a total of 28 SGLG awardees in 2019. Ebrahim said it made the BARMM “the number one region in Mindanao and fifth in the entire country.”

No BARMM local government unit functions without Internal Revenue Allotment (IRA), as notice of cash allotment was issued in February last year — “a promising development at the heartland of the Bangsamoro,” Ebrahim added.

Transparency in the infrastructure projects of the region has also manifested with the Expanded Bangsamoro Advanced Road Mapping and Management (E-BARMM) that uses geo-tagged photos for data validation.

“The core goals of the E-BARMM System are transparency and efficiency in project monitoring,” Ebrahim added.

The regional government also established programs “that have tangible outputs and can be felt immediately” by the constituents.

The Project ‘Tulong Alay sa Bangsamorong Nangangailangan’ (TABANG) was conceptualized and initiated in order to bring government services closer to the people. It reached 417,398 residents [and counting] across the region.

As of December, 2020, the ‘Ayudang Medikal Mula sa Bansgamoro Government (AMBAG)’ has assisted at least 9,219 patients through its 11 partner hospitals.

AMBAG seeks to expand its coverage by partnering additional hospitals within the region and outside the core territories.

Presently, the region has the lowest positive and active cases of Coronavirus Disease (Covid-19) in the entire country. Isolation facilities throughout the region were also constructed in order to mitigate the spread the virus.

An initial budget was also earmarked by the region for the procurement of vaccines worth 500 million. “Preliminary engagements with key companies have already started and we will work hard to get the needed vaccine as soon as possible,” Ebrahim stressed.

Rallying the cause to affect desirable change in the constituents of the BARMM, Ebrahim stressed that the region is prioritizing programs which are accessible to the people.

“We shall continue to prioritize programs that have direct impact to the everyday lives of our people,” Ebrahim noted.

Ebrahim stressed that despite the achievement of the interim government in the past two years, it still has more things to fulfill, considering the challenges it faces in the time of pandemic and some other governmental and transition dynamics.

The transition period, Ebrahim noted, is the most important phase of a peace process and should not be taken for granted, especially for a revolutionary group that has struggled for decades.

“The Bangsamoro Transition Period is a crucial time, and we cannot afford to lose this opportunity for anything less than what we have envisioned in the Bangsamoro Organic Law,” he said. (Bangsamoro Information Office)