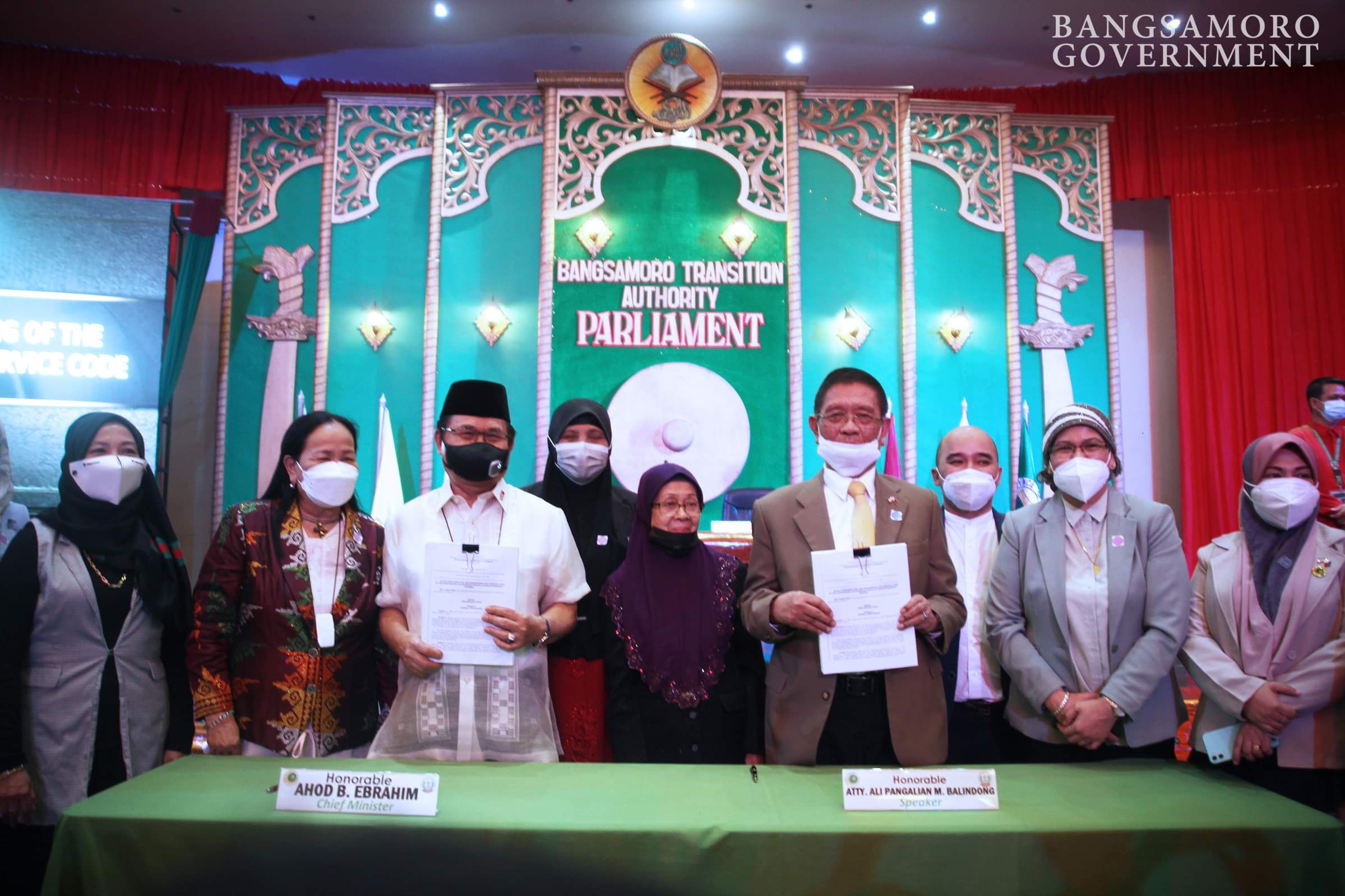 COTABATO CITY – The Bangsamoro Transition Authority (BTA) on Wednesday, Feb. 24, approved another one of its priority legislations – the Bangsamoro Civil Service Code (BCSC).

The code will govern the conduct of civil servants, prescribe qualifications for non-elective positions, adopt an independent and credible merit and fitness system, protect civil service eligibles in various government positions, including government-owned and controlled corporations with original charters in the Bangsamoro Autonomous Region, and provide rules on disciplinary authority over the Bangsamoro Government’s officials and employees.

By nominal voting, 67 BTA members voted both physically and via zoom for the approval of Cabinet Bill No. 59. None of the members voted against nor abstained.

Member of Parliament (MP) Engr. Aida Silongan filed the BCSC in the plenary on July 27 last year. She was the chair of the cabinet committee tasked to draft the bill.

It was approved with amendments at the committee level on January 26 and was reported back to the plenary on January 28.

MPs and proponents Deputy Majority Floor Leader Atty. Raisa Jajurie and Atty. Anna Tarhata Basman took the lead in defending the bill from other BTA members during the period of interpellation held on Feb. 16 – 17, as well as in the period of amendment on Feb. 23.

MP Jajurie said that under RA No. 11054 or the Bangsamoro Organic Law (BOL), the parliament is directed to enact a civil service law, provided that is shall be in accordance with existing national laws, such as the Omnibus Rules on Appointments and Other Human Resource Actions (ORAOHRA) and the Rules on Administrative Cases in the Civil Service (RACCS).

Special exams for IPs in BARMM

It is provided in the new civil service code that special examinations for Indigenous Peoples shall be requested by the Bangsamoro Government to be administered by appropriate government agencies.

“Ang ipinaglalaban ng provision na ito ay we want the examination giving bodies, like the Civil Service Commission, to conduct special exams to make that kind of eligibility, that require those examination, more reachable to our communities,” MP Basman said.

Article 16 of the BCSC states that this is in line with Bangsamoro Government’s policy to promote inclusivity for Moro and non-Moro indigenous peoples and accelerate the development of the areas occupied by them.

Article 120 of the code provides that passing the Shari’ah bar shall be considered as an eligibility appropriate for appointment to first and second level positions, provided that they are college degree holders at the time they took the bar.

This except positions covered by bar/ board/ special laws and/or those that require other special eligibilities as may be determined by the Civil Service Commission.

For the Shari’ah Bar passers who do not have college degrees when they took the bar examinations, the eligibility shall be for appointment to first level positions.

“This is based on the ORAOHRA provisions, and it emanates from Supreme Court decisions which has the power over the administration of the Shari’ah Bar,” Jajurie said.

In the case of the madaris teachers, the code provides that the Commission shall promulgate rules and regulations to set the standards for their qualifications, appointments, and promotions as provided in the Bangsamoro Education Code (BEC). Pending its enactment, the Commission shall base such rules and regulations on the recommendations of the Ministry of Basic, Higher and Technical Education (MBHTE).

MP Basman explained that the qualification standards for the madaris teachers will be defined in the BEC as it is the code that is devoted to the BARMM’s education system.

“We are envisioning a scenario where unique positions that are available to madaris teachers are going to be available in the Bangsamoro education system,” Basman said.

As a general rule in the Commission, third level positions are presidential appointees.

In the exercise of Bangsamoro Government’s autonomy, no career position in the BARMM is presidential appointee.

“Ang pinaka-basis nito is the facts on the ground,” Jajurie explained.

On the other hand, Basman emphasized that the absence of third level positions in the BARMM bureaucracy does not entail that individual public civil servants who possess such eligibility will lose their title.

“Not only did we accomplish yet another mandate as stipulated under the BOL, but we have also paved the way towards standardizing the regional bureaucracy that can truly manifest the shared aspirations of our people,” Ebrahim said.

He said the BCSC manifests Bangsamoro’s shared commitment towards a government “that adheres to meritocracy and placement of individuals with the passion to serve our people along with their qualifications in jobs that match their respective portfolio.”

Other priority codes on local government, education are already referred to their respective parliament committees, while the electoral and revenue codes are being finalized by the cabinet. (Bangsamoro Information Office)