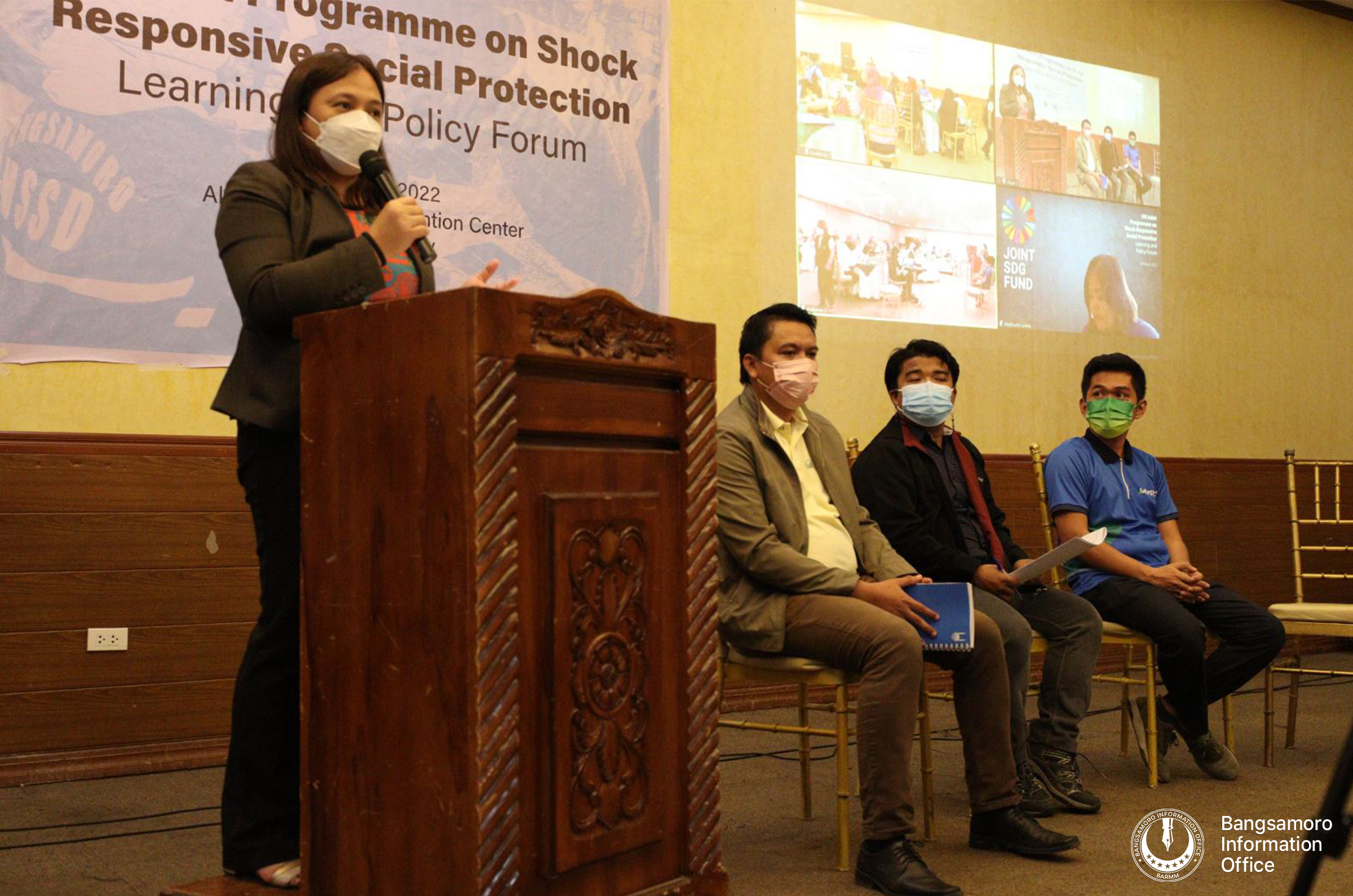 COTABATO CITY—The Bangsamoro Government, in partnership with the United Nations-Food and Agriculture Organization (FAO) of the Philippines and the United Nations Children’s Fund (UNICEF), conducted a learning and policy forum to address the vulnerabilities in BARMM last March 29, 2022.

The objectives of the study include identifying the vulnerability and risks, establishing profiles, and mapping out the identified vulnerable communities in Bangsamoro autonomous region.

BARMM officials who joined as a panel of reactors included Minister Atty. Raissa Jajurie of the Ministry of Social Services and Development (MSSD), Director Fatima Mending-Abas from the Ministry of Finance, Budget, and Management (MFBM), and Planning Officer III Ainie Batayo who represented Director-General Mohajirin Ali of the Bangsamoro Planning and Development Authority (BPDA).

Presented during the activity were three (3) policy papers entitled: Leaving No One Behind: Recommendations for Improving poverty and Vulnerability Targeting in BARMM, Results of Vulnerability and Risk Assessment Mapping (VRAM), and Investment Case on Risk-Informed Shock Responsive Social Protection (RISRSP) in BARMM.

The first presentation talked about poverty and vulnerability in BARMM. The policy brief discussed how having a poverty and disaster registry in BARMM can support the Bangsamoro Government in attaining inclusive development.

Through an empirical data gathered using the Proxy Means Test (PMT), it suggested that half of the (49.3%) of BARMM households are poor.

According to Minister Atty. Jajurie, the MSSD is implementing several social protection programs that have been designed “to reduce poverty and vulnerability by enhancing people’s income-generating capacities, diminishing people’s exposure to risks and enhancing their capacity to protect themselves against hazards, and interruption or loss of income.”

Meanwhile, the second policy VRAM was presented by Sheen Alexander Tato and John Mark Sarmiento from Voluntary Service Overseas (VSO) Philippines. The main output of this initiative was the development of an online dashboard to be accessible to the community which will essentially serve as a decision tool.

Panelist Mayfourth Luneta, executive director of Center, Disaster Preparedness Foundation, said that “the dashboard is a very useful for any region, especially in BARMM because they have a special risk, hazards-human-induced, and also natural hazards.”

“If you have baseline data from this (dashboard) then this would really help them in planning, so for me the dashboard is good,” she said.

Moreover, Ms. Katharina Bollig presented the result of RISPSP which seeks to further strengthen the regional social protection system and render it responsive to the frequent emergencies in the region – particularly conflict and natural disasters.

“When I speak about emergencies, I am referring to three types of emergencies—natural disasters, conflict, and health shock. And here, we’re looking at major health shock comparable to COVID 19 pandemic,” said Bollig.

Developed based on a combination of qualitative and quantitative data collection and analysis methods, the policy papers contained a comprehensive assessment and projection of the potential future impacts of shock responsive social protection. It also sheds light on the associated costs and ways to create the necessary fiscal space.

One of the salient points of the study presented was the effects of emergencies on BARMM constituents. On average, about a third of households are affected by an emergency each year with the majority being affected by natural disasters and conflicts.

Next to increased poverty, emergencies will also result in human capital losses in affected households due to foregone investments in health, education, and nutrition.

While the study presented various scenarios during and after emergencies, it also recognized that government interventions such as emergency cash transfers (ECT) can reduce post-emergency poverty rates, with poverty rate reductions ranging between 0.1 and 1.8 percentage points.

As the forum concluded, FAO Representative in the Philippines Kati Tanninen reminded everyone that in refining social protection initiatives, particularly by introducing anticipatory actions for hazards and disasters, a joint vision is “necessary to ensure that essential services are delivered timely to the neediest in order to protect lives and livelihoods before and immediately after a shock.”

“We hope that the learnings in today’s forum will serve as a catalyst to improve the way overall humanitarian response is implemented by strengthening the linkages between disaster risk management and social protection as well as anticipatory action, with emphasis on engaging all stakeholders”, Tanninen added.

Furthermore, BARMM Chief Minister Ahod Ebrahim said in his video message that “throughout this experience, we are grateful that we have the UN-BARMM Joint Programme on risk-informed shock-responsive social protection that helps the bureaucracy to help strengthen our community’s resiliency and find out how we can better the region’s state on livelihood, food security and nutrition.”

“I look forward to producing efforts that can truly be of help to our people,” said Ebrahim.

In August 2020, the United Nations and the Bangsamoro Government launched a partnership programme to build the resilience of BARMM households, particularly the poor and vulnerable, through social protection system that provides timely and effective responses to risks and shocks. (BIO)