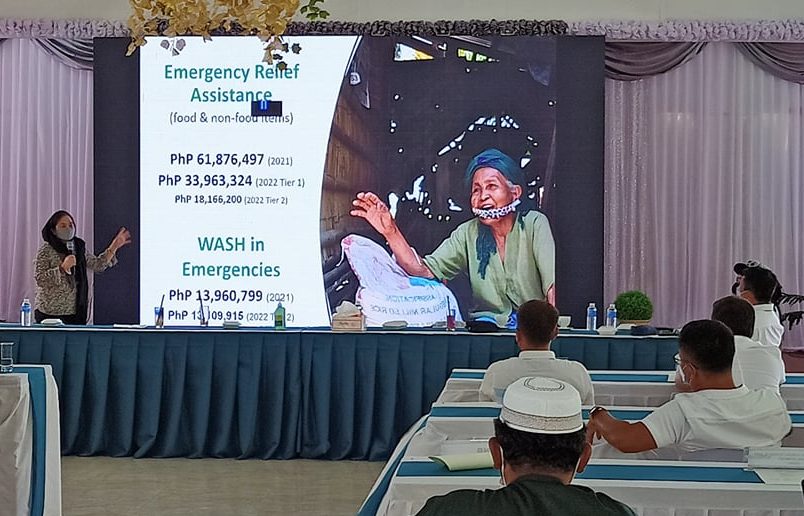 Social Services Minister Atty. Raissa Jajurie on Tuesday, July 13, presented to the local government units of Basilan province the programs and projects of the Bangsamoro Government for 2022. (Photo from MILG)

BASILAN – Bangsamoro Government’s Ministry of the Interior and Local Government (MILG) kicked off Tuesday, July 13, the first leg of the 2021 Bangsamoro Governance Pre-Summit for the local government units and heads of the various ministries in the province of Basilan.

This is in preparation for the upcoming 2021 Bangsamoro Governance Summit to be held on July 23 in Cotabato City. The summit’s main goal is to strengthen the supervisory authority of the Bangsamoro Government to its constituent LGUs and ensure alignment of the projects and programs of the LGUs to the development direction of the regional government.

Present Tuesday were Governor Jim Hataman Salliman, the city mayor of Lamitan and nine (9) municipal mayors of Basilan, together with the provincial heads of BARMM’s different ministries. Both parties presented their proposed regular projects and identified priority Project Program Activities (PPAs) for 2022.

The consolidated proposed projects and programs will be submitted and discussed during the Bangsamoro Governance Summit, to craft the Regional PPAs for 2022.

According to Jajurie, it would be better if the different BARMM ministries will have aligned projects with the LGUs to easily address the needs of the Bangsamoro People. “Ang ikinaganda ng pagakakaroon ng iisang layunin ng ibat-ibang ministries at LGUs ay nakakabuti sapagkat lahat ay makikinabang,” she said.

Meanwhile, according to Ra-Diyah Akmad, acting provincial director for MILG-Basilan, the presence of the representatives from the two BARMM ministries was proof that the Bangsamoro Government is always open to hear the concerns and voices of its people.

Basilan Vice Governor Yusop Alano also expressed his gratitude to the pre-summit’s participants and for the initiative of the regional government and LGUs to realign their projects and programs for the benefit of various sectors in the province.

“Base sa proposed programs, plans, and activities na ipinresenta, I always believed that BARMM is a vehicle to perform sustainable development in the region,” Alano said.