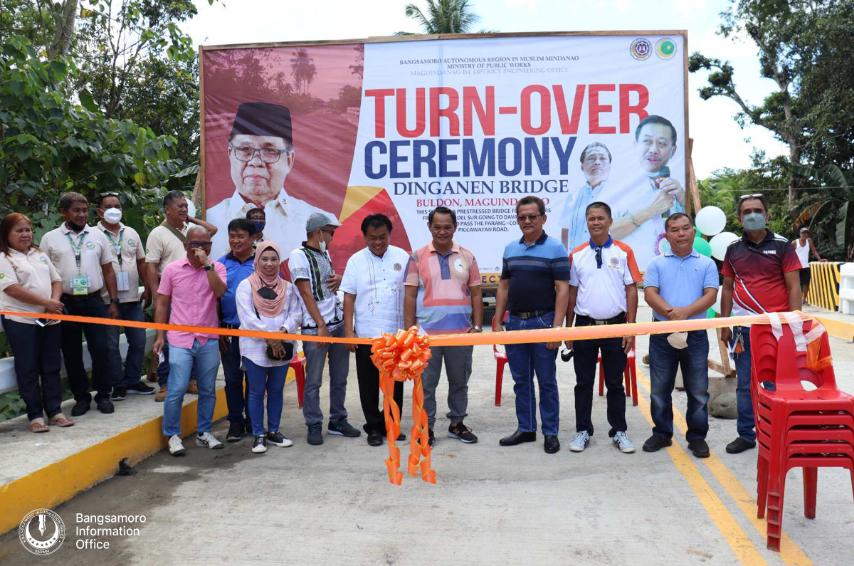 Worth P26-million, the 25-meter concrete bridge located at Barangay Dinganen in Buldon, Maguindanao is one of the vital projects of the Ministry of Public Works (MPW) funded through the General Appropriation Act (GAA) 2019.

Aside from its direct beneficiaries – locals who are mostly farmers, the bridge also provides an alternative route for travelers from neighboring regions.

“Completion of this bridge is seen to improve the socio-economic situation not just the Municipality of Buldon but including the neighboring municipalities. The bridge also provides travelers from BARMM, Region XII, and even Zamboanga Peninsula a shorter route,” said DG Ong.

Addressing the locals who attended the ceremony, DG Ong urged them to take care of the bridge as it is a by-product of the taxes they are paying to the government.

Meanwhile, Mayor Manalao shared that the bridge will not just spur economic activity but will also ensure safety of the travelers.

“Prior to the construction of this bridge, there have been numerous records of lost lives and properties in this river. There have been reported cases of drowned individuals and even vehicles trying to cross the river particularly when flooding,” said Manalao.

Hence, he was grateful to the regional government for the completion of the bridge.

“Thanks to the leadership of Chief Minister Ahod Ebrahim and MPW for this feat. This bridge is so vital as it will benefit not just the people of Buldon but its neighboring municipalities,” said Mayor Manalao.

District Engr. Abobakar, on the other hand, encouraged the residents to help them in the maintenance of the bridge.

“Construction was really challenging. Now that it has been completed, we encourage the residents to help us in the maintenance by coordinating to our office for maintenance work like unclogging,” said Abobakar. (Abdullah Matucan/BIO)