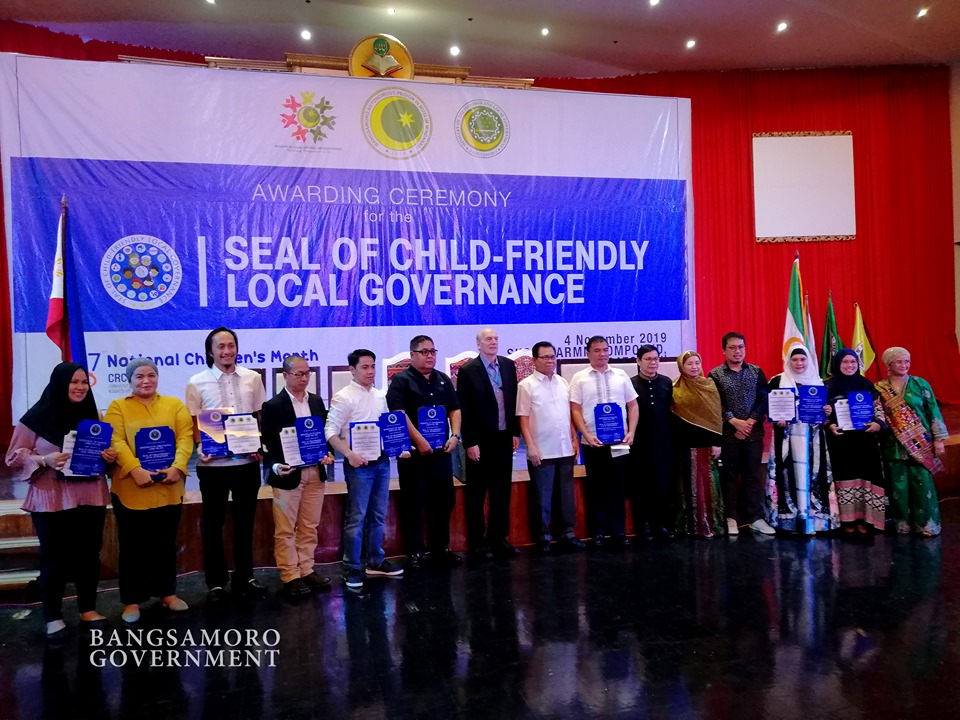 The Bangsamoro Autonomous Region in Muslim Mindanao (BARMM) stands firm on pushing for a more child-friendly government after 66 Local Government Units (LGU) were conferred the Seal of Child-Friendly Local Governance.

The awarding ceremony was held during the kickoff of the celebration of the 27th National Children’s Month on Monday, November 4, at the Shariff Kabunsuan Cultural Center in Cotabato City.

“If we are to assure a better future for this region and our people, we need to ensure that institutions of government ensure that the welfare of the children is at the forefront of development,” Ministry of Interior and Local Government Minister and BARMM spokesperson Naguib Sinarimbo said.

“The gradual improvements we are seeing now as well as in the years to come give us inspiration that, together, we can move to a new and greater height of development in the region,” he added.

The number of awardees in the region increased from last year’s five honorees of the mandatory Child-Friendly Local Governance Audit (CFLGA).

Bangsamoro Chief Minister Ahod “Al Haj Murad” Ebrahim said that “it is important that the Bangsamoro Government is in the same wavelength as that of the local government unit, especially during this transition phase. We need to translate all our efforts into a language that will ultimately benefit our people.”

“The Seal is a testament that the local governments in the Bangsamoro are doing their job in putting children a priority. The BARMM works with the LGUs in uplifting the welfare of our children and the lives of the Bangsamoro people,” Ministry of Social Services and Development Minister Raissa Jajurie said.

The SCFLG is a recognition system for LGUs nationwide being implemented by the Council for the Welfare of Children based on twelve criteria. It was launched on October 2014.

The month-long celebration is anchored on the theme: “Karapatang Pambata: Patuloy na Pahalagahan at Gampanan Tungo sa Magandang Kinabukasan.” The MSSD in collaboration with the MILG spearheaded the said month-long celebration pursuant to Republic Act 10661 or “An Act Declaring November of  Every Year as National’s Children’s Month.”

Furthermore, the Bangsamoro Government will lead the conduct of a series of events throughout November in celebration of the National Children’s Month.

These include visits to Early Childhood Care and Development (ECCD) Centers and Child Development Centers in the evacuation centers in Marawi City on November 12.

Other BARMM ministries will also take part in the month-long celebration through the following: the End Polio Campaign of the Ministry of Health and the Laro Tayo event of the Bangsamoro Regional Human Rights Commission, among others. (Bureau of Public Information)