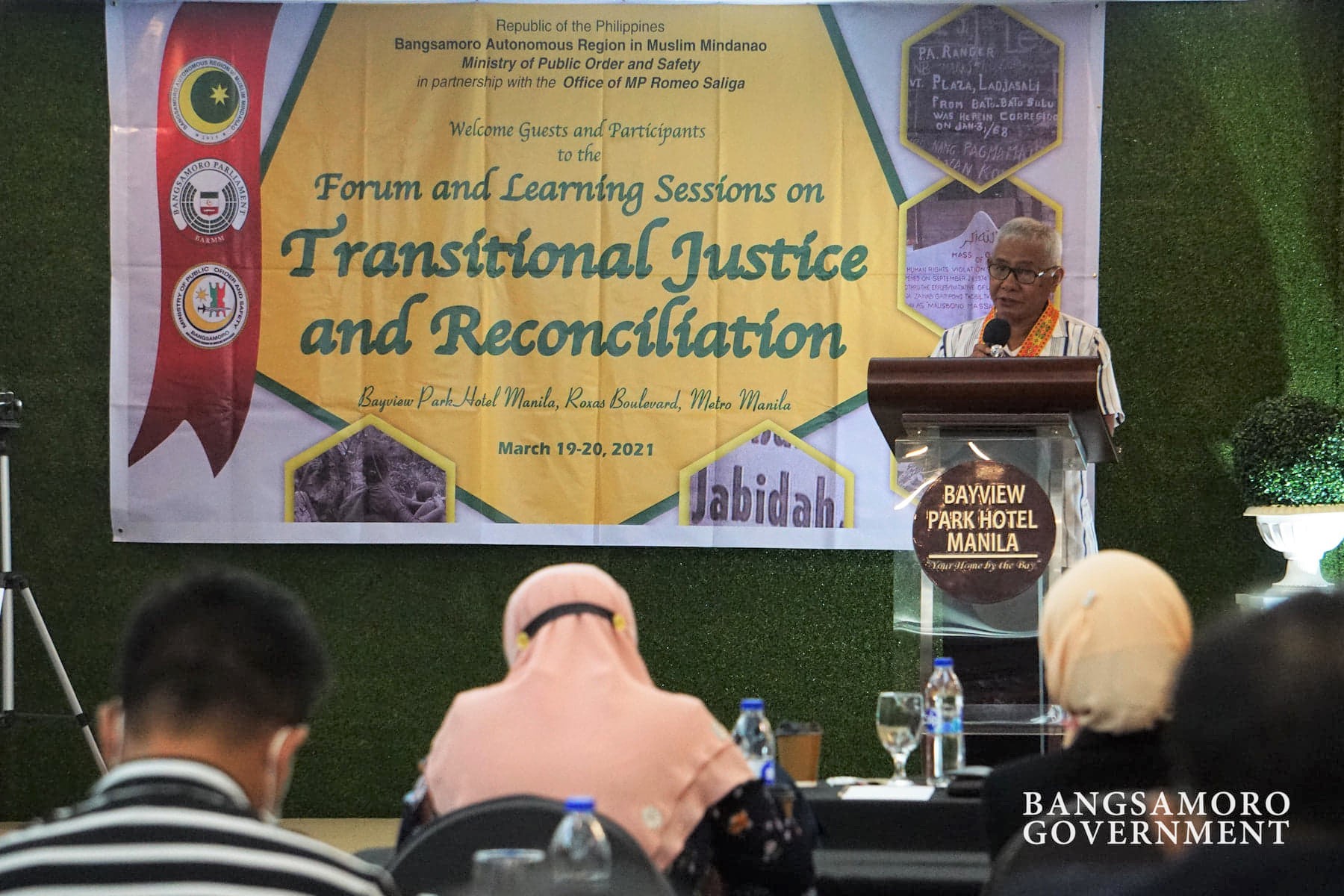 MPOS Minister Hussein P. Muñoz, during a forum on Transitional Justice and Reconciliation held at Bayview Park Hotel in Manila, said his ministry geared towards the formulation of policy framework on transitional justice mechanism in the Bangsamoro as part of its efforts in achieving a lasting peace in the region.

MANILA – Aimed at crafting policy recommendations for the establishment of transitional justice mechanism in the Bangsamoro, the Ministry of Public Order and Safety (MPOS) organized a two-day forum and learning session on Transitional Justice and Reconciliation with the sectors of indigenous people, youth, women, security, and religious.

The activity, held in this city on March 19-20, was also conducted in partnership with the office of Parliament Member Romeo C. Saliga.

“There is transitional justice because there were injustices committed against people – the horrible story of Jabidah Massacre, the massacres before and after it, and oppressions to people in the Bangsamoro and to the indigenous peoples,” said MPOS Minister Hussein P. Muñoz.

He said that the activity forms part of the endeavors of MPOS “to continue working for a lasting peace in the Bangsamoro in order to sustain the gains of the peace process.”

“If we feel that we have been wronged, we can expect that there shall be a transitional justice mechanism that would address the legitimate grievances of the Bangsamoro people and the IPs to correct historical injustices, and address human rights violations,” he said.

Among the discussions during the forum were the five pillars of transitional justice such as the Right to Know, Right to Justice, Right to Reparation, Guarantee of Non-recurrence, and Right to Memory; Recommendations of the Transitional Justice and Reconciliation Commission (TJRC); Bangsamoro’s experience on transitional justice; and National government’s interventions on TJR.

In a video message, Bangsamoro Chief Minister Ahod B. Ebrahim said it has been five years since the TJRC turned over its report on the historical justices, legitimate grievances, human rights violations, and marginalization through land dispossession in the Bangsamoro.

TJRC was created under the Normalization Annex of the Comprehensive Agreement of the Bangsamoro. It is mandated to “to undertake a study and to make recommendations with a view to promote healing and reconciliation of the different communities that have been affected by the conflict.”

“More has been done since then, but we have more work to do. Along with the need for normalization, we are in need of providing mechanism that can help transform war-torn communities towards productivity, development, and peaceful living,” CM Ebrahim said.

Article IX Section 1 of the Bangsamoro Organic Law (BOL) provides that the Bangsamoro Parliament, taking into account the report of the TJRC, shall enact a transitional justice mechanism to address the legitimate grievances of the Bangsamoro people, including the indigenous group.

The TJRC report recommended the creation of a National Transitional Justice and Reconciliation Commission for the Bangsamoro (NTJRCB).

Legislations on TJR for the Bangsamoro

During the forum’s second day, Senator Risa Hontiveros and Congresswoman Amihildia Sangcopan, who both attended via zoom, presented their pending congressional bills seeking to establish a TJR mechanism creating for the purpose the NTJRCB.

“In the context of the Bangsamoro, victims also have a right to seek redress for past abuse, and the state has an obligation to ensure accountability for wrongs committed,” said Hontiveros who authored Senate Bill No. 1913.

On the other hand, Sangcopan said House Bill No. 4003, which she filed with Congressman Jose Christopher “Kit” Belmonte, will “complete the implementation of the BOL.”

At the level of the Bangamoro Parliament, the Bangsamoro Transition Authority also adopted on January 24, 2020, Resolution 56 calling for the creation of the NTJRCB and the formulation and national implementation of a TJRC program for the Bangsamoro. (Bangsamoro Information Office)