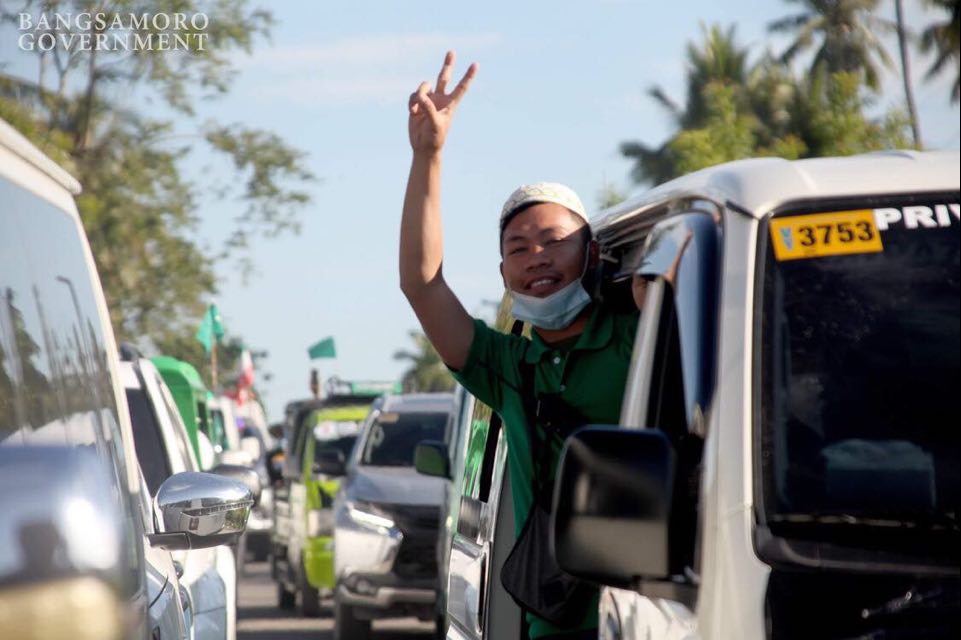 Yes for Peace. A supporter raised a peace hand sign while joining the Peace Caravan—a call for extending Bangsamoro Transition from 2022 to 2021–on Thursday, March 18, 2021.

COTABATO CITY—Around a hundred thousand supporters from Cotabato City, North Cotabato, and Maguindanao showed their support for the call to certify as urgent the bills, seeking to extend the Bangsamoro Transition from 2022 to 2025, through a Peace Caravan on Thursday, March 18.

Further, the CSOs drafted a statement of appeal, urging President Rodrigo Roa Duterte to prioritize the certification of the bills to extend the transition period in the region.

Different supporters—men, women, elders, students, farmers—lined up along the highway, while chanting “Allahu Akbar” (Allah is Great) and “yes to extension of Bangsamoro Transition“.

Bungalos Abpet, 49, married, a resident of Barangay Tenok, Mangudadatu in Maguindanao and Focal person of Bangsamoro Communication Network (BCN), expressed his full support to the extension of transition period.

[The great desire of the Bangsamoro is to extend the BTA for three years more, because we believe that it will bring peace—for our children; our youth; for the future of Bangsamoro.]

Furthermore, to ensure the safety of the Bangsamoro people, the Ministry of Health (MOH-BARMM) headed by Deputy Minister Dr. Zul Qarneyn Abas and staff, voluntarily joined the caravan and delivered their services. (Bangsamoro Information Office)