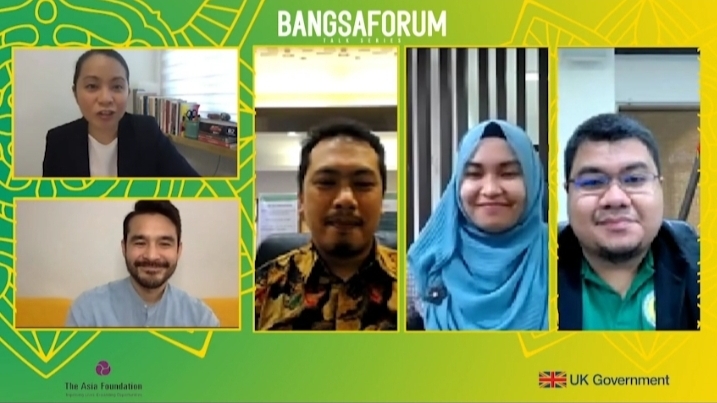 COTABATO CITY – To increase citizen participation in the discussions on Bangsamoro Government’s parliamentary form of governance, the Bangsamoro Youth Commission (BYC) and Bangsamoro Information Office (BIO) teamed up with The Asia Foundation (TAF), with the support of British Embassy in Manila, to hold an online forum dubbed ‘BangsaForum Talk Series’.

BARMM Cabinet Secretary Asnin Pendatun, and Members of Parliament (MP) Anna Tarhata Basman and Marjanie S. Mimbantas were the resource speakers during the forum’s first episode which aired during a watch party attended by media and youth organizations on Thursday, March 4 at the Bangsamoro Government Center in the city.

In the episode, moderated by broadcast journalists Atom Araullo of GMA-7 and Chiara Zambrano of ABS-CBN, the discussion revolved around the Bangsamoro peace process, the transition period, and the role of youth in Bangsamoro governance, to name a few.

“Sa parliament palang, hindi sila excluded. In the structure of our government, mayroon tayong ministry for non-Moro indigenous people,” she said, noting that there is also an office for settler communities.

“When there are policies that are being crafted, incorporated yung kanilang concerns. Kasama sila sa mga umuupo at nagdedesisyon for the greater region,” Basman added.

On the subject of whether BARMM is really the key to long lasting peace in Mindanao, CabSec Pendatun said that the establishment of the Bangsamoro Government is “probably the last best chance that we have as a peaceful attempt to address the struggles and aspirations of the Bangsamoro people.”

The BangsaForum Talk Series is a town hall initiative and BARMM information drive on the new parliamentary form of government and how it will shape the future of the region. It is part of a larger initiative led by TAF and funded by the British Embassy Manila with the ultimate objective of enhancing meaningful political participation in the region by creating inclusive and safe spaces for dialogue especially among the underrepresented groups such as the youth, women, and indigenous peoples. (Bangsamoro Information Office)