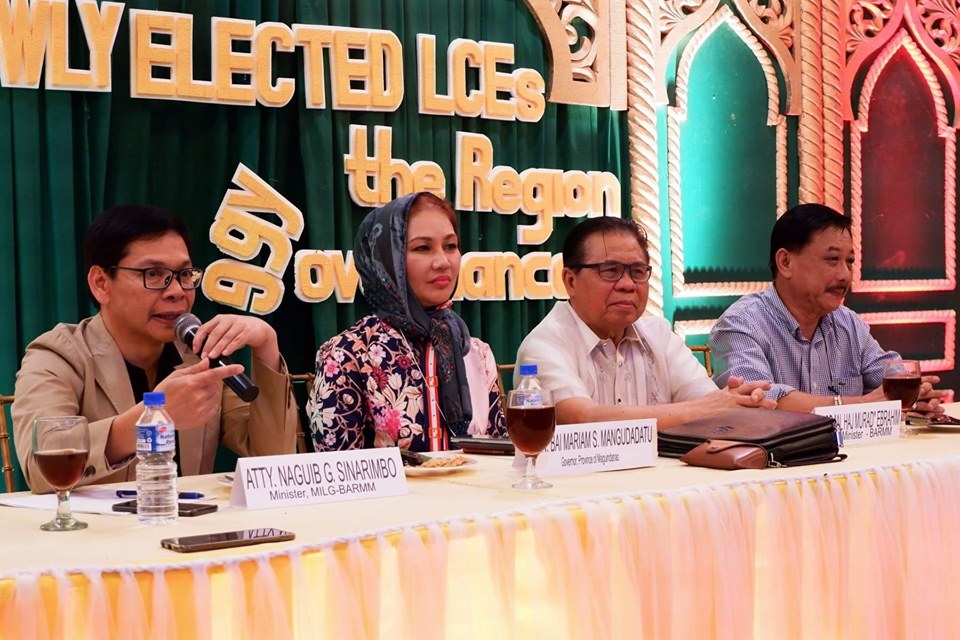 Cotabato City (June 16, 2019) – The Bangsamoro Autonomous Region in Muslim Mindanao’s Ministry of the Interior and Local Government (BARMM-MILG) has organized a two-day training with orientation for newly-elected Local Chief Executives (LCE) in the region.

The activity aims to train the new LCEs on the basics of local governance and administration. With the theme “Creating Synergy in the Bangsamoro Towards Moral Governance,” the activity will be conducted from June 16 to 17, 2019 in Cotabato City.

MILG Minister Atty. Naguib Sinarimbo said: “The purpose of this training is to orient the newly elected local chief executives of the basics of governance, what laws or ordinances they need to enact special bodies to organize, what steps to take before actually assuming the post on June 30, 2019.”

During the two-day training, the participants will receive inputs about the Islamic perspective on leadership and management, salient features of the Bangsamoro Organic Law on local governance, and deconstruction of the poverty incidence in the BARMM.

Sinarimbo said the training has been given more significance as the new autonomous Bangsamoro region has just been established, and its officials has just assumed their respective posts.

“Under the law, the term of the transition will last for three years, this coincides with your respective term of three years. What better way to start than to start together, create a vision together, and work together to achieve the vision for our people in the region,” he said.

Strengthening ties with the new LCEs

The training of the new Bangsamoro LCEs before they assume office is a first of its kind.

In the training, the LCEs will participate in a series of dialogues focusing on nutrition, education, revenue generation, child-friendly local governance, and peace and order in the region.

During the activity’s opening ceremony held Saturday, June 15, Interim Chief Minister Ahod AlHaj Murad Ebrahim stressed that having a discourse with the Local Government Units (LGUs) is very significant as they are the most important partners of the BARMM in achieving the aspirations of the Bangsamoro.

“It is very important that we have a talk like this, in order to understand everybody and in order to have one common line. This is only the first time but rest assured that we will be talking more in order to work out a very strong cooperation and partnership with the LGUs,” Ebrahim said.

Meanwhile, governor-elect of Maguindanao province Bai Mariam Mangudadatu said the activity is very historical as “this is the first time na nagsama ang mga newly elected officials as well as the officers of BARMM.”

“Kung titingnan natin pare-pareho tayong nasa transition. Ibig sabihin kinakailangan naming mag-usap from time to time,” she emphasized that communication is really the best way to bridge the gaps between the LCEs and the key officials of the Bangsamoro Government.

She also assured that the province of Maguindanao will cooperate with the mandates of the local government ministry.