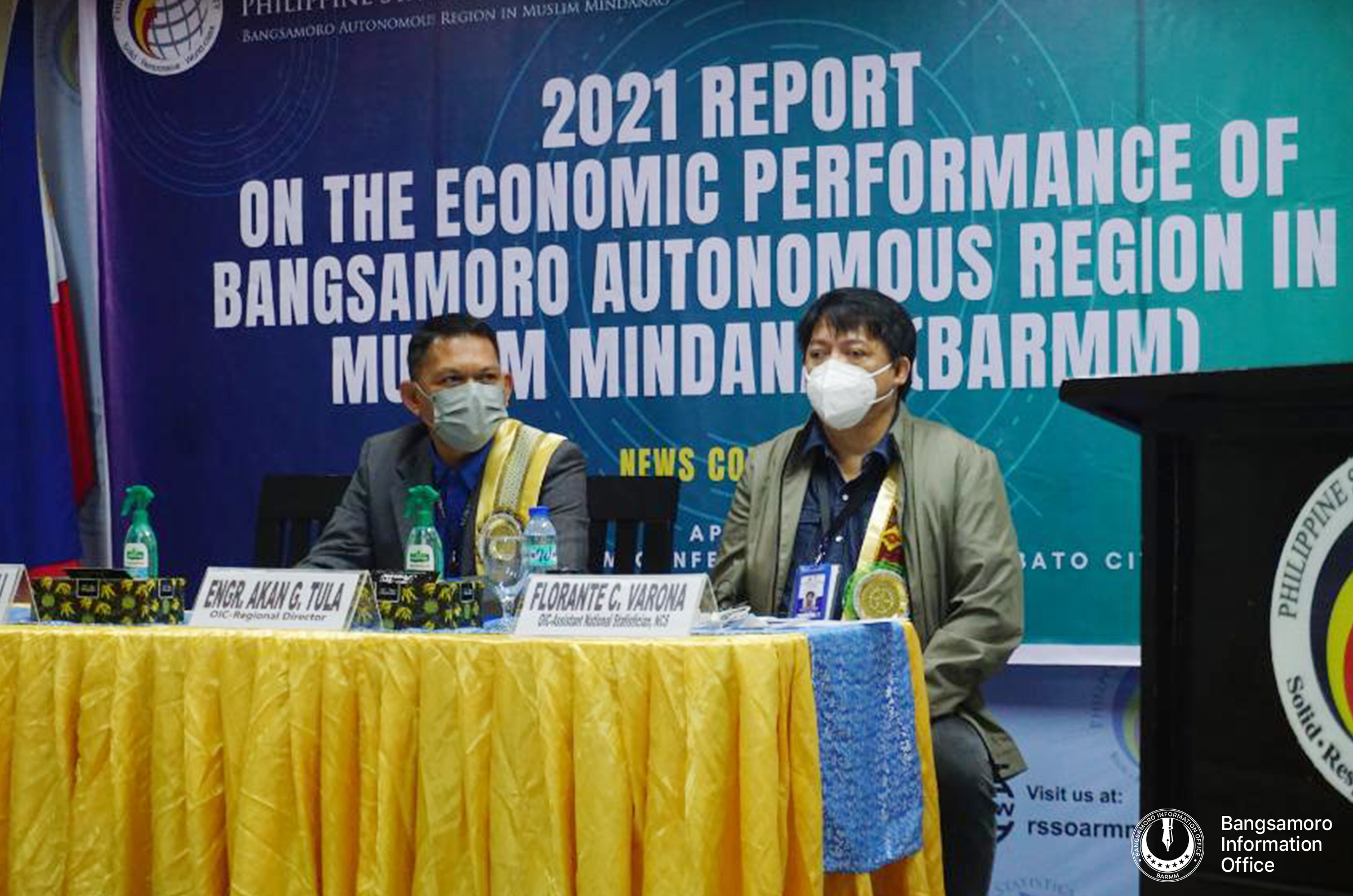 COTABATO CITY — Bangsamoro Autonomous Region in Muslim Mindanao’s (BARMM) economic performance  increased by 7.5 percent in 2021 and recorded the second-fastest growth among all regions in the country, the Philippine Statistics Authority (PSA) announced in a news conference Thursday, April 28.

Measurement of the economic performance of every region is based on Gross Regional Domestic Product (GRDP) — a tool to monitor the economic performance of a region covering the value of goods and services produced during the reference period, and Gross Regional Domestic Expenditure (GRDE) — the expenditure of residents of the region in the domestic territory plus their expenditures in other regions including the rest of the world.

PSA-BARMM Officer-in-Charge Engr. Akan Tula, who presented the result of BARMM’s economic performance, said the region had the second-fastest growth among all regions in the Philippines, between CALABARZON (7.6%) and CAR (7.5%), and was among the four regions in the country that surpassed the pre-pandemic per capita of GRDP and GRDE levels.

“With the 5.7 percent total GDP of the country, BARMM contributed 7.5 percentage points to the country’s economy in 2021,” Tula added.

PSA Undersecretary Claire Dennis Mapa, through Assistant National Statistician Florante Barona, explained that the goal of measuring GRDP and GRDE is to provide policy-makers and stakeholders with a comprehensive picture which is observed as an important tool for planning and policy formulation at the regional level.

“GRDP and GRDE are major economic indicators that will bring change in the lives of our countrymen through its impact – as it says, better data, better lives,” Mapa said.

BARMM Chief Minister Ahod Ebrahim said that the Bangsamoro people’s ability to adapt, remain strong, and keep determination despite the Covid-19 pandemic, manifested in the economic performance of the region.

“The PSA final estimation of GRDP and GRDE are results of our shared work not just as the Regional Government but as one community, so we had to embrace such result as a whole and take a lesson too from such result,” Chief Minister Ebrahim said.

On the other hand, Bangsamoro Planning and Development Authority (BPDA) Director General Engr. Mohajirin Ali recognized that the current result of the region’s economic performance proved that BARMM is on track in fostering its concerted economic recovery efforts “remarkable by the significant double-digit decline in the region’s poverty incidence from 55.9% in 2019 to 39.4% in 2021.”

“This demonstrates again that we are now waving the dividend of peace and we must keep the momentum as we are going for the BARMM advancement program, aimed at accelerating the socio-economic recovery and sustaining progress towards poverty reduction and economic growth,” Ali said. (Kasan M. Usop, Jr./BIO)