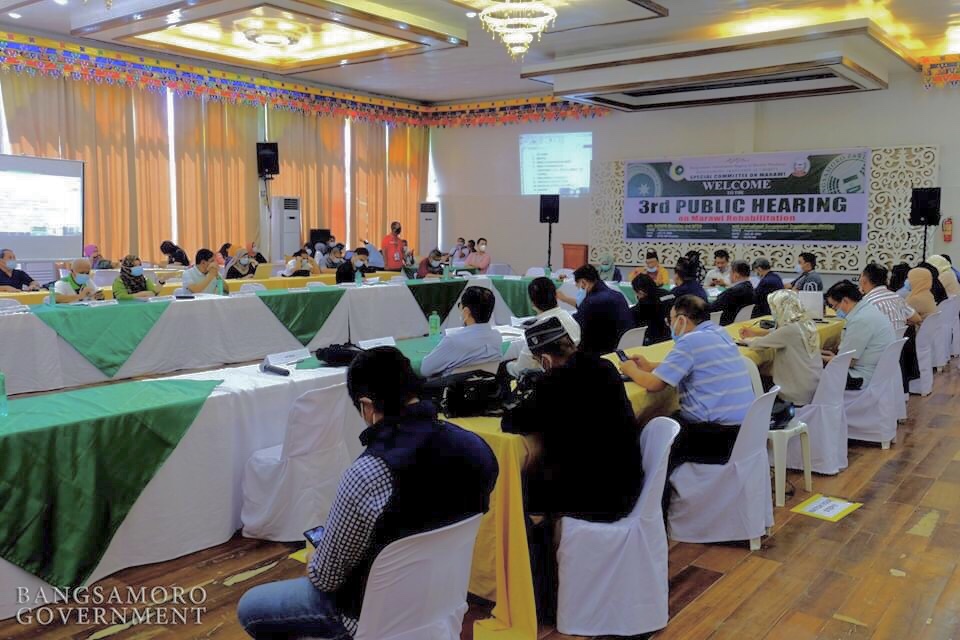 Cotabato City (July 13, 2020)—The Bangsamoro Transition Authority’s (BTA) Special Committee on Marawi held its third public hearing on Monday, July 13, to gather information on the efforts of the ministries and offices of the Bangsamoro Government for the recovery and rehabilitation of Marawi City.

Member of Parliament (MP) and Special Committee on Marawi Vice-chairperson Atty. Anna Tarhata Basman said, “It is a venue for these agencies and institutions to report and let the public know what they are doing, what they have done, and what their plans are, including targets.”

“We know that in the Bangsamoro Organic Law, the jurisdiction over Marawi rehabilitation was retained by the national government, through the Task Force Bangon Marawi,” Basman explained.

“But, we still maintain since it’s part of the constituency of the region. We need to give life to the mandate of the BARMM to supplement national government initiatives on Marawi rehabilitation,” she added.

The programs that each ministry presented include health programs by MOH; housing programs by the BARMM-Bridge through MPW; emergency assistance, social pension, and supplementary programs by MSSD); reconstruction of schools by MBHTE; and the update on the P500-million budget in the Bangsamoro Appropriations Act (BAA) by the BTA in support to the Marawi City’s reconstruction, rehabilitation, and recovery.

According to Basman, the special committee is targeting to pass their committee report to the parliament in August this year.

Marawi City is composed of 96 barangays, where 23 of which were the most affected area (MAA) during the devastating Marawi siege in 2017 that displaced over 40,000 households.

In September last year, the BTA formed the Special Committee on Marawi, through Resolution no. 41, to gather data and information on the status of the Marawi recovery, reconstruction, and rehabilitation, among other functions.

Deputy Chief Minister and Member of Parliament (MP) Ali Solaiman is the chairperson, while MPs Basman, Hamid Aminoddin Barra, and Abdullah Macapaar are Vice-Chairpersons. It has 29 members, including all 21 MPs from the Lanao Region.

The first and second public hearing were both held in Marawi City in January and February, respectively, with representatives from the national government, Internally Displaced Persons (IDP), and local government units (LGUs).

“The committee was able to gather a lot of information [and] observe lapses in terms of the policy, especially with the directly affected stakeholders. There are instances when the IDPs are unaware of the developments of the rehabilitation and we take it as our obligation to make them aware through our public hearings,” Basman explained.

Aside from the public hearings, the committee on Marawi also conducted dialogues through consultations or personally reaching out to the IDPs for assistance.

Last week, the special committee held a dialogue with the IDP representatives to get updates on their current status, considering the three-month gap between the public hearing caused by Coronavirus Disease (Covid-19) pandemic.

“But this is also to make them feel that we haven’t forgotten the duty of the Bangsamoro Government through the parliament to put attention to their plight,” Basman asserted.

The Special Committee on Marawi is set to hold another public hearing on July 20, 2020, with International Government Organizations (INGO). (Bureau of Public Information)