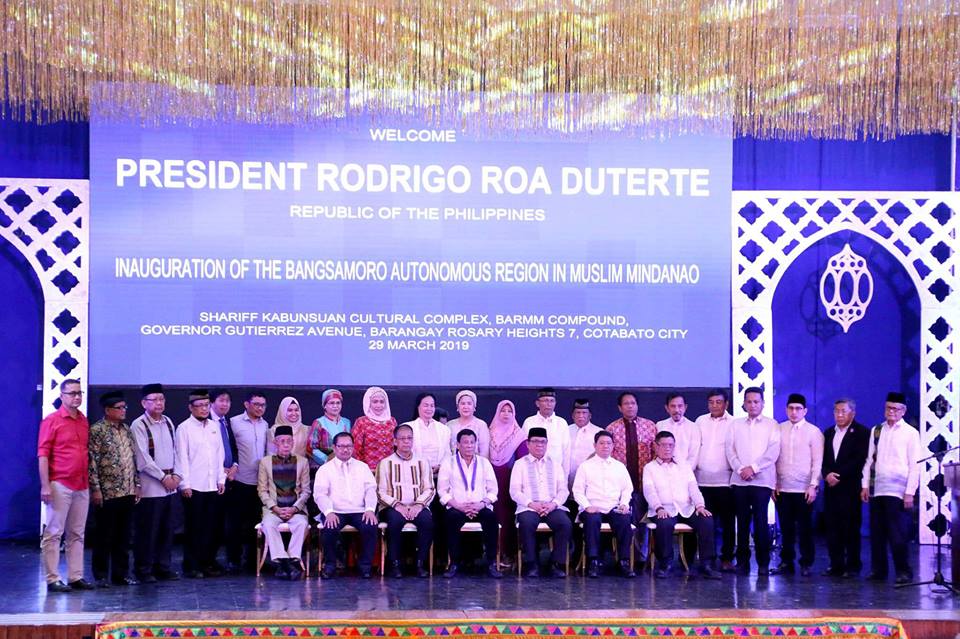 President Duterte banged the ‘agong’ to officially mark the inauguration of the newly-established Bangsamoro government.

The President expressed his extreme happiness on the realization of the BARMM. “We were able to realize at least the part, maybe not all, but the part of what the entire country could have wished for the Moro people of Mindanao,” he said.

Further, he stressed that the inauguration of the Bangsamoro government denotes that we are a step closer to the realization of a peaceful autonomous region that serves all Muslims, Christians, Lumads, and Indigenous People whose home is Mindanao.

He said his administration will exert effort for the benefit of the Bangsamoro people during his term for the next three (3) years as part of his solemn promise to Allah (SWT).

The Oath of Moral Governance

The members of the parliament took their oath of moral governance before the Qur’an. This is to ensure to the public that the Bangsamoro government is sincere in upholding good governance in the Bangsamoro region.

Swearing over the Qur’an in the name of the Almighty Allah is a religious practice to confirm a statement and to place emphasis upon it.

According to the Chief Minister, running this Bangsamoro government will be guided by the tenets of Islam through ‘moral governance’.

“As we start the Bangsamoro government, we are bound to make moral governance as the foundation of this leadership,” he said.

Friday’s inauguration, he said, marks history where it signifies their start of a new kind of Jihad. A jihad against poverty, wants, and neglect.

Chief Minister also expressed his gratitude to the President for his unwavering support to finally solve the conflict in Mindanao.

Earlier, the Bangsamoro Transition Authority (BTA) finally elected the officers of the parliament during its inaugural session.

Former House deputy speaker Atty. Pangalian Balindong was officially elected as the speaker of the parliament.

Raby Angkal and Dan Dimakenal will serve as secretary-general and sergeant-at-arms, respectively.