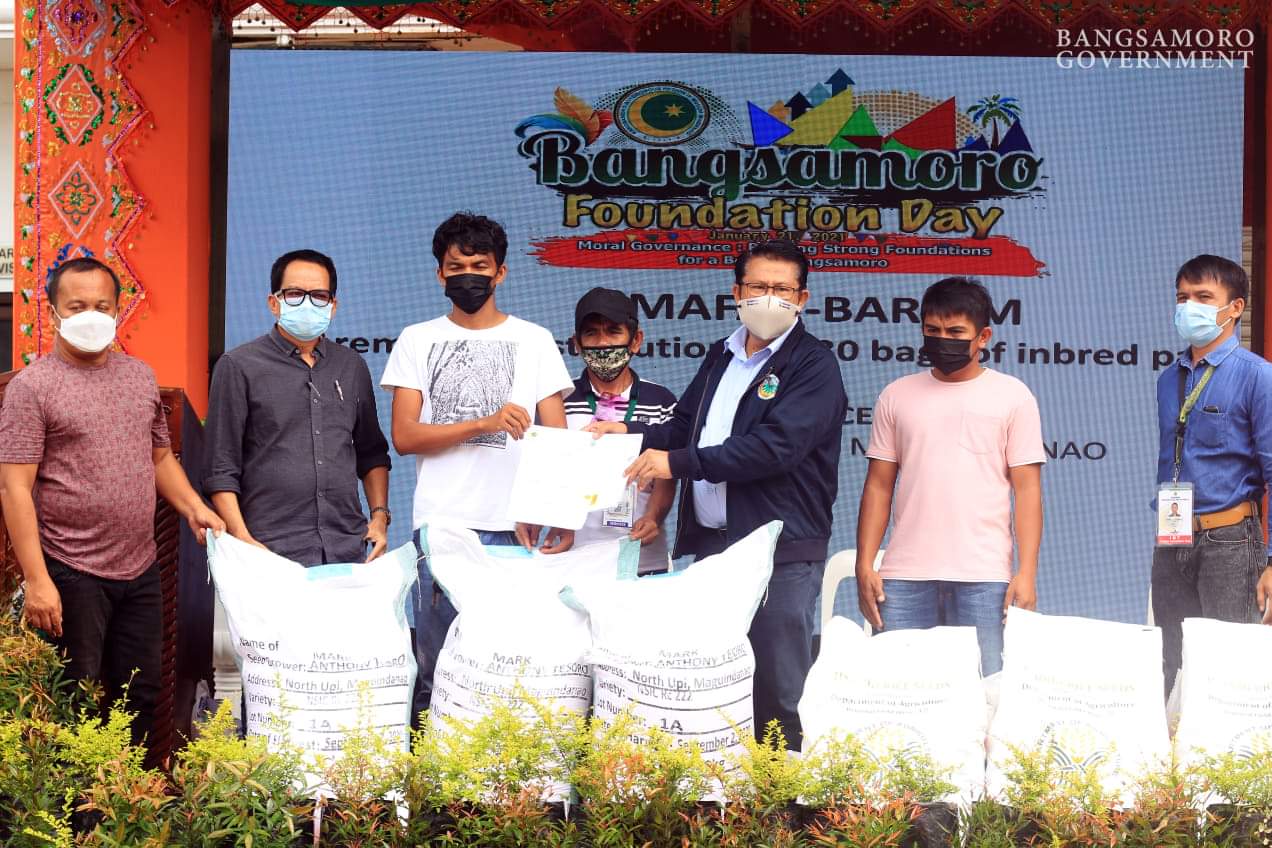 COTABATO CITY – Several farmers and fisherfolks from across the region received farming inputs and equipment during the Ministry of Agriculture, Fisheries, and Agrarian Reform’s (MAFAR) region-wide celebration of the Bangsamoro foundation anniversary from Jan. 18-21.

The machines were turned over through the ministry’s Rice Banner Program and High-Value Crops Development Program (HVCDP), in a ceremony held Wednesday, Jan. 20 at MAFAR compound, Bangsamoro Government Center, in the city.

Minister Yacob on Tuesday, Jan. 19, also distributed 538 bags of hybrid palay seeds worth P2.70 million to Salindao Farmers Coop in Shariff Aguak. On the same day, 112 bags of certified palay seeds, worth Php170,240.00, were given to Kakar Irrigators and Farmers Association Inc. from Datu Odin Sinsuat, while farmers from South Upi received 107 bags worth Php162,640.00

Furthermore, MAFAR also turned over one (1) unit shredder machine to Mibpulo Unified Agriculture Cooperative from Barangay Kaladturan in Gen. Salipada K. Pendatun municipality. Worth Php250,000.00, the machine was turned over through the ministry’s Organic Banner Program.

The fingerlings were coupled with 1 sack (10 kgs) of starter feeds. Bacolod Fishermen Cooperatives were the recipient of 20 sets of seaweeds farm implements/inputs complete with floaters, tie wires, and softie.

MAFARLENGKE, or Local Exchange and Network of Goods in any Kind of Emergency, is one of the flagship programs of the ministry wherein fresh and processed agri-fishery products from various farmers and fisherfolks cooperatives are showcased and sold at affordable prices.

MAFAR opened the MAFARLENGKE exhibit across the region’s five provinces, including on its regional office in Cotabato City.

‘MAFARLENGKE sa BGC’ or Bangsamoro Government Center earned a total of P326,239.00 total gross sale from Jan. 18 – 21. It was participated by 31 cooperatives, including agencies such as Philippine Coconut Authority Islamic Relief Philippines, and the Ministry of Social Services and Development.

Minister Yacob ensured to provide more opportunities to the Bangsamoro people and uphold self-sufficiency, food security, and intensify the production of basic commodities and other food sources in the region.

“We will even ramp up the delivery of basic services that our people deserve. Let us continue working together as we aim to provide more sustainable and conducive livelihood programs for our farmers, fisherfolks, and agrarian reform communities in the Bangsamoro region,” he said. (Bangsamoro Information Office)

Bangsamoro Yesterday and Beyond: The Gains of Peace Process
January 21, 2022