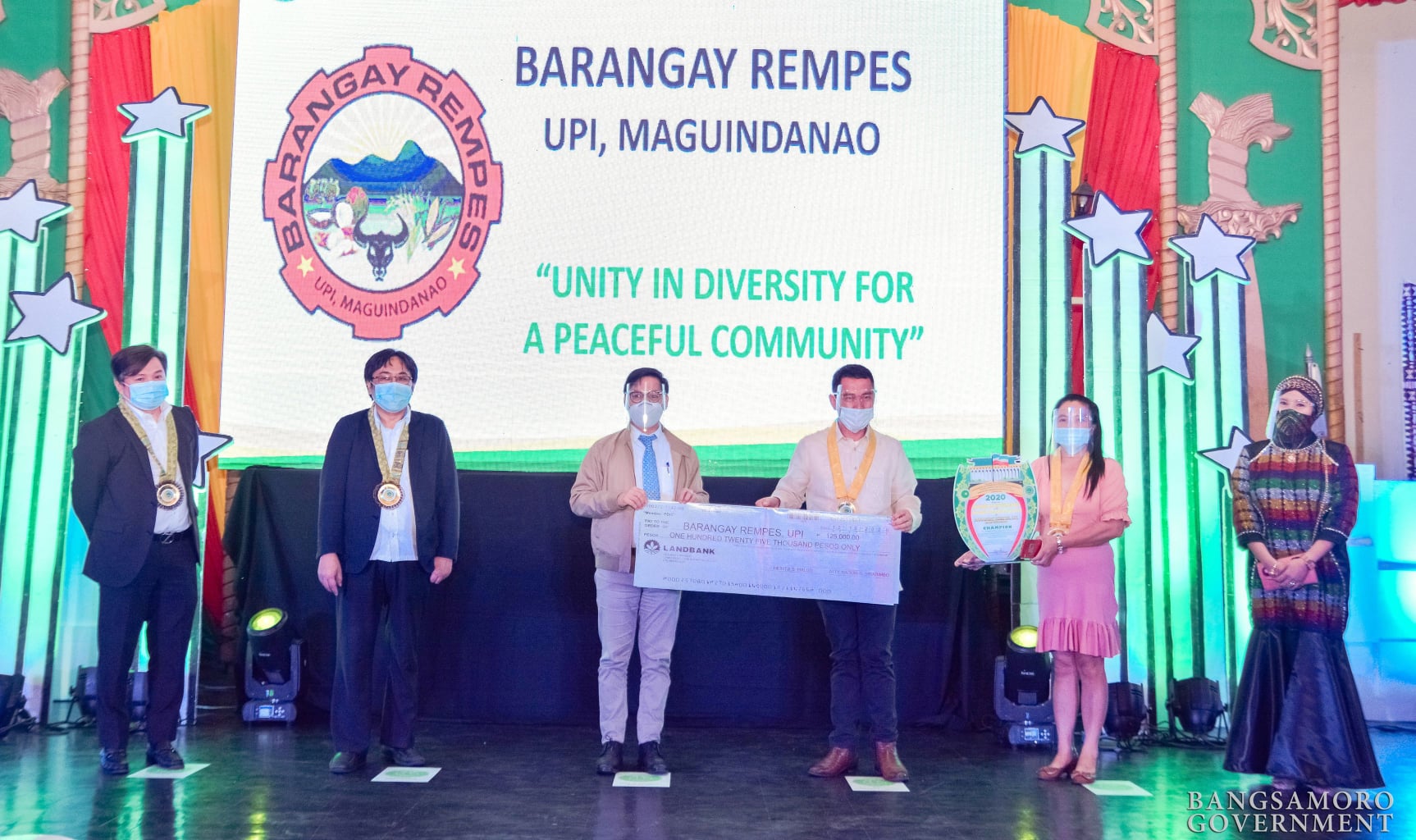 COTABATO CITY— Some 118 Local Government Units (LGU) in the Bangsamoro region were granted with awards and incentives for their excellent performance for the year 2020.

Minister of Interior and Local Government Atty. Naguib Sinarimbo said this is through the Local Government Functional Appraisal Award (LoGFA) and Lupon Tagapamayapa Incentive Award (LTIA) of his ministry. The awarding ceremony was conducted on Friday, December 18, at the Shariff Kabunsuan Cultural Complex in the city.

51 LGUs from the provinces of Maguindanao, Lanao del Sur, Basilan, Sulu, and Tawi-Tawi were awarded with the LoGFA, wherein each received Php200,000.00 and plaques of recognition.  LoGFA aims to define, operationalize, and assess the functionality of LGUs in the region.

For the 4th-6th class category, Brgy. Kauran in Ampatuan, Maguindanao was declared as champion. First and second places were awarded, respectively, to Brgy. Mao in Datu Abdullah Sangki of the same province and to Brgy. Pindolonan in Buadiposo Bunting, Lanao del Sur.

For the 1st-3rd class category, the champion was Brgy. Rempes in Upi, Maguindanao, 1st and 2nd placers were Brgy. Cebuano Group in Wao, LDS and Brgy. Tumahubong in Sumisip, Basilan.

Furthermore, Php20,000.00 each were also given to 10 barangays from the provinces of Maguindanao, Lanao del Sur, Basilan, Sulu, and the city of Lamitan for being regional finalists.

“This aims to recognize functional local governments and barangays whose ‘Lupon Tagapamayapa’ have excelled in settling disputes in their communities,” Sinarimbo said.

Fourty-nine BARMM municipalities received the said award—25 awardees for sustaining drug cleared status of their drug-affected barangays, and 24 for maintaining a drug free status for their unaffected barangays.

Aside from LGUs, MILG also gave recognition to CSOs who have been implementing interventions to drug-affected communities and contribute to the pursuit of a drug-free region. Awardees were Council of Sumisip Youth Leader, Kadtabangan Foundation for Peace and Development Advocates Inc. and Balay Mindanaw.

Sinarimbo said the ‘Salamat Award’ is the most prestigious award that the region would undertake to recognize LCEs who show excellent performance.

SEAL Program aims to contribute in the establishment of a Moral Governance in the BARMM by popularizing the principle of volunteerism and primary common good as demonstrated by Sheikh Salamat Hashim as key to regional peace and development.

Awarding ceremony for SEAL will be held next year where each awardee will be given plaque of recognition, gold plated medallion worth 250,000 and 2.5 million worth of project.

Sinarimbo said it would also encourage local chief executives and leaders to embrace the principles of accountability, participatory and service-oriented leadership as key to local development; and instill in the heart and mind of leaders and communities the culture of patriotism and promotion of social responsibility. (Bangsamoro Information Office)