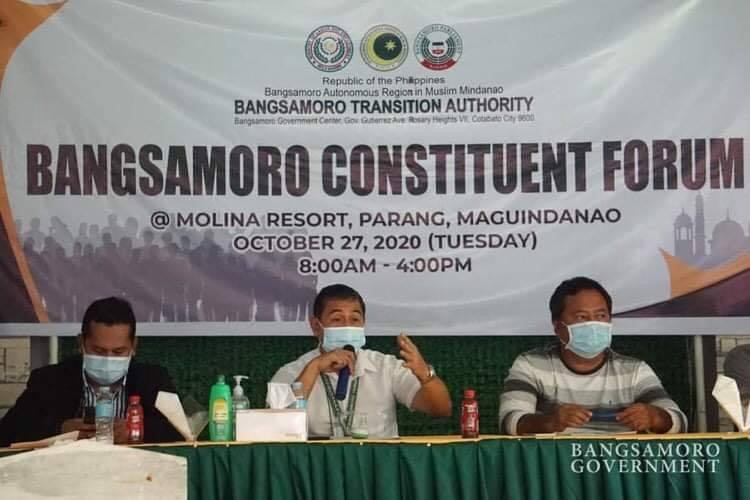 COTABATO CITY—Ministry of Labor and Employment-BARMM (MOLE-BARMM), in collaboration with the Office of the Member of Parliament Romeo K. Sema, conducted its second Bangsamoro Constituent Forum Tuesday, Oct. 27, at Molina Resort, Parang, Maguindanao.

The forum aimed to increase the level of awareness of the constituents of Bangsamoro region regarding the programs and activities of the Bangsamoro Government.

Representatives from local government units of Barira, Matanog, Buldon, and Parang participated in the activity.

MOLE minister Sema emphasized that the Bangsamoro Government is committed to serve the Bangsamoro people with outmost integrity and morally upright governance.

This will also be an avenue to hear the issues and concerns of the people in the communities of Iranun areas in the region.

MOLE presented their priority programs and activities which have been implemented such as:

The Ministry of Trade, Investments and Tourisms (MTIT), Ministry of Environment, Natural Resource and Energy (MENRE), Ministry of Agriculture, Fishiries and Agrarian Reform (MAFAR), Technical Education, Skills Development Authority (MBHTE-TESDA), and Ministry of Science and Technology (MOST) also presented their programs and activities.

Furthermore, Bangsamoro Autonomy Act No. 9, also known as Recruitment Agency Act of 2020, was approved by the Bangsamoro Transition Authority. The said law authored by MP Romeo Sema aims to protect the rights of the Bangsamoro workers from abuse.

Also, Bill No. 36 or the Overseas Bangsamoro Workers Act of 2019 was approved in Committee level and will be discussed in plenary session soon.

BARMM set to take over supervision of Cotabato City in December
November 28, 2020