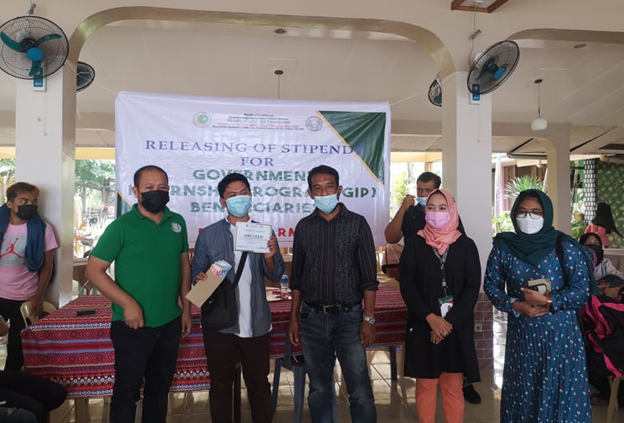 Ms. Haipa Jumdain (2nd right), MOLE Tawi-Tawi Officer-in-charge, along with regional officials posed for souvenir picture with a recipient – beneficiary after the release of the GIP stipend at Beachside Inn and Restaurant in Bongao, Tawi-Tawi, on August 29, 2021

TAWI-TAWI—Bangsamoro Ministry of Labor and Employment (MOLE) on Sunday released in Bongao the stipends of 149 Government Internship Program (GIP) beneficiaries composed of the first batch applicants, who worked from May to July, this year.

GIP is under the Bureau of Employment Promotion and Welfare program of the MOLE, which allotted 200 GIP slots for unemployed graduates of this province.

According to Haipa Jumdain, MOLE Tawi-Tawi officer-in-charge and senior labor and employment officer, each of the beneficiaries received a total of Php14,850.00 for three months from their monthly allowance of Php4,950.00.

“This is 75 percent stake of the BARMM as 25 percent of the stipends is shouldered by the offices to which the beneficiaries were assigned,” Jumdain added.

“It is also satisfying to note po, that 15 of our beneficiaries whom we assigned to the provincial government of this province are likely to be absorbed by the PLGU for continuing services.  This was the commitment of Governor Ishmael Sali, in his desire to help these graduates,” the senior LEO said.

The GIP gathered 152 applicants. Fifty-one of whom were shortlisted to complete the 200 slots of GIP for this year. (Bangsamoro Information Office)