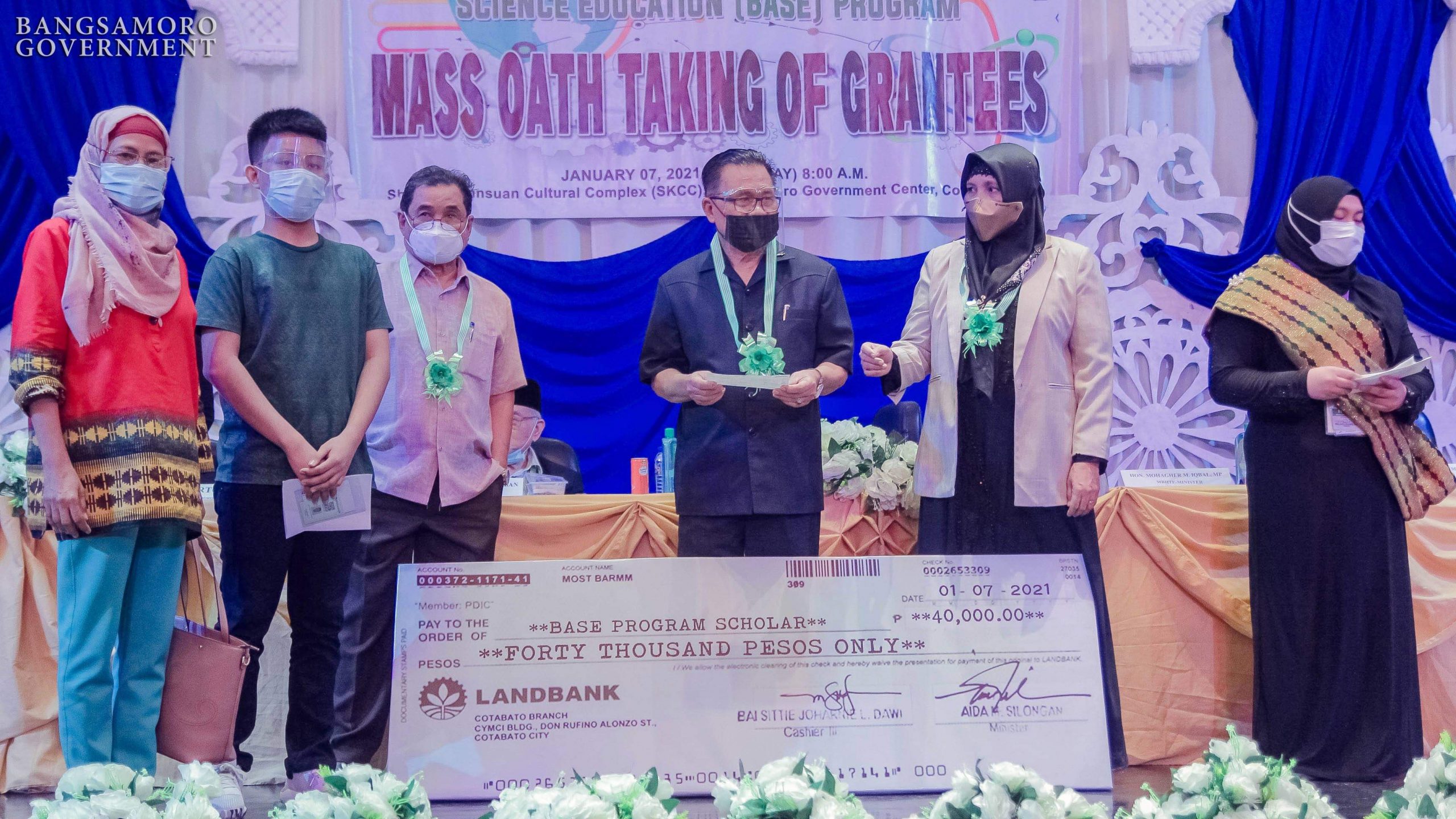 COTABATO CITY – A total of 126 students from across the Bangsamoro Autonomous Region were granted with scholarships initially worth P40,000.00 from the Ministry of Science and Technology (MOST).

On Thursday, January 7, Bangsamoro Chief Minister Ahod Ebrahim, MOST Minister Aida Silongan, and Education Minister Mohagher Iqbal led the oath taking of the first batch of grantees – 73 students coming from the province of Maguindanao, 63 barangays in North Cotabato, and Cotabato City. A similar ceremony will be also conducted for the 53 grantees from the provinces of Lanao del Sur, Basilan, Sulu, and Tawi-Tawi.

The scholarship is under the MOST’s Bangsamoro Assistance for Science and Technology (BASE) Program, launched July 1 last year. It aims to provide financial cash assistance to qualified senior highschool graduates who intend to pursue productive careers in science and technology, either in private or public schools. [Related Story: MOST calls applicants for its cash assistance program for science education]

Minister Silongan said the program is a first of its kind implemented in the Bangsamoro region.

“This program is a response to the very low performance in Science and Technology Innovation in the region where we are several decades behind in terms of inventions, innovations, and even numbers of science researchers compared to the other regions,” Silongan said.

Meanwhile, Chief Minister Ebrahim encouraged the scholars to lead change in the field they have chosen and represent the best of what the Bangsamoro has to offer in their respective universities.

“I encourage you to make full use of this opportunity, to live, love, and dream together; to serve a post-pandemic society, to make lives better for your loved ones, and for the entire Bangsamoro,” Ebrahim said.

The students have undergone a strict selection process before being granted the scholarship. Their examination was supposed to be held on August last year but was rescheduled to October due to the Coronavirus crisis. Exam results were released in December 2020.

As scholars, part of their obligations are: (1) maintain a passing grade in all academic subjects every semester/term until completion of the course, (2) submit their reports, duly certified, on the indicated period, (3) submit copy of registration or certificate of enrolment at the start of the semester and report of grades for every academic subject taken at the end of each semester, and (4) maintain good physical condition and moral standing, among others. (Bangsamoro Information Office)