PBBM, the Bangsamoro, and the peace process 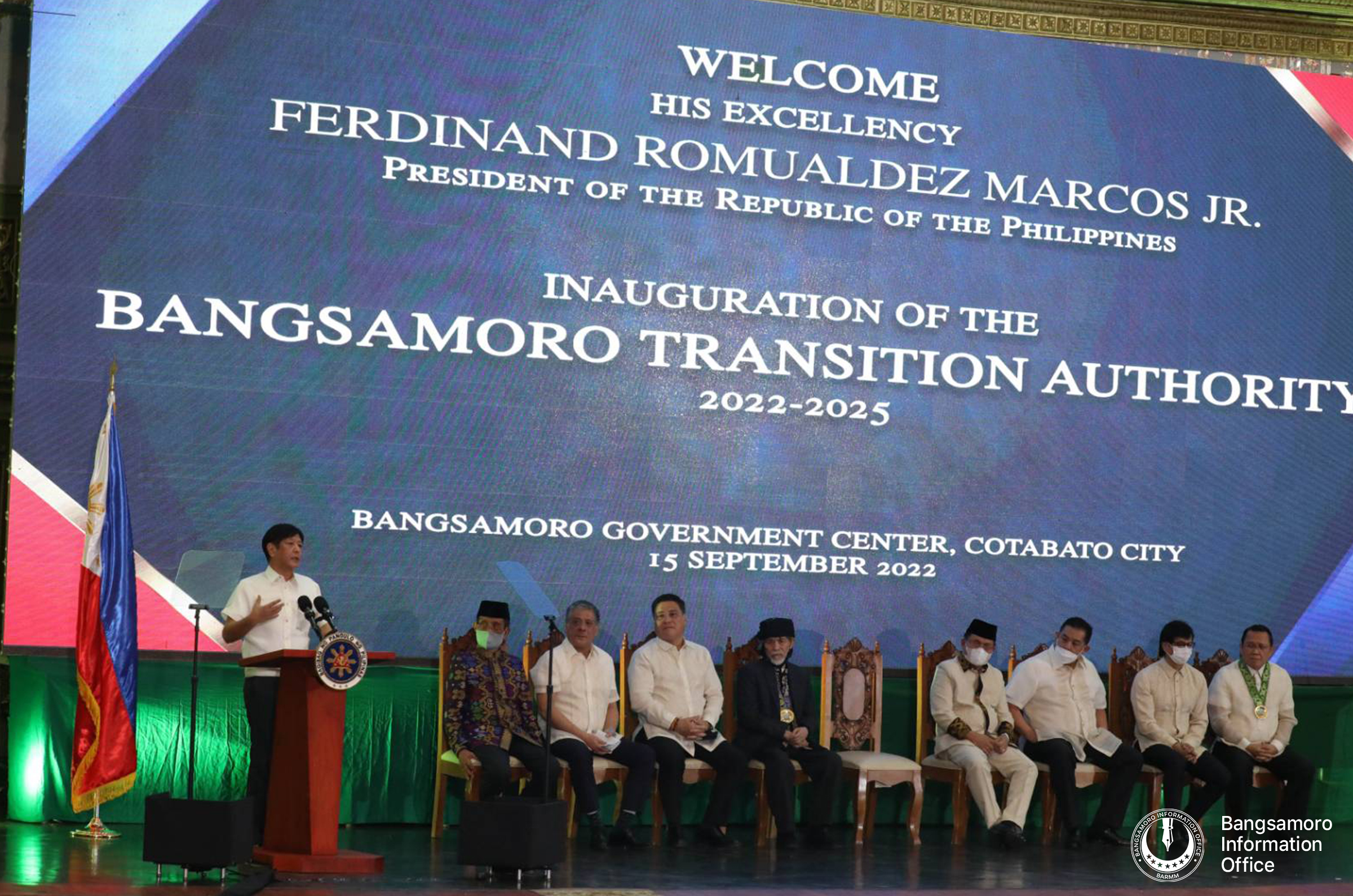 COTABATO CITY— Over a month ago, President Ferdinand “Bongbong” Marcos Jr., appointed the 80 members of the Bangsamoro Transition Authority (BTA) who will serve for a period of three years, from 2022-2025. The widely-anticipated and celebrated event was lauded by various sectors as it manifested the President’s fulfillment to the Bangsamoro peace accords.

As Chief Minister Ahod Ebrahim welcomed the President to his first-ever official visit in the Bangsamoro Government during the inaugural session of BTA Thrusday, Sept. 15, Ebrahim once again pronounced his dedication.

“Last month’s historic oath-taking ceremony in Malacanang signals the positive start of the second chapter of the transition period and we are committed to sustaining the momentum and the trust you have given us,” said Ebrahim.

At the same event, the President assured his commitment to the peace and development in the region.

“As your President, I assure you, the BTA and all the Bangsamoro people, of this administration’s full and unwavering commitment to the peace process and to the BARMM,” Marcos said.

“We are steadfast in our commitment to the peace process here in the southern Philippines, so we push for socio-economic development interventions to promote peace and development in areas affected by decades of conflict,” he added.

Prior to the Malacañan’s pronouncement of the final list of appointed Members of Parliament (MP), the waiting period was full of various speculations.

However, everything came to peace when the list was finally out and the appointees took their oath on August 11, 2022, in Manila; President Marcos Jr. made a decisive action and appointed the new BTA members consistent with the Bangsamoro peace agreement.

In his speech during the oath-taking ceremony in Malacañan, Presidential Adviser on Peace, Reconciliation, and Unity Carlito Galvez, Jr., who has been working on peace agenda in the region for a long period, commended the President’s commitment in putting BARMM at the forefront of his administration.

“Through your [Pres. Marcos] decisive action, you are ensuring the completion of the implementation of all signed Bangsamoro peace agreements, which is the centerpiece of your administration’s peace policy agenda,” he added.

One of the impressive qualities of the composition of the  BTA is the fair representation of the minority groups in the Bangsamoro homeland. To further ensure exclusive participation of all sectors, representatives from the indigenous people and settlers’ community were also appointed.

“I am very happy and excited to work with other members of the parliament,” shared MP Nurredha Misuari in an exclusive interview during the inaugural session.

27-year-old MP Nurredha is the daughter of the MNLF Founding Chairman Professor Nur Misuari who made it the final cut of the 12 nominees of the organization. She is among the younger generation of women leaders in the reconstituted BTA.

As she disclosed her aspirations for the Bangsamoro, she plans to focus on working with the youth and women sectors.

With the participation of several MNLF members, the reconstituted BTA was seen to unite leaders in the region. In fact, Secretary Galvez even labeled the composition as ‘United BARMM’. As the President continuesly call for unity, the BARMM leaders heeded to the call by taking the much-awaited and most humbling move.

Few days prior to the inaugural session, Chief Minister Ebrahim, along with other officials of the Bangsamoro Government, paid a courtesy visit to the house of Misuari in Davao City. This remarkable turn of events rekindled the sense of cooperation between the two Moro organizations.

With our leaders in the region heeding to the call of the President for unity, it is evident that everyone, both the national and the autonomous Bangsamoro government have roles in nation-building. (Abdullah Matucan/BIO)