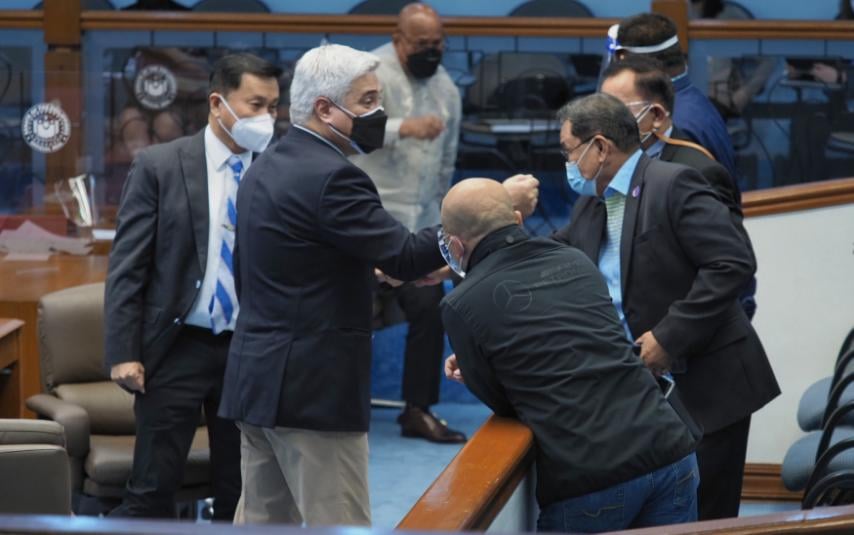 Senators Francis Tolentino and Juan Miguel Zubiri (left side) fist-bumped with BARMM delegates such as Members of Parliament Mohagher Iqbal, Omar Yasser Crisostomo Sema, and Eddie Alih (right side) after the Senate’s passing of SB 2214 on Monday, September 6, 2021. (Photo from Red Santos-Office of Senator Zubiri)

COTABATO CITY—Senate approves on third and final reading the Senate Bill (SB) 2214 with 15 YES votes, 3 NO votes, and 1 ABSTENTION on a plenary session on Monday, September 6.

SB 2214 seeks to reset the first regular elections in the Bangsamoro from 2022 to 2025 thereby extending the transition period for another three years.

Senator Francis N. Tolentino, who sponsored the bill in the Senate, said the several instances made the implementation of the peace agreements on the rocks, and that resetting the elections in 2022 will help ease in putting the promises of these agreements in place for the Bangsamoro people.

“Out of genuine desire to see the fullest expression of the peace agreements promises, [we] judiciously decided to postpone the next elections, next year,” Senator Tolentino said.

“The resetting of the parliamentary elections in the BARMM shows an honest and compassionate appraisal of the failures and hardships of implementing a complex peace agreement such as CAB [Comprehensive Agreements on the Bangsamoro] amidst the Covid-19 pandemic,” Tolentino added.

The bill will amend the Section 13, Article XVI of the Republic Act 11054 otherwise known as the “Organic Law for the Bangsamoro Autonomous Region in Muslim Mindanao”, which sets the first election of the new government entity in May 2022.

“By extending the transition period – the BTA gets ample time to finish the job and make sure that the next regional officials will work under a system that befits the realities of the Bangsamoro and responds to the changing times,” the Chief Minister added.

In the past months, several caravans and calls were held by civilians both in Mindanao and in Manila to push both the House of Representatives and the Senate to pass the bill. Several leaders and personalities have also shared similar calls, saying the bill will help save the gains of the peace process. (Bangsamoro Information Office)