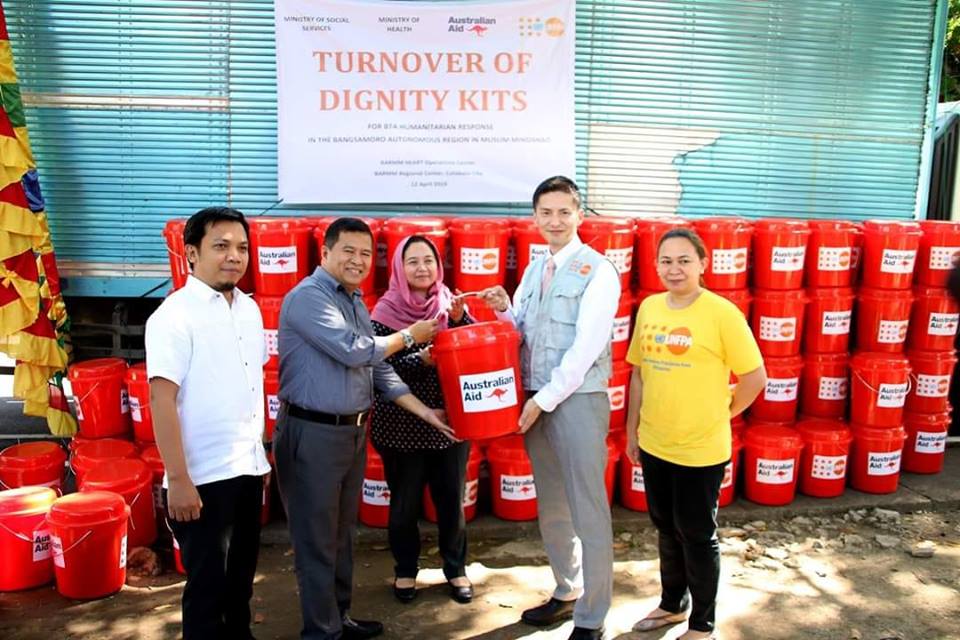 Cotabato City (April 12, 2019) – To meet women’s immediate hygiene needs, iimprove their mobility and protection, about 957 dignity kits will be distributed to lactating mothers and pregnant women who are displaced by the recent armed conflict in Maguindanao.

Through the Ministries of Health and Social Services, the United Nations Population Fund—the UN’s reproductive health and rights agency—will hand over dignity kits starting tomorrow, April 13. It aims to secure the safety and promote the well-being of the displced women and the communities as a whole.

Lori Kato, UNFPA’s country representative, said that the dignity kits are an integral part of UNFPA’s assistance to any humanitarian crisis as it is designed to meet the specific hygiene needs of women and girls of reproductive age.

Official data of social services ministry show that more than 45,000 individuals have been displaced due to conflicts across the Bangsamoro autonomous region. The UNFPA estimates that there could be more than 1,400 pregnant women among the affected population and around 500 are expected to deliver in the next three months. Moreover, at least 900 women have given birth in the last six months.

“In times of crisis, it is more important to protect the dignity, safety, and reproductive health of pregnant and lactating women,” Kato said.

She noted that women do not stop getting pregnant or delivering babies just because an emergency hits.

Dr. Saffrullah Dipatuan, minister of health, and Atty. Jajurie led the turn-over ceremony together with Kato on April 12