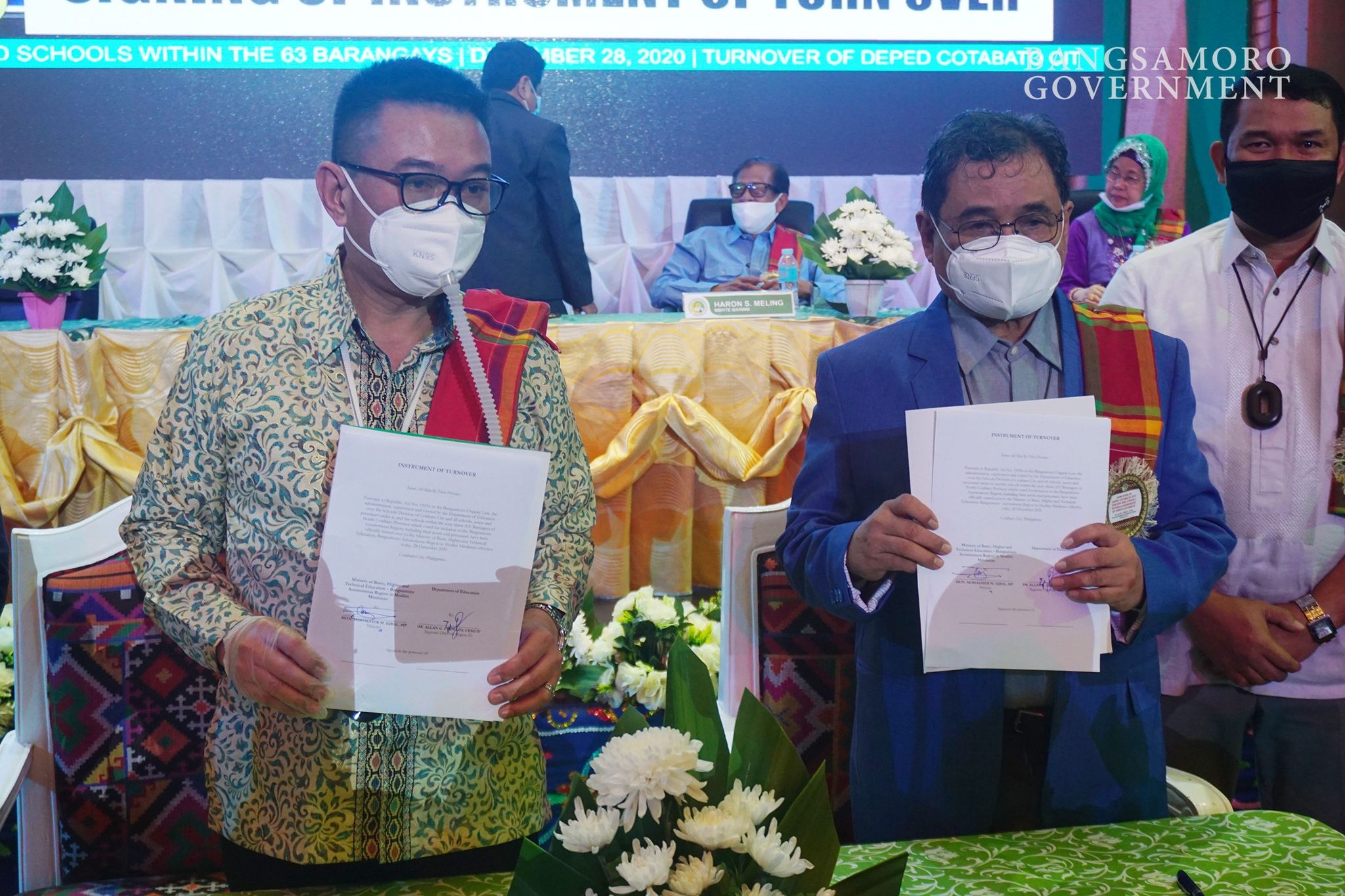 COTABATO CITY – The Department of Education (DepEd-National) officially transferred Monday, Dec. 28, the management and integration of the DepEd Cotabato City Division, along with schools from 63 barangays in North Cotabato, to the Bangsamoro Government’s Education Ministry.

Schools Division Office (SDO) of DepEd-Cotabato City turned over a total of 83 schools of which 43 are public, 39 private, and 1-State University/secondary school. Meanwhile, North Cotabato turned over 103 schools comprised of 85 elementary and 18 secondary schools.

Of these schools, 2,195 teaching personnel are from Cotabato City division and 2,380 are from North Cotabato Province.

Farnazo represented DepEd Secretary Leonor Magtolis Briones for the formal signing of the instrument of turnover between the DepEd-National and MBHTE Minister Iqbal.

“I have no doubt that we [MBHTE and DepEd] will have a rich and fruitful partnership. We will be working together and be considering the national interest as well as the historical, cultural, and distinct identity of BARMM expressed in its system of education,” Briones said via a video message.

Briones also stressed that the educational environment of the BARMM is going to be a subsystem of national government’s educational system characterized by synergy and interconnection.

“This is indeed a very happy day. Today’s ceremony is a day not just of a transition but also of integration, unity, and peace,” Briones added.

Meanwhile, MBHTE Minister Iqbal ensured in his acceptance speech that the ministry will observe the principles of moral governance towards improving public performance, delivery of education services, and reducing gaps in the Bangsamoro education sector.

“As long as we set aside our narrow interests and prioritize the welfare of the Bangsamoro education community and the general public, I am confident we will make significant and positive changes to the BARMM education system,” Iqbal added.

On the other hand, BARMM Chief Minister Ahod Balawag Ebrahim underscored that “there is nothing to be afraid of, and the strongest asset the people can get from this entire process is collaboration.”

“With MBHTE and DepEd standing side-by-side, we are assured that this transition will not be difficult and I promise you that there will be no discrepancy on the part of our teachers, In shaa Allah,” said Ebrahim.