In the southern part of the Philippines, the Bangsamoro region has different amalgamated arts and cultures. This includes the popular tribe of Maranao people who strengthen and possess a strong faith in Islam in the country.

Maranao or Meranaw is a term commonly defined as “people of the lake”, referring to Lake Lanao in the province of Lanao del Sur—hailed as one of the ancient lakes in the world.  They are known for their metal crafts, architecture, colorful dances, cultural attire, tapestry, distinctive cuisine, and epic literature.

They uphold these traditions despite the modernization. In fact, during the month-long celebration of the 63rd Lanao del Sur founding anniversary dubbed “Pakaradyaan O Sarimanok” in July 2022, the Maranaos showcased their rich and fascinating culture.

“We are representing here, not only the different art forms, [but] we are also showcasing the deep and rich culture and way of living of Maranaos in order to attract people. We can do so by showing that we have our own dance, song, musical, and symbol that we can proudly present to the world as our own,” Lanao del Sur Representative Zia A. Adiong said.

The Sarimanok is a legendary bird that serves as the symbol of the Maranaos. Came from the words “sari” (a garment of different colors deeply related to their culture) and “manok” (rooster with its beautiful and colorful feathers), it, accordingly, represents good fortune and prosperity and is also an essential trademark of their art forms. 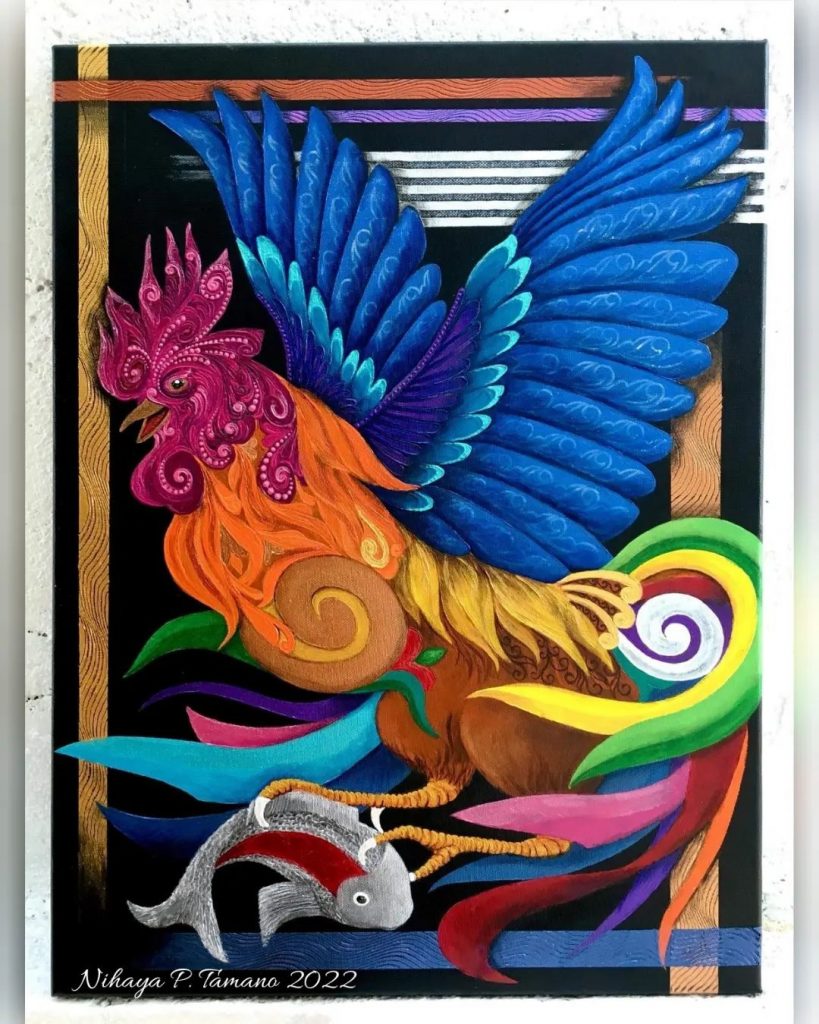 The folklore of Sarimanok is traced back to a folk hero named Rajah Indarapatra, who married a water nymph, Putri. They had two sons: the Seen, who is ancestor of the present day maranaos, and Unseen, who became the deity that they call on in their rites and rituals. Accordingly, the two brothers made an agreement to protect each other from malevolent spirits that could cause illnesses.

The itotoro or the totem bird (rooster), which is taken-cared of by the Seen (Maranaos), served as the link to the Unseen spirits.

The highlight of the celebration included the most awaited cultural dances of the Maranao. It is characterized by colors and instrumental sounds with elegant fabric decorations. Most of the Maranao’s traditional and cultural dances were created from the Darangen, an ancient epic of the Maranao community that was well performed at festivals and occasions for entertainment.

Kapmalo-malong, also known as Sambi sa Malong, is an elegant cultural dance that exemplifies different ways of using malong. Performed by men and women, the dance highlights malong‘s colorful designs and how it is worn.

To fully absorb the steps of this dance, one must learn and understand the significance of malong – a simple tubular yet highly functional piece of cloth for all Filipino-Muslim. 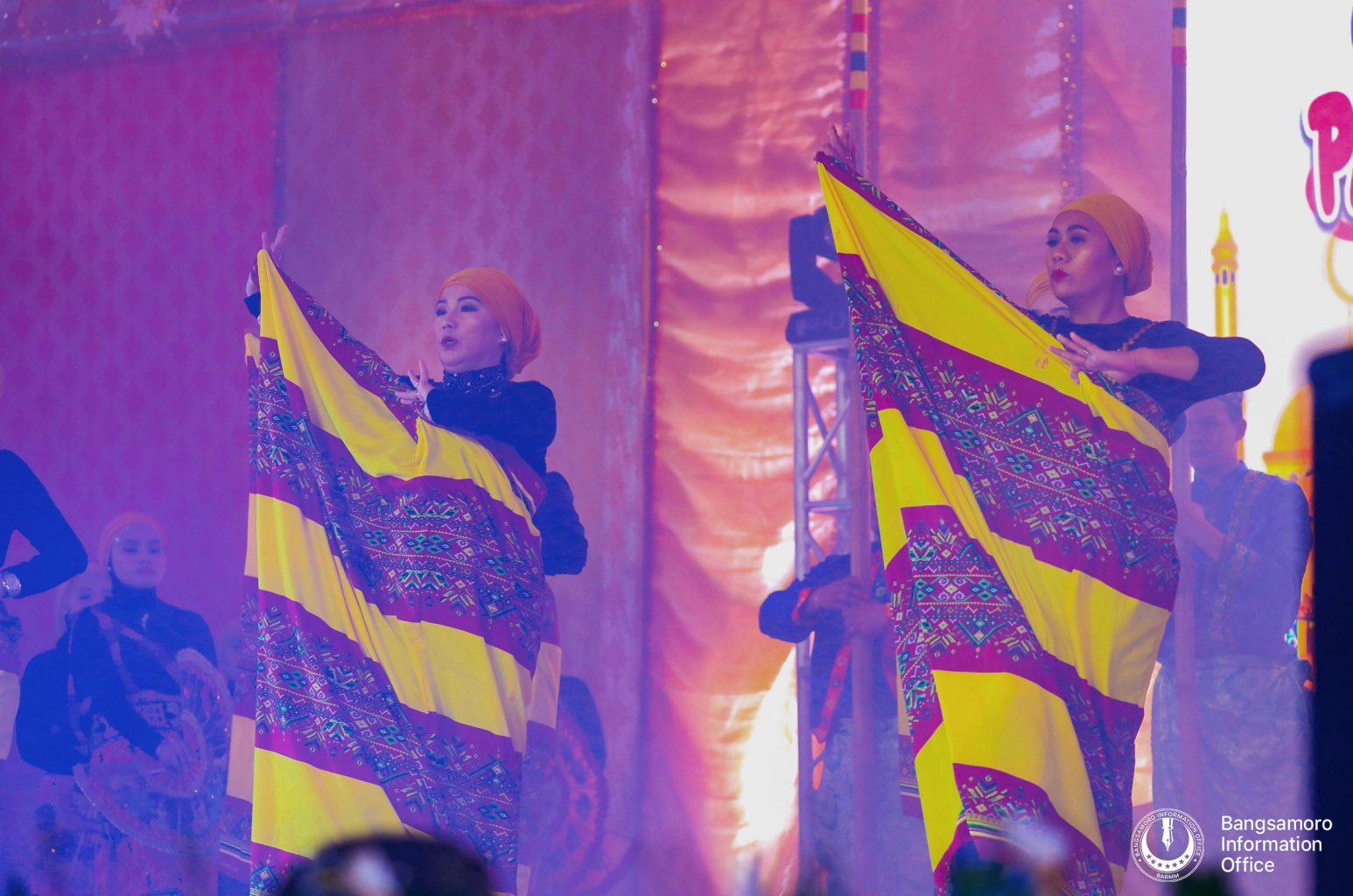 Marawi City Schools Division Superintendent Anna Zenaida Unte-Alonto of the Ministry of Basic, Higher and Technical Education (MBHTE) stressed that they are proud to enjoy wearing malong and landap every Wednesday of the week along with her teaching personnel and staff.

“As a Bangsamoro, we should always be proud and preserve our culture and Lanao Del Sur is looking forward to the strengthening of our own identity. As MBHTE Minister Mohagher Iqbal said, ‘we must not forget who we are despite of modern generation’,” SDS Alonto said.

One of the most famous royal dances of the Maranaos is the singkil, a popular form of dancing in which the woman is elegantly dressed and gently steps in and out of the clipping bamboos while holding a fan and moving to the accompaniment of kulintang [a set of eight small gongs of bronze, on a wooden stand in the shape of a Sarimanok] and agung [a set of two wide-rimmed, vertically suspended gongs used by Filipino-Muslim] which are the main instruments used in singkil music. 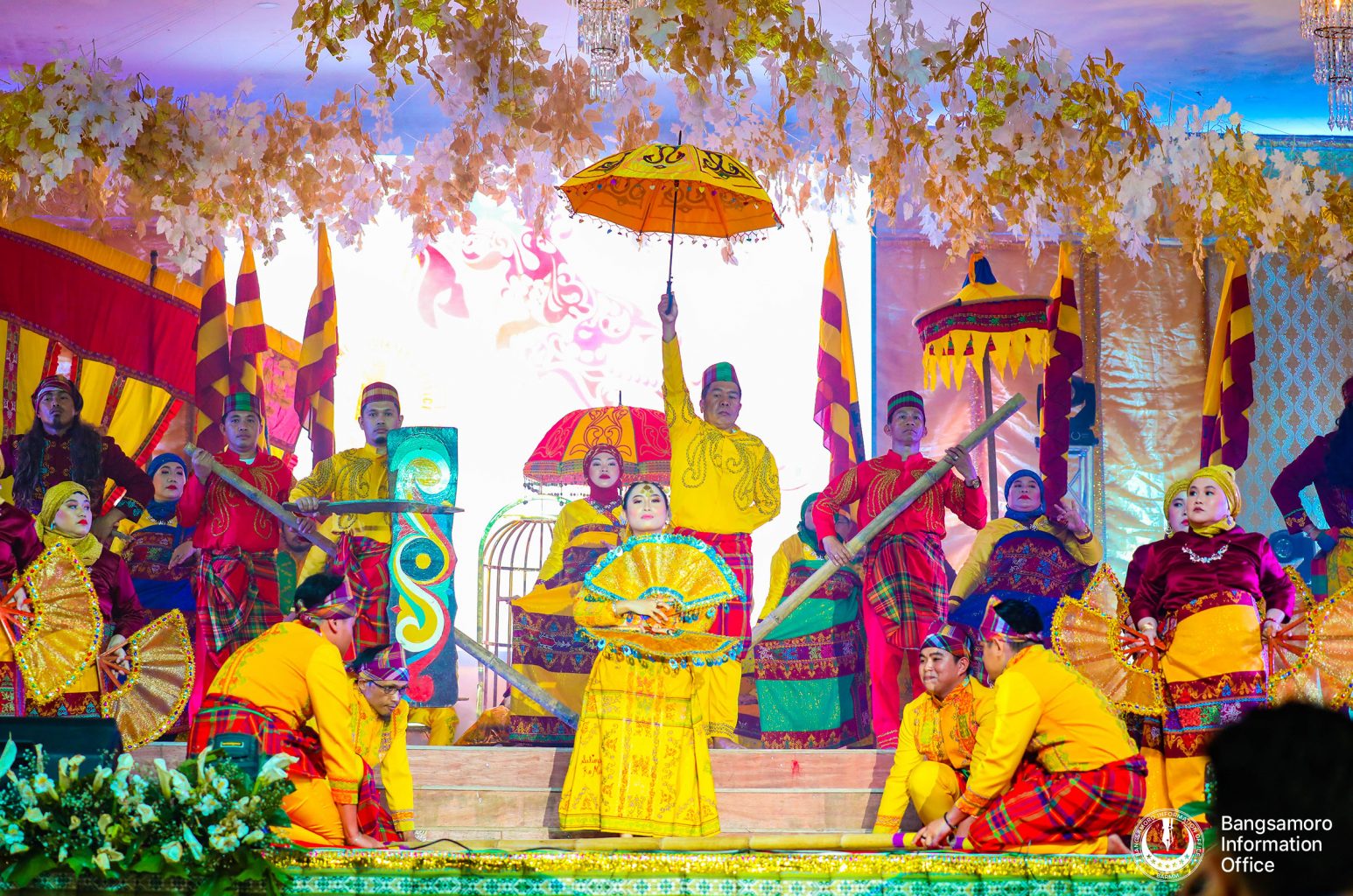 “Our culture really speaks of our identity [and] shows that we have a form of civilization even prior to the conception of the Philippine Republic. As a Bangsamoro, I am proud to say that the popular Singkil dance was originated in BARMM region particularly here in Lanao del Sur Province,” Rep. Adiong added.

Another famous Maranao dance is Kapagapir-apir in which the ladies gracefully perform with their hands, holding fancily colored fans, and then slowly moving in small steps [kakini-kini] while twisting and balancing, with fans covering their faces. 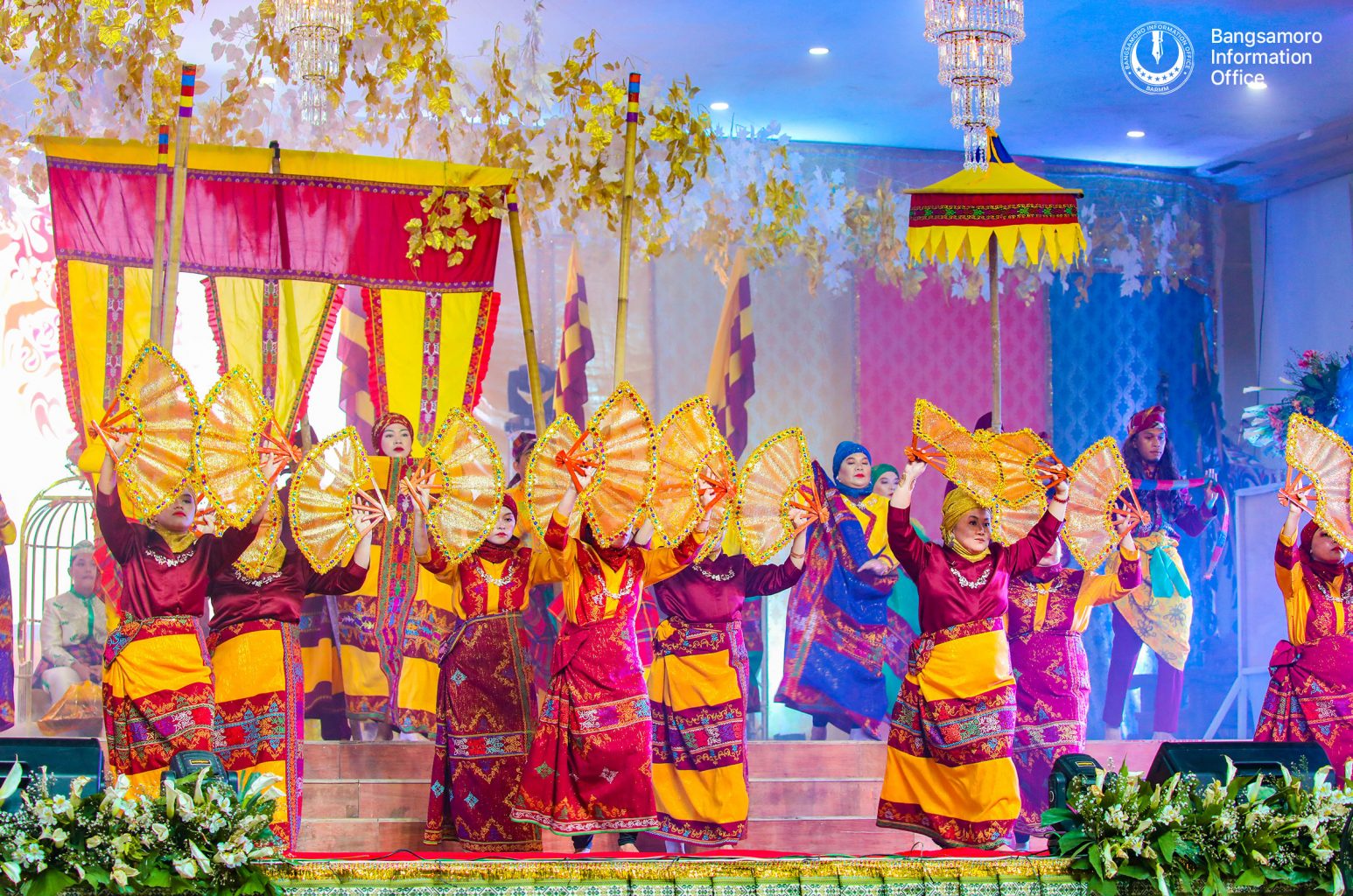 Travelers from neighboring provinces should not miss to taste and experience the sakurab. It’s made with palapa (dried coconut shavings and dried chili), local native scallions and chili. It’s a common appetizer for the Maranaos. 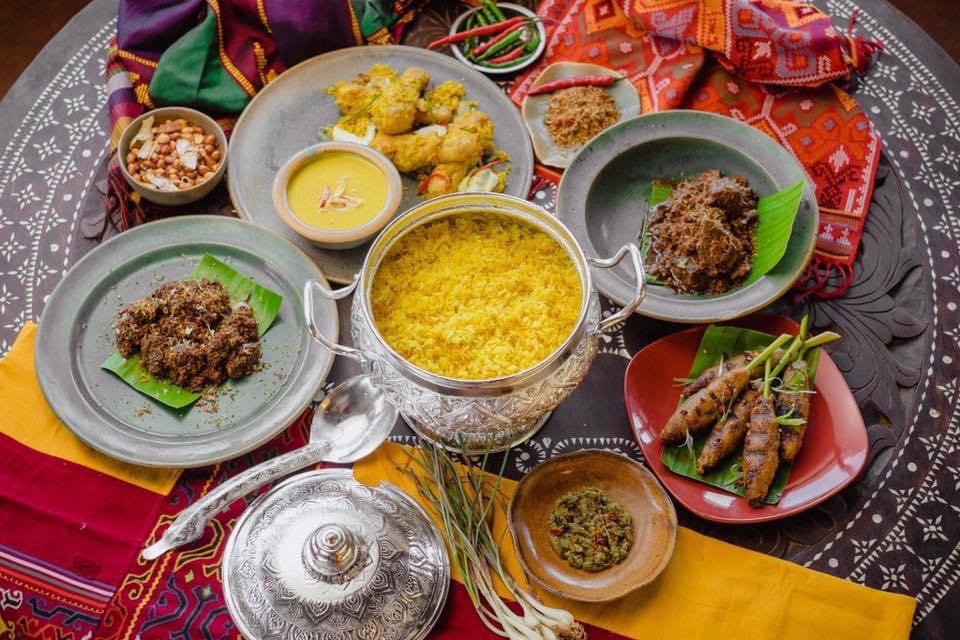 Maranaos are known for adding spicy flavors in their food and palapa also concludes as mainstream ingredient in most of their popular dishes like pyaparana manok (chicken with coconut meat), beef randeng (beef with coconut), bakas (tuna fish), and badak (jackfruit) with coconut milk and powdered turmeric [kalawag], which adds a yellowish color that sets their food apart food from other Muslim Mindanao cuisines.

The month-long celebration also highlighted the Maranao’s special ‘kakanin’ delicacies, most of which are made from sticky rice flour with coconut milk and brown sugar that will surely take you on a sweet spin such as dudol, tamokansi, tiyatag, pabrot, and so on.

Along with the support of the BARMM Government, through its Ministry of Trade, Investment and Tourism (MTIT), other cultural organizations and local governments, the Bangsamoro continue to imbibe and preserve their rich and colorful culture for the world to see and experience. (Johaira Sahidala)