The storm and the old mango tree 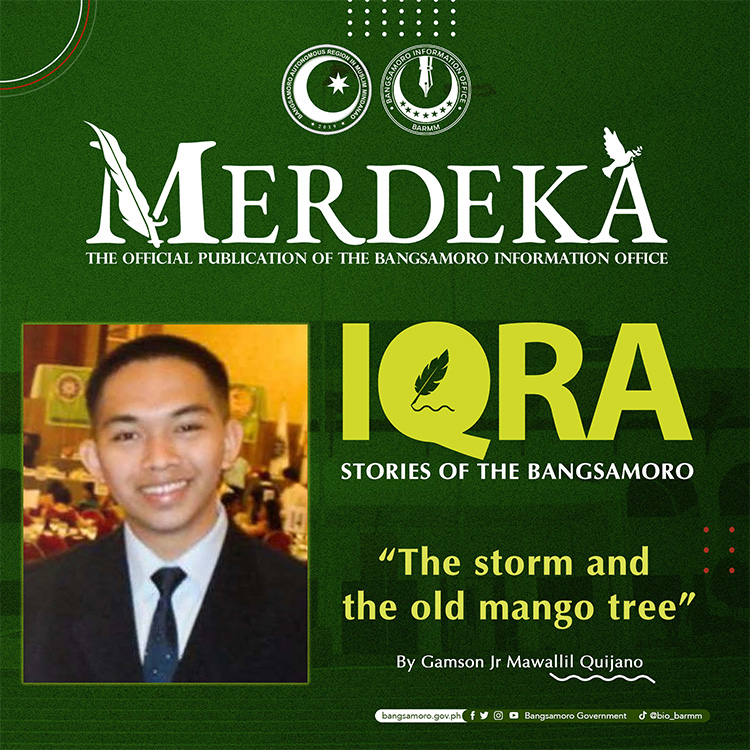 Inside the complex of our house in Jolo, Sulu, there was a huge old mango tree.

It’s even taller than our archaic house. Its branches were delicate and almost drooping. I believe it’s even older than my great grandparents.

Every afternoon, we used to play under its shades. Any one of my elders would yell at us, “Don’t play underneath that tree.”

When there was a storm, especially during the night, there were also blackouts. My mother would be worried about us and our safety. Because once any of the branches of the mango tree would fall onto the roof of our house, the roof would be immensely wrecked and all of us in the room would be hurt.

So, what we would do was to leave our room and go to the safe place of the house like in the sala or just downstairs bringing with us our gas lamp or candles.

On a stormy dark night, we could vividly hear the rustling of leaves of the trees and its branches sounding about to fall. My mother would become even more anxious about us.

Likewise, some of the mango fruits would fall and din on the roof of our house. We couldn’t sleep until the storm subsided.

Furthermore, during the downpour, there were roof areas in our home where rain pours down so strongly; we would position big empty containers to contain rainwater, so that it would not spill all over the house.

Had it not been just because that mango tree was so old and fragile yet posing such a great danger to us, it would have been best to keep it because its fruits were so delicious.

We used to call its huge and tasty fruit Mangga karabaw not because of its size but because it’s what it is!

Every morning, I used to pick a few of its fruit from the ground after it has fallen at night but others were already bitten by bats!

I do miss our great mango tree because it was an important part of my childhood life. I remember it was planted at the back of our home together with star apple, guava, and iba’ trees.

Eventually, in the interest of safety, our elders decided to cut it down. It felt like a piece of me was cut off, too!

Author’s bionote:
Gamson Jr Mawallil Quijano of Sulu is a registered Radiologic Technologist who works in Doha, Qatar. He is a contributor in Mindanawon Abroad of MindaNews through a column “Tausug In Doha.” He has published essays, poems, photo stories, and Tarasul (Tausug form of poetry) in MindaNews, Mindanao Examiner, The Zamboanga Post, Philippine Muslim Today, The Ranao Star, Mindanao Times, Edge Davao, Mindanao Today, and Mindanao Post. Three of his poems entitled “Magma”, “Twilight” and “Northern Lights” have been published in Poetry 365 by RDW World Publisher. He also belongs to the Tulawie Clan of Sulu. He is one of the great-grandchildren of Mohammad Tulawie, one of the greatest Tausug Muslim pioneer educators who made the Tausugs realized the value of education during his time.
Category: Photo NewsBy Bangsamoro Information OfficeDecember 28, 2022
Share this post
Share on FacebookShare on Facebook TweetShare on Twitter Pin itShare on Pinterest Share on LinkedInShare on LinkedIn