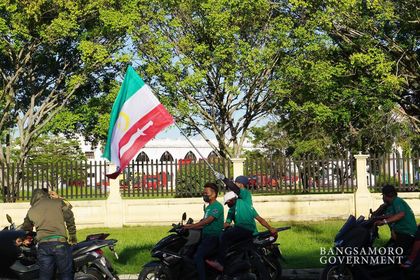 COTABATO CITY—Chanting “Allahu Akbar” (God is Great), a number of motor riders from Cotabato City passed through the city’s major streets early morning today to show their support to the city’s turnover to Bangsamoro Government.

Almost two years after its inclusion to the Bangsamoro region, these supporters expressed their delight on the sought-after turnover, while waving the Bangsamoro flag and wearing green shirts.

Among the riders was Saudin Angas, who lives in Barangay Poblacion II in this city.

Speaking in Maguindanaon, he said the turnover will open more opportunities to the city.

“This is a milestone for every Moro people. At last, the city is now part of the Bangsamoro region,” Angas said.

Later today, national officials will turn over the city’s supervision to the Bangsamoro Government’s Ministry of the Interior and Local Government (MILG-BARMM).

Secretary Eduardo Año of the Interior and Local Government, Secretary Delfin Lorenzana of the National Defense, Chief Debold Sinas of the Philippine National Police, and other key officials will turn over the city to BARMM’s top officials.

Chief Minister Ahod Balawag Ebrahim released a statement on Saturday, December 12, saying the plebiscite in January 2019 for the city’s inclusion “revealed the will of the majority of the people in Cotabato City.”

“Through this process, they democratically signified their desire to join the rest of the region in our shared quest for lasting peace, development and right to self-determination,” Ebrahim added.

Cotabato City will be the region’s third city, along with Lamitan City in Basilan, and Lanao del Sur’s capital Marawi City.

It has been the regional administrative seat of the replaced Autonomous Region in Muslim Mindanao (ARMM), yet it had not been part of the region due to its non-inclusion vote during the plebiscites in 1989 and 2001.

However, on January 21, 2019, a majority of 36,682 residents of Cotabato City voted in favor of joining the newly formed BARMM, signifying a new hope for a more progressive region. (Bureau of Public Information)