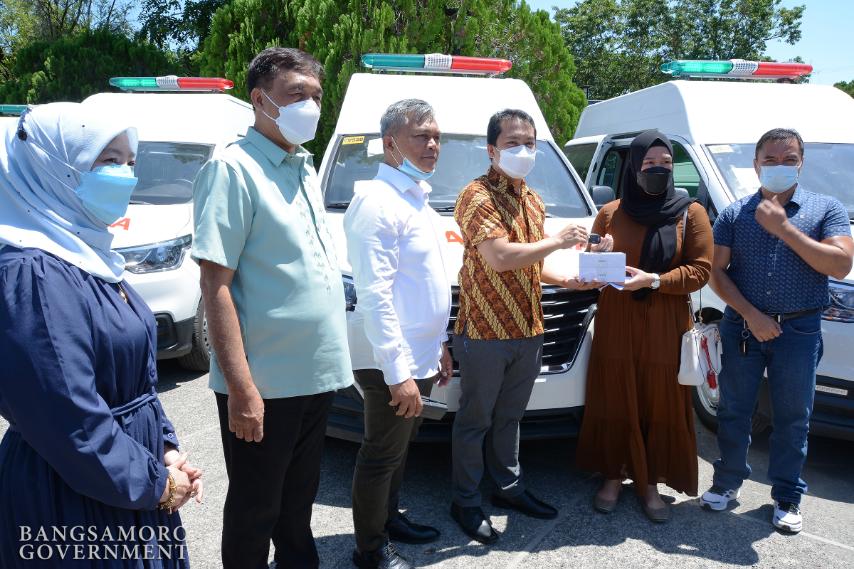 MOH Minister Dr. Bashary Latiph led the turnover of ambulances to towns and a hospital in Lanao del Sur

COTABATO CITY — Bangsamoro Government’s Ministry of Health (MOH) turned over eight (8) units of ambulance to seven towns and a hospital in Lanao del Sur province on Friday, April 30, in this city.

MOH Minister Dr. Bashary Latiph said the ambulances will help address Bangsamoro people’s lack of transport to hospital that in turn will prevent the loss of lives in traumatic and critical incidences.

“Those ambulances will not only serve as a medical aid for the Bangsamoro people but is a sign of assurance that the government and our medical staff will always be available to treat and prevent life-threatening incidences,” Dr. Latiph added.

On March 25, two units of ambulance were turned over to Sulu’s Provincial Hospital and one unit each for the rural health units (RHUs) in the municipalities of Panglima Estino, Luuk, Talipao, and Old Panamao in the province. Basilan province also received three units of ambulance for the RHUs of Hadji Mohammad Ajul, Akbar, and Tuburan towns.

Meanwhile, on April 7, MOH turned over two units of ambulance and one unit of sea ambulance to the Integrated Provincial Health Office of Tawi-Tawi.

“By providing those ambulances, we have increased the efficiency of our health community system and improve health initiatives in the Bangsamoro,” Dr. Latiph said.

The units were procured by the Office of the Chief Minister (OCM) under the Health Facility Enhancement Program (HFEP) 2019 of MOH of the Bangsamoro Autonomous Region in Muslim Mindanao (BARMM).

“The Government of the Day is dedicated in providing efficient medical services to the Bangsamoro,” Ebrahim said. (Bangsamoro Information Office)